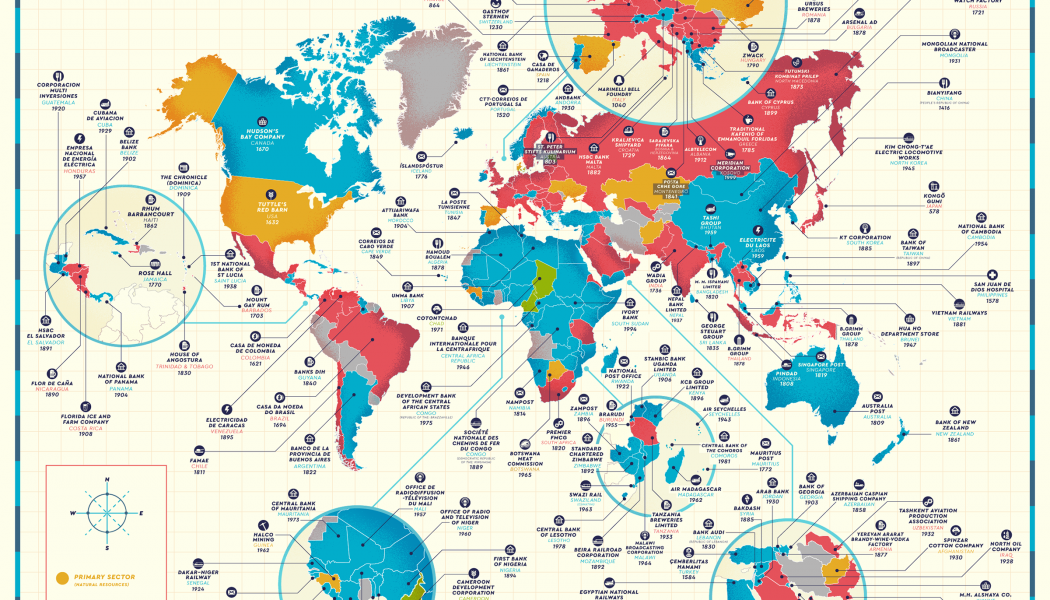 While many of the companies that feature so prominently in our daily lives (Google, Apple, etc.) are relatively new, many companies around the world are pretty old — older than countries like the US, in fact — and a few of the oldest have actually been in operation for more than 1,000 years.

If you want to know which companies are actually the oldest around the world, you can check out this map from Businessfinancing.co.uk, that shows the oldest company in each country that is still in business. See a full-size image of the map here.

And in greater detail, here are maps that show the oldest company in each country by continent. It should be noted that the maps are not exhaustive and do not include data on every single country and that when it comes to determining what business is the “oldest,” there’s always plenty of room for debate.

The oldest company in the world is Kongo Gumi, a temple construction company in Japan that was established in 578 AD and remained a family-run business until it became a subsidiary of another company in 2006.

Also quite old is Stiftskeller St. Peter, a restaurant in Salzburg, Austria that was first documented in 803 AD by the scholar Alcuin. And in Germany, the winery Staffelter Hof dates back to 862 AD, and is one of the oldest wineries in the world.

It’s, of course, necessary to take maps like these with a grain of salt — there a lot of countries and a lot of opportunities for mistakes — but overall, it’s very eye-opening to learn that there are many companies around the world that have been operating for more than hundreds of years. And if you’re curious about the data behind the maps, here’s a Google Sheets link that shows the sources for every country.