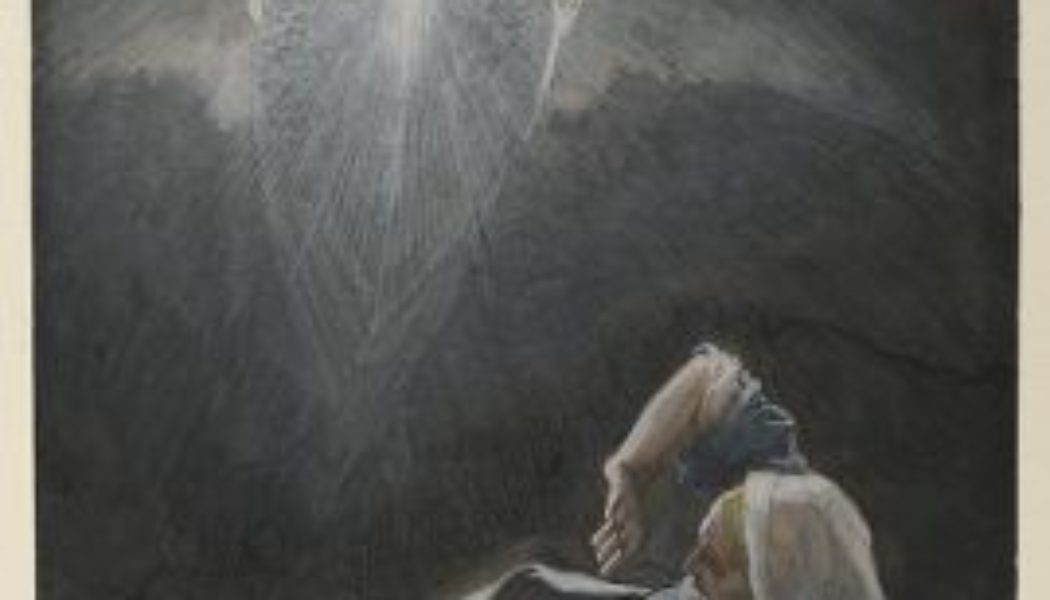 Our Gospel this final Sunday of Advent centers on St. Joseph. It recounts how St. Joseph received the stunning revelation of Mary’s pregnancy. We can learn from the great saint’s response — from his openness, his obedience, and his one word.

Mary was already Joseph’s wife when she conceived her child. In their Jewish culture, a newlywed couple would live apart for the first year of marriage. Thereafter, the husband would bring his betrothed into his home to live with him. When Mary conceived a child (whom Joseph knew was not his) why did he decide to divorce her? Was Joseph heartbroken because he believed she had betrayed him? Or was Joseph frightened, because he believed her story of the Annunciation and thought himself unworthy of this holy woman and her holy child? Whatever the case, Joseph was a righteous man and unwilling to expose Mary to shame, so he intended to divorce her quietly.

Then an angel of the Lord appeared to him in a dream and said, “Joseph, son of David, do not be afraid to take Mary your wife into your home because it is through the Holy Spirit that this child has been conceived in her. She will bear a son and you are to name him Jesus, because he will save his people from their sins.” Once Joseph awoke, he did as the angel of the Lord had commanded him and took Mary into his home.

I used to fret very much about precisely discerning God’s will. “What if the Lord wants me to do a specific thing but I can’t figure it out?” During my college and seminary years, I thought I had a vocation to the priesthood but how could I be sure? I worried, “What if I get this discernment terribly, terribly wrong?” Then a holy friend gave me peace of mind by pointing to St. Joseph. When Joseph was about to make a terrible mistake by separating himself from Mary and Jesus, it only took one night’s dream to get him back on the right track because Joseph desired to do whatever God willed. God can easily redirect a willing heart.

People sometimes complain, “I wish God would just tell me what to do!” But unless we are open to doing God’s will, what good would his directions do us? Imitate St. Joseph in his openness. Like with the Blessed Virgin Mary, Joseph’s openness allowed God to do great things through him. So resolve your will and pray for the grace to always be open to God’s will like St. Joseph. Another St. Joseph trait of we can imitate and profit from is his simple obedience.

St. Matthew’s Gospel records, “When Joseph awoke, he did as the angel of the Lord had commanded him and took his wife into his home… and he named [the boy] Jesus.” On this occasion, like later when told to flee to Egypt or told to return to Israel, Joseph does point-by-point what God commands. Like Moses in the Old Testament, whenever God instructs Joseph to do (A) and (B) and (C), the author notes how Joseph then does (A) and (B) and (C).

Moses and Joseph’s duties were different from ours today. We will not construct an Ark of the Covenant, nor protect and provide for the Holy Family, but each of us has persons and tasks entrusted to us by God; people to care for and works to be done. You already know a great deal of what God has commanded you to do; your own (A) and (B) and (C) according to your state in life. You will not fulfill your missions perfectly—and that’s OK—but imitate St. Joseph in his simple obedience because your basic, God-given duties are more important than you realize.

A third and final feature of St. Joseph reflected in today’s Gospel is his single word. Did you ever hear that in all of Scripture there are no recorded quotes from St. Joseph? It’s true: Jesus has many, Mary has several, but Joseph has none. Now there is no evidence that St. Joseph lacked the ability to speak or ever took a vow of silence.  Joseph probably said many things that were simply not written down. Yet today’s Gospel contains the strongest evidence of his having said any one particular word. What was that word?

The angel in Joseph’s dream said of the unborn child: “You are to name him Jesus.” And when Joseph awoke, he did as the angel of the Lord had commanded him. Joseph named him Jesus. The name of Jesus was St. Joseph’s greatest and most important word. Ever after, the name of Jesus defined his life.

Learn from St. Joseph, the husband of Mary and foster-father of Jesus. Imitate his openness to doing God’s will whatever it may be. Benefit from practicing his obedience in your daily duties. “And whatever you do, in word or in deed, do everything in the name of the Lord Jesus,” like St. Joseph did.

This entry was posted on December 18, 2022 at 3:11 pm and is filed under Blessed Virgin Mary, Chrisitian Virtues, Christian Perfection, Discipline, Faith, Homily, Love, Moses, Nativity, St. Joseph, Sunday Homilies, Trust, Work. You can follow any responses to this entry through the RSS 2.0 feed. You can leave a response, or trackback from your own site.

You always want to be able to discover the ideal birthday gift whenever someone you know celebrates a birthday. 507 music (copy). Absolutely satisfied with the service ommik provides.