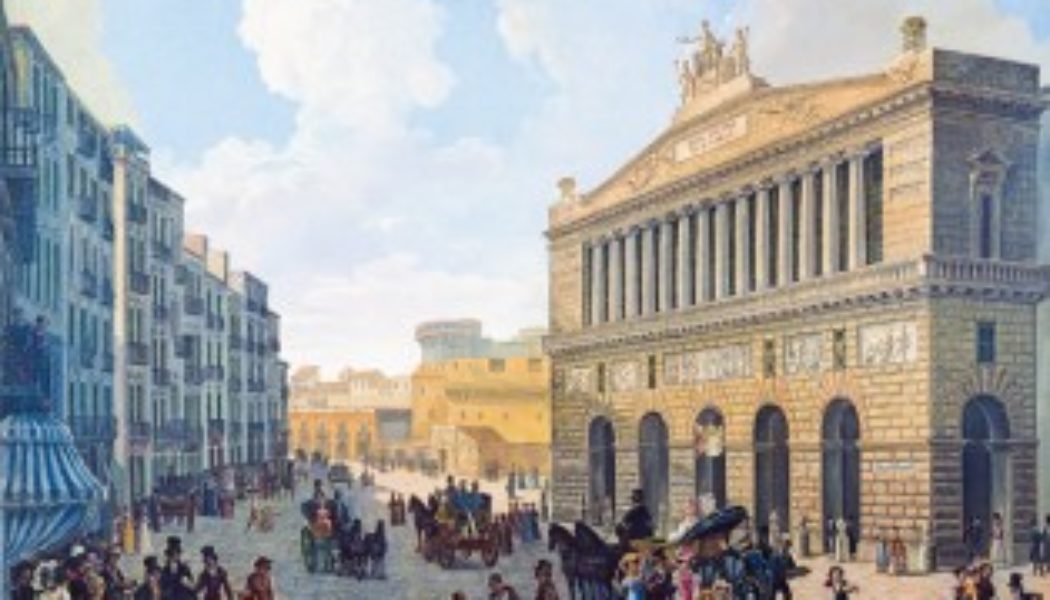 Lenten penance pertains to more than simply fasting from food and drink. It also entails curtailing the “delight of the eye” and pleasing sounds, which gratify our senses. Mortification means dying to ourselves and devoting more time to prayer and penance. This effort could be undone by continued immersion in pleasurable amusements, even if seemingly innocuous. In early modern Italy, to honor the Lenten season, one of the most popular public amusements of the day, opera, was temporarily prohibited, along with any other “spectacle.”

Opera originated in late 16th century Italy, with Claudio Monteverdi being the first major composer to take up this new form, setting music to a libretto on the mythical and musical story of Orpheus (Orfeo), which premiered for the city of Mantua’s Carnival celebration in 1607. Opera was a sumptuous affair, with its luscious vocal music accompanied not only by a musical ensemble but with actors in costume, with elaborate sets and eventually beautifully constructed opera houses. Truly a “spectacle” for the senses and imagination! If Monteverdi, who later became a priest, wrote this famous opera for Carnival, could there be a counterpoint for Lent?

Enter the Oratorio. It wouldn’t be too far from the truth, although overly simplistic, to describe oratorio as a religious opera. It maintains the drama of telling a story through characterized song, although sans costume, acting, and scenery, and, rather than the historical stories of myth or romance, it turns attention to the religious themes of the Bible, saints, and allegory. It maintains much of the artistic appeal of opera, while turning to edifying themes, meant to stimulate meditation during Lent rather than provide entertainment (although I’m sure it kept much of that appeal).

The oratorio originated at and took its name from St. Philip Neri’s Oratory in Rome, which contained a music hall. It was a perfect location, the center of Counter Reformation in Rome. The first oratorio (although yet more akin to an opera) was performed there in the year 1600, actually predating Monteverdi’s famous Orfeo: Emilio de Cavalieri’s Rappresentatione di Anima, et di Corpo, an allegory of “The Portrayal of Body and Soul,” a work considered a key part of the development of opera and oratorio both. Early oratorios focused heavily on dialogue, as in the religious conversations of holy figures, such as the short ones composed by Pietro della Valle in the following decades. Sometimes short oratorios would be grouped around a sermon.

The oratorio caught on, although as it developed it grew in length to become more like a sacred opera, as can be seen in the compositions of Alessandro Scarlatti and Antonio Vivaldi, such as the latter’s Juditha Triumphans. Although Handel won fame in England as a composer of opera, he shifted to writing oratorios in 1730s, beginning in Italian, like his operas, although he wrote most of his 25 oratorios to English librettos. Although we associate his Messiah with Christmas, the theme of the first part, it was actually performed in the Easter season (the Alleluia chorus, of course!), with its premier at St. Patrick’s in Dublin on April 13, 1742. Joseph Haydn preserved the connection of the oratorio to Lent by premiering his choral version of his Seven Last Words of Christ on Palm Sunday in 1798 and his Creation during Holy Week on March 19, 1799. With such lavish music, it would be appropriate to wonder if the opera was replaced by the oratorio only to have the latter become just as thrilling, even while engaging a holier theme.

Some of the great oratorios, however, have profound spiritual depth. The greatest of them, in my opinion, are Bach’s Passion oratorios, performed during Vespers on Good Friday. No one could accuse Bach of writing these Passions to entertain, as they speak of language of holy sublimity. Although he composed five (reworking them over a twenty-six year period), only two complete sets composed by him have come down to us, from St. Matthew’s and St. John’s Gospels. The oratorios set the Gospel text to music, with accompanying poetic commentary and chorales. Written in two parts, they preserve the earlier structure of building the music around a central sermon. They also preserve a somber note for the holy day by excluding a more festive sounding brass.

Oratorios maintained their prominence beyond the Baroque period. One particularly noteworthy example can be seen in the adaptation of St. John Henry Newman’s poem on death and purgatory, The Dream of Gerontius, in 1900 by Edward Elgar (although Elgar did not consider it an oratorio, but, oh well, many people consider it one anyway). Not only is it noteworthy from an artistic and spiritual point of view, it also brings the genre back to its origin with the Oratorians, the order founded by St. Philip Neri. Following his conversion, Newman chose the Oratory during his studies in Rome, drawn to it as a stable place to build relationships and to evangelize, including through music, founding an oratory in Birmingham on his return to England. It is only fitting that Newman’s text became a modern expression of the musical form that originated at the original oratory.

During Lent, try fasting from entertainment and turn to the oratorio for something more edifying. You could start with the examples I gave above: Vivaldi’s Juditha Triumphans, the second part of Handel’s Messiah, Haydn’s Creation, Bach’s St. Matthew Passion, or Elgar’s The Dream of Gerontius.