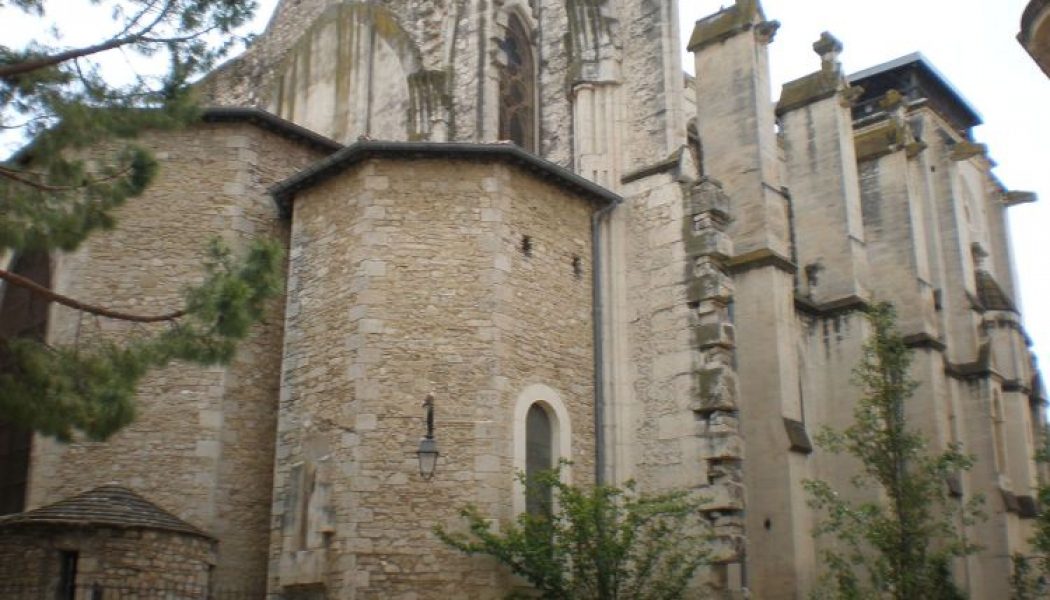 I stumbled across the pilgrim plague survivor, St. Rocco, when I was 15. It was my first time in Europe, visiting my aunt who was studying at the University of Montpellier (founded c. 1292) in southern France. I hadn’t heard of Rocco before, but I found myself praying in his hometown church, the very first medieval church I visited.

St. Rocco (Roche or Rock) lived in the mid 14th century during the outbreak of the Black Death. He was orphaned as a young man and renounced his inheritance before his uncle, the lord of Montpellier. He set out as a pilgrim for Rome, but stopped to serve plague victims along the way, healing the sick through prayer. After visiting the Eternal City and an audience with the pope, he came down with the plague himself, the reason most depictions of the saint show a boil on his leg. He took refuge in a self-made hut, where a dog brought him food, whose owner eventually nursed the saint back to health. After recovering, he returned home only to be thrown into prison for five years, suspected as a spy. Weakened to the point death, a miraculous light shone from his cell, leading to the discovery of his true identity, confirmed by his birthmark in the shape of a cross.

Throughout the 15th century, St. Rocco became known as a great defender against the plague, even to the point of averting it from the Council of Constance in 1414. For this reason, he also became a popular patron for confraternities dedicated to serving the sick. Somehow the Venetians, already known for secretly securing the relics of the Evangelist St. Mark, obtained his relics. They did him justice with a noble church to entomb him and a major confraternity in his honor to serve the sick, itself headquartered in a masterfully designed building, the Scuola Grande.

At this point another great figure, the painter Tintoretto, Mannerist master of the Venetian Renaissance, enters the scene. It is thought that Tintoretto (1518-94) may have survived the plague, leading him to dedicate many years to painting for the Scuola in honor of St. Rocco, executing many works for little or no money. He completed fifty paintings from the years 1565 to 1588, covering scenes from the Old Testament, the life of Christ, and miracles of St. Rocco. The large crucifixion he completed there is among the most admired works of the entire Renaissance. The scuola served as a center where the rich of Venice met to coordinate their efforts to serve the sick and plague stricken. Many of Tintoretto’s paintings reflect this effort.

Here are two paintings in the main salon (or meeting room) focused on healing. The first, from the ceiling, focuses on the plague of serpents that struck the Israelites in the desert in response to their murmuring and disobedience. The bronze serpent erected by Moses, a type of the Cross, can be seen on the left, a sign that led to healing from the poisonous bites. The other scene can be found on the wall, focused on Christ’s healing. It presents the healing of the paralytic, though it includes many other infirm figures, including a woman with a sore visible on her thigh, a sure sign of the plague. Like the healing of St. Rocco, it indicates faith in Christ’s power over sickness and disease.

Why did Venice honor St. Rocco so extravagantly? The city sought out a great patron to help it in its sickness. Rocco’s simplicity inspires the imagination–a man unafraid of sickness and embodying faith in Christ’s power to heal. His life is a sign of pilgrimage: embodying detachment, humbly enduring suffering. As we suffer a pandemic, it’s a good opportunity to come to know St. Rocco and to ask for his intercession. Through the prayers of St. Rocco may this sickness cease and, more importantly, may our hearts turn to the Lord.

Prayer to St. Rocco against Disease

O Great St. Rocco,
deliver us, we beseech thee,
from the scourges of God;
through thy Intercession,
preserve our bodies
from contagious diseases,
and our souls from the contagion of sin.
Obtain for us salubrious air;
but, above all, purity of heart.
Assist us to make good use of health,
to bear suffering with patience;
and, after thy example,
to live in the practice of penance and charity,
that we may one day enjoy the happiness
which thou has merited by thy virtues.

And it shall come to pass, if thou shalt hearken diligently unto the voice of the Lord thy God, to observe and to do all his commandments which I command thee this day, that the Lord thy God will set thee on high above all nations of the earth.
Deuteronomy 28:1
DailyVerses.net

Working from a Place of Rest

Thomas Howard and the wonder of our earthly and heavenly homes…

Flannery O’Connor is an antidote to our own unraveling…