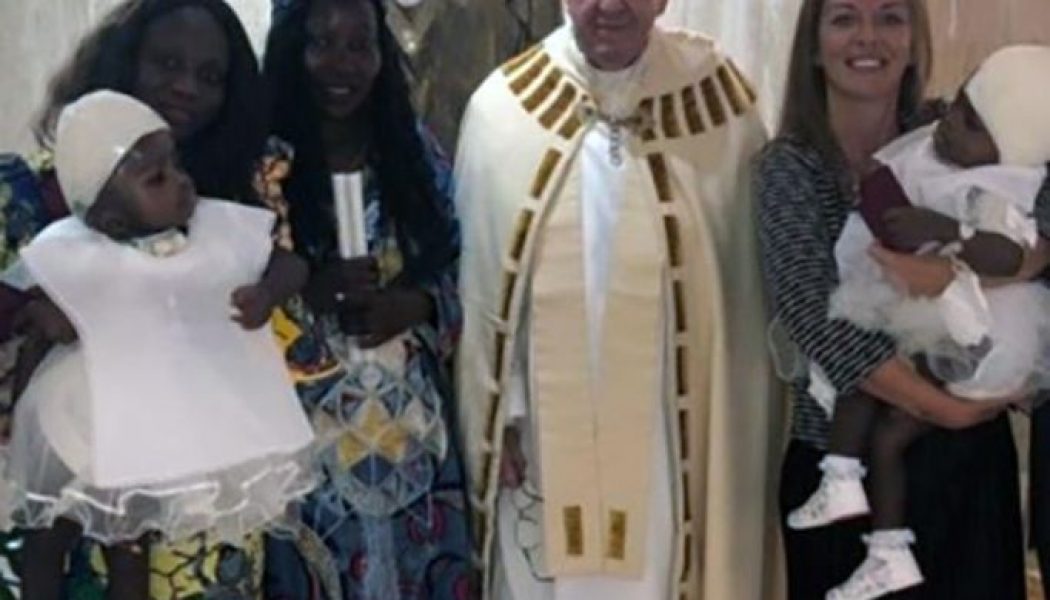 COMMENTARY: The fact that the 2-year-old girls were not baptized earlier, by someone else, suggests an inexplicable pastoral failure to heed Pope Francis’ stress on the supreme importance of the sacrament.

A remarkable story from Rome is both an astonishing tale and something of a pastoral puzzle. Pope Francis inspired the former and listening more carefully to him would have avoided the latter.

Conjoined twins Ervina and Prefina Bangalo were separated in a complex surgery at the Vatican’s pediatric hospital, Bambino Gesù, on June 5. The children’s mother, Ermine Bangalo, then expressed a wish to have the twins baptized by the Holy Father himself. Pope Francis did so in the chapel of his Santa Marta residence on the feast of the Transfiguration, Aug. 6.

“If we had stayed in Africa, I don’t know what fate they would have had,” Ermine said of her little girls. “Now that they are separate … I would like them to be baptized by Pope Francis, who has always taken care of the children of Bangui.”

The girls’ most delicate surgical separation in Rome had its roots in the Holy Father’s 2015 visit to Bangui in the Central African Republic, one of the poorest countries on the planet. As a fruit of his visit, Pope Francis asked that an initiative be taken to help the children of Bangui. Such gestures sometimes accompany papal visits; the Ephpheta School for the Deaf was started in Bethlehem after a request from Pope St. Paul VI, who visited the Holy Land in 1964.

The desire of Pope Francis led to a children’s hospital being established in Bangui, built with the help of Bambino Gesù in Rome. Mariella Enoc, president of Bambino Gesù, was visiting the Bangui hospital in July 2018 when she met the twins, born the previous month in a village about 60 kilometers (37 miles) away. She made the decision to bring the babies to Rome to explore the possibility of separation surgery.

The twins were joined at the back of the head and shared both cranial bones and veins. Three complex surgeries were done over the course of more than year to effect the separation. The final surgery in June 2020 took some 18 hours and involved an enormous team of specialists, surgeons and anesthesiologists.

It is expected that now the twins will be able to grow up in good health.

The inspiring tale of how the Vatican’s hospital saved poor twins from the heart of Africa began in the pastoral heart of the Holy Father for the suffering and the poor. The Bangui visit of 2015 was remarked at the time for its courage; the security situation in the war-torn country was not absolutely stable. But Pope Francis was determined to go, and the result of the visit is a concrete improvement in the health care for the country’s most fragile, sick children.

It’s possible to wonder, though, if another part of the Holy Father’s message did not quite get through to Bangui, or even the short distance from the Santa Marta residence to Bambino Gesù.

From early on in his pontificate, a distinctive refrain of the Holy Father’s had been that Catholics should remember the day of their baptism and celebrate it. It’s at least as important as a birthday, which every culture remembers and celebrates.

Pope Francis has encouraged adults to check with their parents, or to consult the family records, to learn the date of their baptism, which most people do not know. Commemorating baptismal anniversaries will remind Catholics of the supreme importance of baptism, the Holy Father believes.

Ervina and Prefina Bangalo will not forget the anniversary of their papal baptism. And it may be that Pope Francis chose an important feast day for the baptism to help them remember.

A pastoral puzzle remains. How is it that the pastors, chaplains, doctors and nurses caring for the Bangalo twins in Bangui and in Rome did not see to it that the girls were baptized long before they turned 2 years old? No child in good health should have a baptism delayed for that length of time. Children in danger of death, or gravely sick, should be baptized immediately, even by the parents or medical personnel without waiting to call a priest. Certainly, any baby undergoing serious surgery should be baptized beforehand.

The Bangalo twins were in contact with Bambino Gesù since July 2018. It is likely the Vatican diplomatic corps assisted with their transfer from Bangui to Rome. Certainly Bambino Gesù has chaplains regularly on site. Any Catholic pediatric hospital should, as a matter of routine procedure, encourage Catholic parents to have their children baptized and be able to assist with the sacrament at a moment’s notice.

How is it that in the mammoth multiyear, international effort to separate the twins physically from each other, their eternal union with God was apparently overlooked? Did no one hear the Holy Father’s frequent exhortations to remember our baptismal dates? Did it not occur to someone along the way that there can be no baptismal anniversary to celebrate if there is no baptism in the first place? It appears that an outstanding medical success was accompanied by a rather staggering pastoral failure.

Perhaps there is a reasonable explanation. If so, it would be good to discreetly let it be known. It may be that the anomaly of children undergoing multiple surgeries in the Vatican’s pediatric hospital without baptism was the reason that the Vatican itself did not announce the baptism. It was posted to social media by a politician from the Central African Republic.

I expect that when the request for baptism reached the Holy Father’s desk, he was shocked and chagrined that the children had not been baptized at this late date. No doubt he instructed his officials to see that everything was arranged quickly.

There is no doubt that the papal baptism is somehow fitting for girls rescued by a papal initiative, all the more so as the babies were born on the 2018 Solemnity of Sts. Peter and Paul, the patrons of Rome.

But how did it ever come to that?