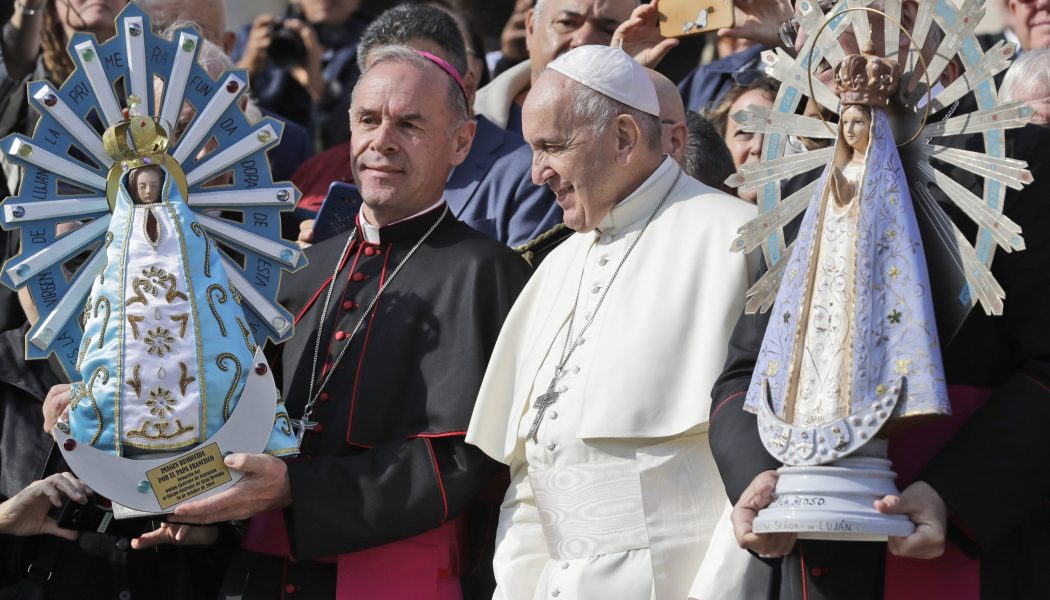 SANTA FE, Argentina – Pope Francis heads tomorrow to the Italian city of Assisi to celebrate the feast day of St. Francis, and to sign his new encyclical letter on human fraternity. It will be his first trip outside of Rome since the COVID-19 pandemic forced him, and most of the world, into lockdown.

Yet back in his home country, where the coronavirus crisis is far from over, hundreds of thousands of his fellow Argentines won’t be allowed to leave their homes for a yearly pilgrimage he used to take to the shrine dedicated to Our Lady of Lujan, patron of this South American nation.

The annual manifestation of popular devotion, known as the Youth Pilgrimage to Lujan, takes place during the first weekend of October, and sees hundreds of thousands walking the 40 miles that divide the Shrine of St. Cajetan, in Buenos Aires, from the church in Lujan built to honor a 14-inch-tall terracotta image of Our Lady of the Immaculate Conception that has been venerated in Argentina since its arrival in 1630.

When he was still the Archbishop of Buenos Aires, then-Cardinal Jorge Mario Bergoglio would go to Lujan often, including the first weekend of October, when he would welcome pilgrims, hear confessions, celebrate Mass and even join pilgrims in their walks during the night.

The future pope explained the importance of the Lujan shrine in 2008, during the feast of St. Cajetan, venerated in Argentina as the patron saint of bread and work.

God is the only one capable of “convoking to build a place for everyone. Here, in St. Cajetan it’s demonstrated, as it is in Lujan too … These are homes for everybody. A sacred place.”

“These are places for everyone,” he insisted, because these shrines are places built with faith, with a “pure vision, with no envy, a look of hope placed only in God.”

In these shrines, Bergoglio said, everyone is welcome, no one is excluded and there is no fighting. It’s a place built “by work filled with the love of all the workers – men and women – of our nation, those who wake up every day and go to work, those who don’t steal but work.”

The traditional walk to Lujan has been suspended in an effort to tackle the spread of the new coronavirus that’s killed close to 20,000 people in this country, the ninth in the world in terms of confirmed cases.

The idea of making this 46th pilgrimage virtually “arises from a need,” said Father Lucas Garcia, rector of the Basilica of Our Lady of Lujan. The need, he said, is the desire pilgrims have to encounter the Virgin.

“There are many promises and thanksgivings done in these pilgrimages, and as is the case when we assume a commitment, people want to carry them out, so we’re trying to offer them an alternative way of doing so,” he told Crux on Monday.

They looked into different ways of doing the pilgrimage this year, and “unfortunately, we came to the conclusion that this is the best way,” Garcia said. “It’s not the one we liked the most, but it’s the one we could do under the circumstances.”

Juggling between being careful amidst a pandemic and fulfilling the “covenant of love” is a challenge, he acknowledged: “This year the streets will be empty, but our hearts will travel to Lujan. For her part, as she always does, Our Lady will listen to us, will embrace us (as the motto says), bring us closer to Jesus and encourage us to continue walking.”

“It will be different, but we hope it will bring many fruits for all the People of God who will pilgrimage throughout Argentine,” Garcia said.

The motto for this year’s edition, “Mother hug us, we want to continue walking,” is in many ways, ironic, but organizers choose to stand by it.

In a video he sent to the pilgrimage to a local shrine dedicated to Our Lady of Lujan in southern Argentina, Pope Francis referred to it: “Sometimes the road becomes difficult, and not only sometimes, ordinarily it can be difficult. And in these moments of the pandemic and so much threat to health, so much fear, so many needs, it is even more difficult.”

“That is why we need our Mother to embrace us, bring us together,” said Francis in the video sent to the 40th edition of the pilgrimage to Lujan in Centenario, that yearly takes place the last weekend of September.

The pope is a big fan of Our Lady of Lujan. So much so that he has an image of this Marian advocation overlooking his desk in the Vatican’s Apostolic Palace, where he welcomes the leaders of the world on a regular basis.

Father Fabian Baez has been participating in the pilgrimage since 1988, and several years accompanied the youth from the very beginning of the trajectory, as he ministered in the Shrine of St. Cajetan- today he’s the parish priest in a different church in Buenos Aires. He’s walked to Lujan with youth groups, has welcomed the pilgrims in the shine, spent nights hearing confessions and also handing out hot tea for the pilgrims.

“The on-foot pilgrimage to Lujan the first weekend of October is an event of faith for all of Argentina,” he told Crux. “To do a pilgrimage is to move and be moved, and many things happen during those long hours in the night spent walking. Especially in the heart.”

This year, won’t be an exception for Baez: he will take part in the pilgrim, even if there will be no actual walking involved.

“I like to think that this year, it will be a spiritual pilgrimage more than a virtual one,” he said. “With the hopes that we’ll be able to follow things through social media and other channels and still be moved towards God.”

This openness to participate in the on-line pilgrimage does not mean that not going to Lujan won’t be a challenge for Baez, who back in 2013 went viral when Francis took him for a spin through St. Peter’s Square in the popemobile during a Wednesday audience.

“It’s going to be hard because Lujan is Lujan,” he said, matter-of-factly. “It’s being there, spending hours walking or accompanying the pilgrims in prayer. It’s going to be hard not to go, but I will still to be a pilgrim online, as it’s what we can be in this very special year.”

For the priests of Buenos Aires, Baez said, taking part in this annual pilgrimage is basically a papal mandate: “Bergoglio always understood Lujan as an event from the People of God, and he would ask us priests to serve the People of God as it walks to Lujan.”

“He always said that the protagonists were two: Our Lady of Lujan, who’s the mother calling us to her, and the holy faithful People of God, walking home,” Baez said.

Asked if they’re expecting for Francis to send a message or some how “join” the virtual pilgrimage, Garcia dodged the question, saying that the Argentine pope doesn’t “join” the pilgrimage to Lujan, but is a “part of it.”

“He has always been a pilgrim of the Virgin,” Garcia said. “We know that Lujan is in his heart. He was shown so when he was cardinal of Buenos Aires, when he’d come every year and spend most of the night hearing confessions.”

On May 8, the actual feast of Our Lady of Lujan, Pope Francis sent a video message saying this year too, he would “look at her one more time, and once again, will let myself be looked at by her.”

“Surely, Francis will be virtually and spiritually with us,” Garcia said. “It’s very good for the Argentine people to feel his presence, as it encourages us and makes us proud. On our part, we’re called to pray for the pope, so we will have him in our prayers during the pilgrimage, sure that he will be praying for us too.”

The website for the pilgrimage says that this year, Mary “will walk to our homes, bringing us her love and protection,” and notes that, as has been the case since the beginning of the pandemic, the national shrine will remain closed.

“We want to tell you that this year, the pilgrimage won’t be as it has been thus far,” said Cardinal Mario Poli, handpicked by Francis to be his successor in Buenos Aires. “We have to pray a lot, but to do so from our homes. This year is different. Different because all the sanitary services are affected by COVID, the pandemic, and we cannot provide any service along the walk.”

This, in a nutshell, is why the pilgrimage has been cancelled: following social distance measures, and even wearing a mask could have been achievable. But the doctors, ambulances, members of the Red Cross and many of the 6,500 volunteers who every year tend to the thousands who walk for over 15 hours won’t be there to help. Neither will the security forces that accompany the mass of walkers.

Argentina has been in a virtual lockdown since late March, and despite restrictions limiting travel, COVID-19 has spread and the curve of contagion is still growing, showing no signs of slowing down.

Alas, this doesn’t mean that there won’t be some who will still venture the walk.

“The pact of love between the pilgrims and their mother is very strong,” Garcia said. “We’ve asked pilgrims not to come. This year, Mary is asking us for an even bigger challenge: to stay home, care for one another and not spread the virus even further.”

“Nevertheless, our job is to accompany the pilgrimage, that surpasses us,” he said. “It belongs to the People of God, so if somebody decides to walk, we won’t see them as a rebel: it’s a child who wants to visit their mother.”

The image of the shrine with its doors closed, Garcia said, “is painful for us,” but he still hopes he’ll be able to meet with the pilgrims online.