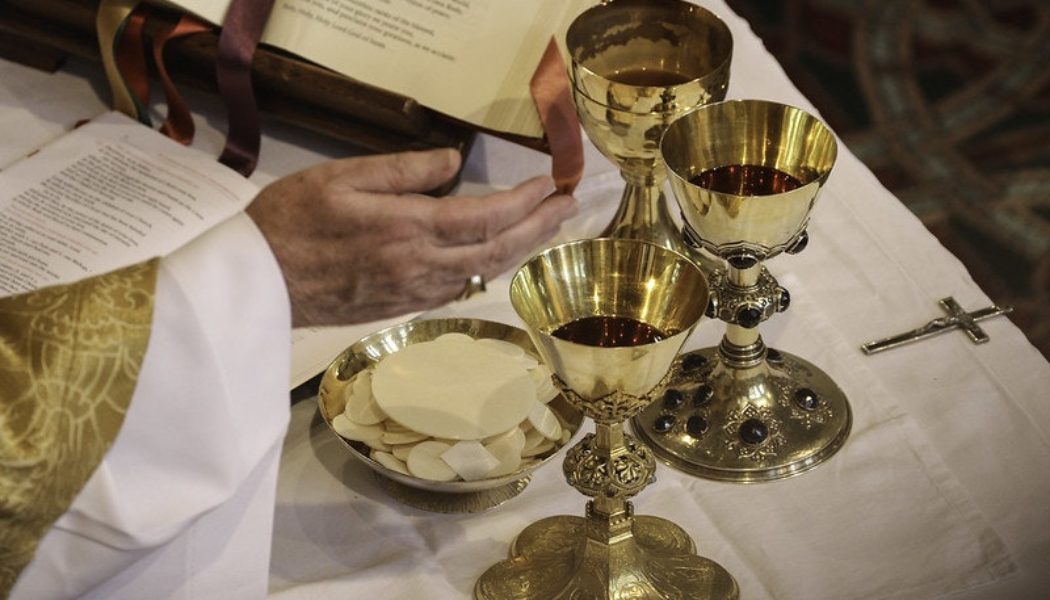 When the U.S. bishops meet next month in Baltimore, part of the business of their fall assembly will be to elect new chairs for five of their standing committees.

Often, these elections throw up candidates from recognizably different wings or strains of opinion within the conference, and set the tone for one school of thought or another to shape a committee’s work.

But this year, the race to chair the bishops’ liturgy committee features an interesting pair of choices, Archbishop Mitchell Rozanski of St. Louis and Bishop Stephen Lopes of the Ordinariate of the Chair of St. Peter. Neither appears an obvious selection for the job, which might suggest that some potential candidates have steered clear of running for a seat on the third rail of American ecclesiastical life.

Archbishop Rozanski has led the St. Louis archdiocese for just over a year, formally replacing Archbishop Robert Carlson in August 2020.

Probably Rozanski’s most public foray into liturgical and sacramental issues came in the months before his move to St. Louis, while he was still Bishop of Springfield, Massachusetts, and as dioceses across the world grappled with restrictions imposed by governments in response to the coronavirus pandemic.

In June 2020, Rozanski issued a controversial directive, allowing, effectively, for lay people, even non-Catholics, to administer the holy oil in the anointing of the sick.

Rozanski’s policy allowed for a Catholic chaplain to stand away from a patient’s bed, or even outside the room, dab a cotton swab with the sacramental oil, and then give it to a nurse or other attendant to take to the patient and administer.

The policy, while intended to provide some access to the sacrament for patients in pandemic isolation, drew strong criticism from theologians, who pointed out that the physical act of anointing by the priest is an intrinsic aspect of the sacrament’s valid application.

After the policy attracted national media coverage, Rozanski retracted the decision and instead told priests of the diocese that he was suspending administration of the sacrament altogether. On the same day, the USCCB’s committee on divine worship – the committee Rozanski is now seeking election to lead – issued a memo to all U.S. bishops clarifying that “with regard to the Anointing of the Sick, it is not possible for the anointing with oil to be delegated to someone else, such as a nurse or doctor.”

Bishops often offer themselves to serve on committees with whose work they have some expertise, or at least familiarity.

But while Rozanski’s June 2020 foray into liturgical and sacramental issues gives him familiarity with the USCCB’s liturgical committee, it will seem to at least some bishops casting votes next month an unusual prelude to a bid for leadership on the issue — especially since pandemic-related guidance remains a live issue the committee must deal with.

The other candidate for the position, Bishop Steven Lopes, also presents an unusual potential choice for the role.

Lopes was made a bishop in 2016, making him relatively young in the conference for a senior committee chair. Like Rozanski, he possesses no advanced degrees in liturgical studies, though he has studied sacramental theology. But perhaps most interesting is that Lopes doesn’t even lead an ordinary Latin rite diocese at all.

As ordinary of the Personal Ordinariate of the Chair of St. Peter, Lopes is responsible for shepherding former Anglicans who came into communion with the Church after Benedict XVI’s 2009 apostolic constitution Anglicanorum coetibus.

As such, Lopes’ daily liturgical life differs from that of his brother bishops. It revolves around the Anglican Use, a form of the Roman Rite of the liturgy which contains parts of the Anglican liturgical patrimony, including elements from the Book of Common Prayer, as well as prayers within the Mass taken from English translations of earlier Latin Rite missals.

Lopes’ experience of managing liturgical spaces also differs from that of his diocesan confreres.

The ordinariate has a much smaller physical footprint than most U.S. dioceses, managing fewer actual bricks-and-mortar churches and buildings, as many former Anglican communities gather in parish churches attached to the local dioceses in which they live. At the same time, Lopes’ flock is spread over a wider territory – including all of the U.S. and Canada – meaning the bishop has experienced differently the daily interactions with local governments and regulations which punctuated the pandemic liturgical life of dioceses.

Because it is not territorial, Lopes’ flock also has a higher degree of volitional Catholic identity than many territorial dioceses, which in the administration of liturgical issues must consider the needs and responses of the diverse group of Catholics who all happen to live in the same place.

As an example, consider that Lopes has likely had a very different experience than territorial bishops regarding disputes around the use of the Extraordinary Form of the Mass, which many ordinary diocesan bishops will need to navigate, among laity and clergy, in the months to come.

None of these circumstances, for either Lopes or Rozanski, are disqualifying, and they do not even mean either would prove ill-suited to the job of chairing the bishops’ liturgical committee, necessarily. But the fact that no bishop with a formal background in liturgical theology has allowed his name to go forward in the election is noteworthy, and may suggest that the committee’s work is now seen as something of a third rail in American ecclesiastical life.

Moving past the unique challenges of the pandemic year, in which the committee had to remind bishops that only priests can anoint the sick and that confessions could not be heard via cellphone, the committee is now likely to face pressure from to weigh in on diocesan implementation of Pope Francis’ summer document Traditiones custodes.

That document revoked substantial latitude for the celebration of the Extraordinary Form of the Mass and charged bishops with taking a much more active role in approving the use of the older missal on a case by case basis. While the intent of the document is reasonably clear, there are still a number of details which need clarification – like how bishops are to interpret the provision that EF communities not celebrate in parish churches.

Many, if not most, U.S. bishops have adopted a welcoming but cautious approach to the pope’s document, preserving the status quo in their dioceses for the time being, while engaging in periods of “study and reflection” on how best to implement it.

As those periods come to a conclusion, individual bishops are unlikely to want to stoke resentment or division in their own backyards, and may look to the conference to offer some common sense principles or recommendations, acting as a reference point for them as they move ahead.

While individual bishops might well welcome the divine worship committee working as a reference point, the committee itself, and especially its chairman, could well find himself a lightning rod for criticism from all sides.

That is an unenviable task, and it may be the reason for the unusual field of candidates in November. On the other hand, a willingness to take on the job might prove to be the best recommendation for the bishops in the race.

Expert hosting reviews and advice. As a live chat support agent, you can work from anywhere as long as you have an internet connection. However, the concept of buying and renting has been made easier with the advent of the internet.