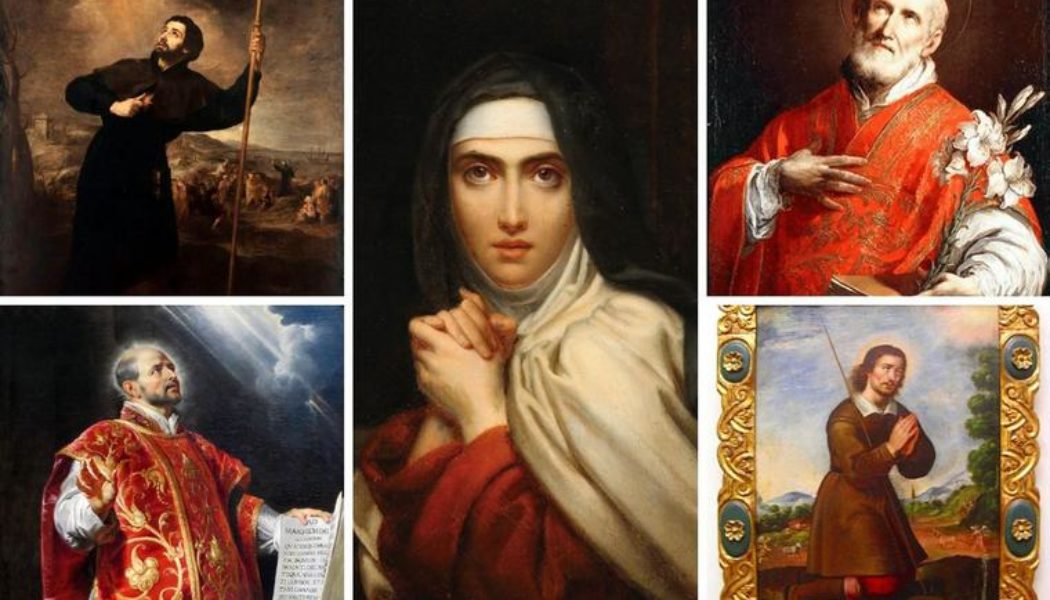 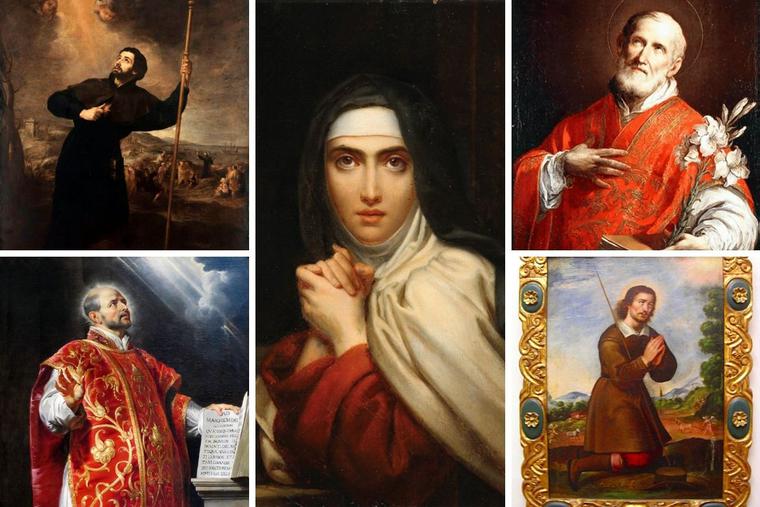 Think of Maria Goretti in 1950, where Assunta Goretti was the first mother ever to attend the canonization of her own child. Even more remarkable, Alessandro Serenelli, the man who murdered Maria, was also present, having had a complete conversion of life while in prison.

Or consider, 50 years later, the canonization of Sister Faustina Kowalska, the first saint of the new millennium, the “Apostle of Divine Mercy.”

There has never been, though, a canonization like that of March12, 1622, the 400th anniversary of which will be celebrated this Saturday.

Given the two Jesuit saints, Pope Francis is expected to attend the principal Jesuit celebration at their main church in Rome, Il Gesu, The Holy Name of Jesus.

Aside from St. Isidore, the other four were giants of the 16th century, champions of the Catholic Reformation.

Pope Gregory XV served in an important post-conciliar period, that of the Council of Trent. In January 1622, he instituted one of the most important Tridentine reforms, creating Propaganda Fide, the key Roman office to promote the evangelization of the vast mission territories that were being explored. What he did in January may not have been as important as what he did on March 12.

Recognizing new saints can be more important than creating new structures. Saints are God’s work, and canonizations are recognitions of where the finger of God has written his purposes in history.

Saints are God’s answer to crises in the Church. The 16th century was a time of great crisis. The Church in Western Europe was torn asunder. God’s answer was, in part, the saints of 1622.

Teresa of Avila was a master of the interior life and a formidable reformer. She transformed the soft and comfort-seeking religious life of her day, knowing that the external corruptions of the early 16th-century Church were a manifestation of a deep internal dissolution. Religious orders are the soul of the Church, the Church at prayer and worship, contemplating divine things and seeking communion with them.

Religious life in some parts of the Church today is thriving, but there is also plenty of dissolution, even decay. What is happening now has happened before; we need the same reforming spirit of Teresa again. Her saintly namesake, Teresa of Calcutta, is one such exemplar, having founded the fastest-growing religious order for women in our time, devoted with equal rigor to prayer and charity, to worship of the Body of Christ on the altar and service to the Body of Christ in the distressing disguise of the poor.

We call the Church our Mother, and while the prelates of the Church are male, the Church herself is feminine. That’s theologically true, but we also need to experience it. Where religious women have disappeared, it is hard to experience the maternity of the Church. Teresa led the great reform of women’s religious life in her time; she is needed to intercede for another reform in ours.

Francis and Ignatius remind us that disciples should pursue excellence for the greater glory of God — ad maiorem Dei gloriam, as the Jesuit motto puts it — at least as eagerly as they do for human approbation. Mediocrity is not usually sinful, but it can sap the evangelical energy of the Church. Lethargy and laziness can be more lethal to the Church’s life than licentious living, as the former slithers in more subtly.

The early Jesuits were a band of brothers committed to mission; Ignatius, Francis Xavier and Peter Faber were all college roommates together in Paris. Brothers in mission is an apt description for what it means to be a Christian. It’s how Pope Francis, the first Jesuit pope, defined the Church in Evangelii Gaudium — a communion of disciples united in mission.

For Ignatius and Francis, that mission was to go to the very ends of the Earth. Francis, the greatest missionary since Paul the Apostle, died off the shore of China, having previously evangelized in India and Japan.

Ignatius brought his military background — fighting for earthly glory — to the fight for souls. From Rome, not only he did send Francis Xavier to the Far East, but sons of St. Ignatius were the first missionaries in New France and throughout South America, as well as becoming martyrs in Protestant Europe.

Interest in St. Ignatius has had something of a revival recently, as many Catholics have learned his method of discernment through the Spiritual Exercises. This year the Jesuits are celebrating an “Ignatian Year,” beginning last May with the 500th anniversary of his conversion and including this year’s 400th of his marking of his canonization.

In Redemptoris Missio, his great charter for missionary activity, St. John Paul II taught that every Christian is to be a missionary and every place is a mission territory.

Philip Neri lived that reality. He originally wanted to head overseas like Francis Xavier, but his spiritual director told him, “Rome will be your Indies.” Rome was mission territory!

Rome in the 15th and 16th centuries was a spiritual mess. Worse than that, it was a scandal that cried out for reform. That reform would itself produce the pain of division in the Reformation.

St. Philip brought that needed reform to Rome itself in a thoroughly Catholic manner. He did so by preaching the Gospel, creatively and winsomely, and devoting himself to the forgiveness of sins in the sacrament of penance.

Philip was a genius at making friends and penitents, converting his friends and befriending his converts. He attracted rather than intimidated; he proposed rather than imposed. Of all the saints of 1622, he was the one we would most likely be happiest spending time with, as his joy was contagious — a contagion that would prove necessary in lifting the spiritual heaviness of Rome.

Unlike the four others canonized in 1622, he was not a saint of the Catholic Reformation. He lived some centuries earlier, dying in 1130. He is not to be confused with the more famous St. Isidore of Seville, though he was named after that saint.

He is the patron saint of Madrid and was a farmer who lived a holy married life. Indeed, his wife, Maria, is also a canonized saint.

St. Isidore teaches us about the ordinary path to holiness, even if his own was marked by miraculous events. He worked hard as a farmer and also devoted himself to prayer, realizing that a life of prayer was not only for priests and religious orders. He and Maria opened their home to others — indeed, some of the miracles of his life relate to an ability to feed more guests than they had food for!

St. Isidore spent his life doing ordinary things in an extraordinary way. Shorn of the miracles, his life was comprised of daily domestic life, the family version of the “Little Way” of the Little Flower. The other saints of 1622 lived life on the great stage of history; Isidore brought the great drama of history to his family, to his home and to his farmwork.

The saints are the reformers needed by the Ecclesia semper reformanda, the Church always being reformed. The Church’s response to the Protestant Reformation — doctrinally and in terms of ecclesial governance and practice — came at the Council of Trent (1545-1563). It was necessary and the work of the Holy Spirit.

But we might say that a definitive answer was given on March 12,1622, with the greatest canonization in history.

But for many of you budding web masters a shared hosting account is exactly what you need. Ebookmaker is the last ebook & article creator app you’ll ever need…. However, the concept of buying and renting has been made easier with the advent of the internet.