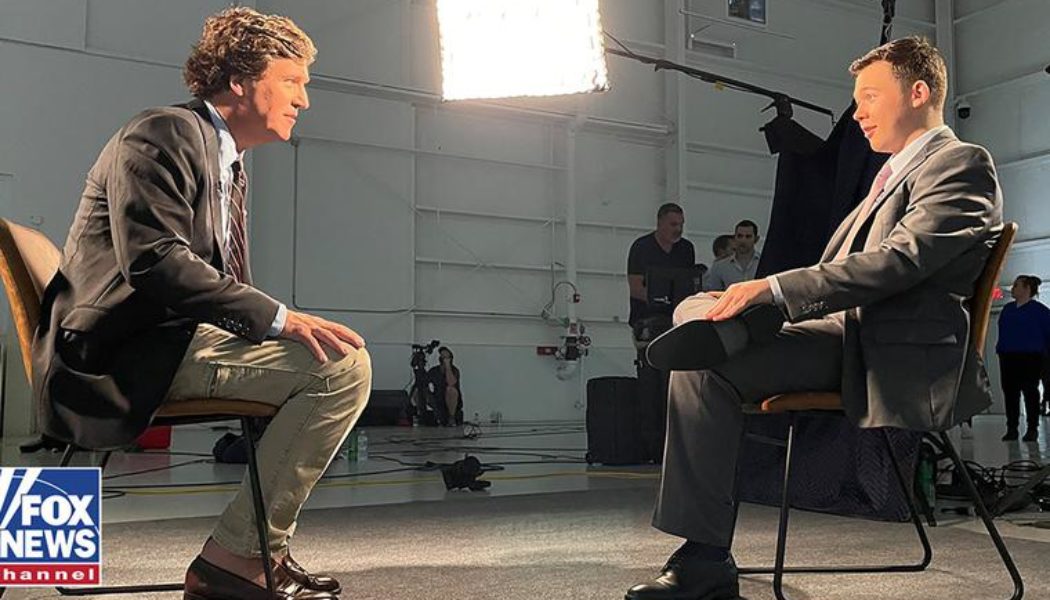 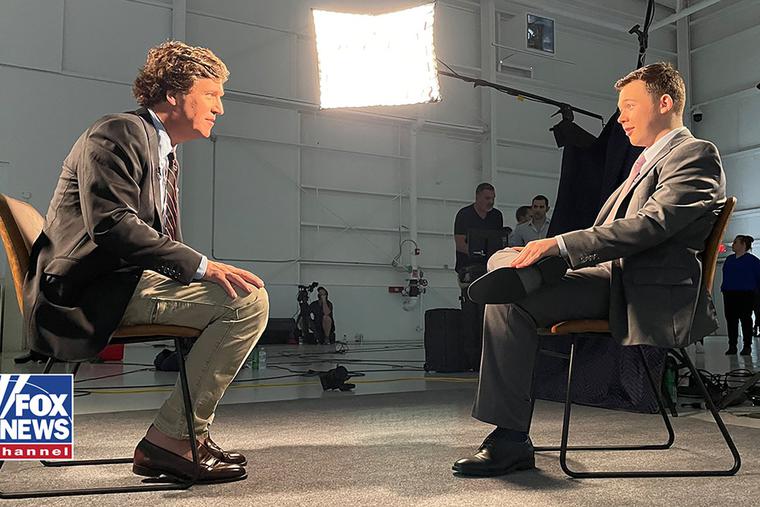 Fox News host Tucker Carlson introduced Kyle Rittenhouse on his show this Monday, three days after he was acquitted of all charges in his closely-watched, politically-polarizing criminal trial.

Five million viewers tuned in, eager to get a good look at the teenager whose criminal trial has gripped the nation.

The young man interviewed by Carlson didn’t resemble CNN’s cartoonish version of Rittenhouse as a racist “white vigilante” who preyed on others during the violent protests in Kenosha, Wisconsin, following the killing of Jacob Blake, a Black man, by a white policeman.

Nor did Rittenhouse fit the frightening “white supremacist” label that President Joe Biden employed when he featured the teenager’s image in a 2020 campaign video.

Rittenhouse was polite, and expressed little emotion. The Fox News host presented the now-18-year-old as “bright, honest, sincere, dutiful and hard-working — exactly the kind of person you’d want many more of in your country.”

Rittenhouse volunteered to protect a local business after local law enforcement wouldn’t (or couldn’t) do their job, said Carlson, reviewing the events of the day of the shooting. He described him as “a working-class kid who sincerely believes in America. … He tries his best to do the right thing at a time when almost no one else in the community is trying to do the right thing.”

And to the surprise, no doubt, of some of his most fervent opponents, Rittenhouse registered his support for the broad aims of Black Lives Matter activists, noting that prosecutorial overreach was even more likely to harm young men of color than a white working-class teenager like himself.

But the first step in the public rehabilitation of Rittenhouse will be viewed very differently by Americans who have come to believe in his innocence.

The lengthy online television interview gave Rittenhouse time to tell his version of events as he relived the hours leading up to his fateful decision to bring a weapon to the chaotic streets of Kenosha. And since many of Rittenhouse’s supporters had already concluded that Wisconsin laws governing self-defense required his acquittal, his on-camera presence, confirming his release from incarceration, was cause to celebrate the proper functioning of the rule of law.

Likewise, Rittenhouse’s appearance provided a measure of vindication for those who believed the media had unfairly rushed to demonize the teenager. Indeed, the skewed  coverage of the events leading up to the shooting at the Kenosha protests became its own news story.

In a Nov. 22 opinion column for the New York Times, Nancy Rommelmann, a journalist who reported on the 2020 protests in Portland, Oregon, offered a sharp critique of mainstream media coverage:

Along with many Americans, I watched coverage of the Kenosha riots on television. I experienced the cognitive dissonance others did, seeing the live CNN shot of a reporter standing before a conflagration while the chyron read, ‘Fiery but mostly peaceful protests after police shooting.’ This mismatch mirrored my experience with how much of the news from Portland was being reported, which often sought to present the protesters as only on the defensive, rarely the instigators, as if pointing out any bad actors ran the risk of tarring the entire protest movement.

But if Rittenhouse’s supporters may now savor his acquittal as the triumph of facts over manufactured political narratives, it is quite another matter to endorse his response to the breakdown of law and order in Kenosha, as some have done.

“Any able-bodied man over 16 years old had a moral obligation to defend Kenosha against vandals, looters, and arsonists attacking while police stood down,” argued Evita Duffy in a column on the Federalist website that called out the failure of state officials to stem the violence and protect property.

In contrast, David French pushed back against efforts by “the Trumpist right” to create “a folk hero out of Rittenhouse,” in a commentary for The Atlantic.

Writing before Rittenhouse’s acquittal, French explained that while the defendant’s actions may be protected under Wisconsin law upholding the right to self-defense, that did not erase the truth that he engaged “dangerous and provocative conduct.”

When Kyle Rittenhouse walked the streets of Kenosha in the midst of urban unrest following the police shooting of Jacob Blake holding a rifle in the ‘patrol carry’ or ‘low ready”’ position, similar to the positions used by soldiers walking in towns and villages in war zones, without any meaningful training, he was engaged in remarkably dangerous and provocative conduct. But that dangerous and provocative conduct did not eliminate his right of self-defense, and that self-defense claim is the key issue of his trial, not the wisdom of his vigilante presence.

An Army veteran, former prosecutor and self-proclaimed “supporter of gun rights,” French emphasized the stark difference “between quiet concealed carry and vigilante open carry, including in ham-handed and amateurish attempts to accomplish one of the most difficult tasks in all of policing — imposing order in the face of civil unrest. And there is a dramatic difference between the use of weapons as a last resort, when your life or the lives of others are in immediate danger, and the open carrying of weapons as an intimidation tactic or as an intentionally disconcerting display of political identity and defiance.”

Just as the Left’s tolerance and occasional justification in the wake of George Floyd’s death in police custody appeared to have emboldened such behavior, so French warned that the valorization of Rittenhouse’s actions could encourage other “foolish” young men to follow his path — despite the fact that he “didn’t impose order. He didn’t stop a riot. He left a trail of bodies on the ground.”

Let’s pause to consider what the Church has to say about the right to self-defense.

The Catechism of the Catholic Church (2263-2264) upholds the right to protect one’s own life or the lives of others, under specific conditions:

The legitimate defense of persons and societies is not an exception to the prohibition against the murder of the innocent that constitutes intentional killing. ‘The act of self-defense can have a double effect: the preservation of one’s own life; and the killing of the aggressor. … The one is intended, the other is not.’

Love toward oneself remains a fundamental principle of morality. Therefore it is legitimate to insist on respect for one’s own right to life. Someone who defends his life is not guilty of murder even if he is forced to deal his aggressor a lethal blow.

The Catechism (2265) distinguishes between individual self-defense and the “legitimate defense” of others — primarily, but not always, by civil authorities:

Legitimate defense can be not only a right but a grave duty for one who is responsible for the lives of others. The defense of the common good requires that an unjust aggressor be rendered unable to cause harm. For this reason, those who legitimately hold authority also have the right to use arms to repel aggressors against the civil community entrusted to their responsibility.

Yet the Catechism (1806) also calls for the inculcation of virtue, including prudence, which “disposes practical reason to discern our true good in every circumstance and to choose the right means of achieving it.”

A case can be made that the proper exercise of prudence should have discouraged Rittenhouse, a teenager, from openly carrying a weapon during a violent protest. So what might be a better, more defensible example of citizens responsibly taking up arms to protect property when civil authority fails to meet its duty to protect?

In a recent National Review column responding to the Rittenhouse case, Nate Hochman looked back to 1992, when armed Korean American store owners defended their businesses during the Rodney King riots in Los Angeles.

“For the five days of anarchy and violence in South Central L.A. — which killed nearly 60 people and injured thousands more — men in Koreatown kept watch on the roofs of their storefronts, armed with semiautomatic rifles to fend off would-be looters,” said Hochman.

“It’s easy to understand why the armed Koreatown shop owners were heroes. They didn’t go looking for trouble; the trouble came to them. When it did, they were ready to do what it took to defend their community.”

But something is wrong when shopkeepers have to become sentries. We don’t need the blurring of boundaries between armed militias and legitimate civil authorities. We need to insist that the latter embrace a central duty of government: the defense of the community entrusted to their responsibility.

Rittenhouse is surely a more complicated case, and that means we can celebrate his acquittal without encouraging others to follow his lead. As a mother of two sons, I pray he will have the sense, the prudence, not to join up with political activists who may be as unconcerned with the real Rittenhouse as his progressive foes clearly have been.

During the Fox News interview, Tucker Carlson announced that a documentary about Rittenhouse would be out in December, using material filmed by a crew embedded with Rittenhouse during the trial. Thus far, it is unclear how that film will be promoted and used by Fox and its supporters on the Right. But it’s apparent that the cable network has leveraged Rittenhouse’s story for its own purposes, and they won’t be the only ones.

During his interview, Rittenhouse told Carlson that he had enrolled in college, though he was not certain whether he wanted to be a nurse or a lawyer. To the prudent observer, either path would be preferable to the one that some commentators and activists have cut out for him.