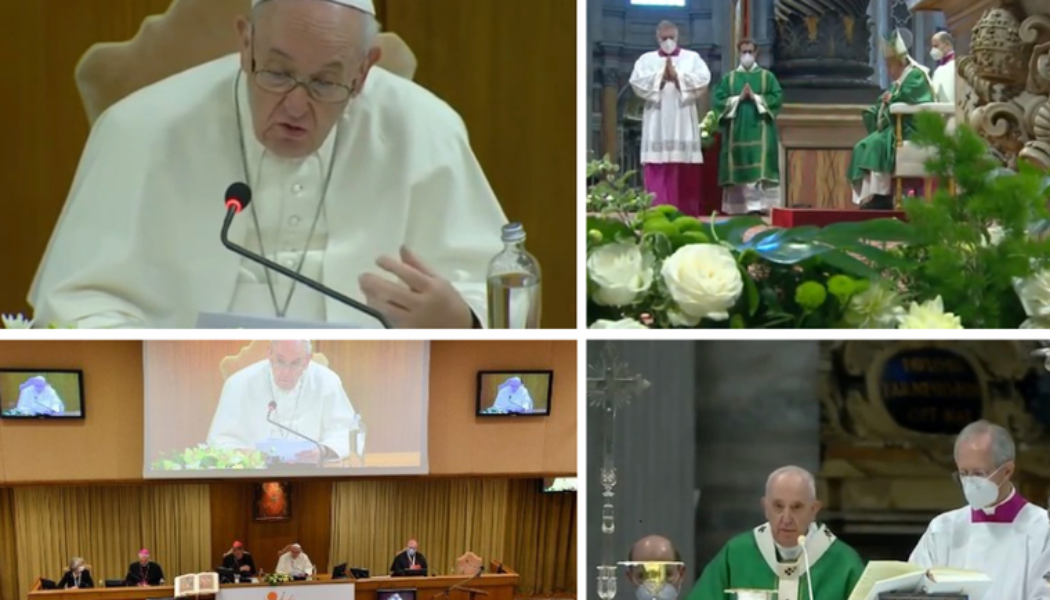 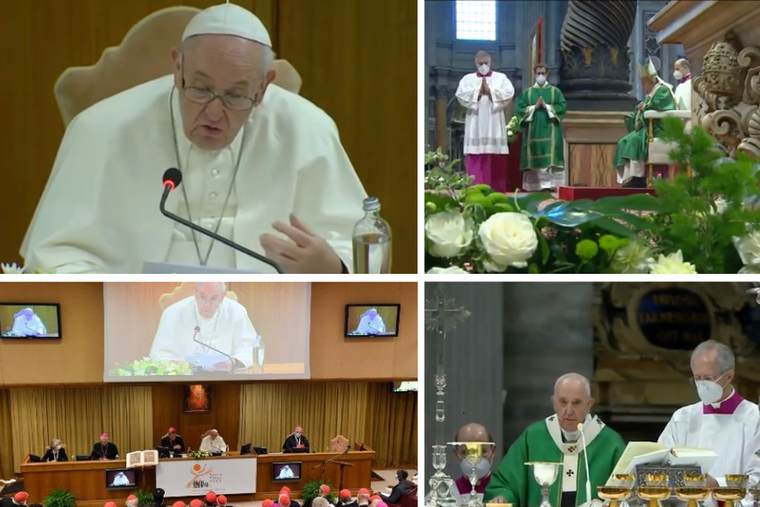 Pope Francis used a quartet of trios to launch the first phase of the synod on synodality, local meetings preparing for the regional, national, continental and hemispheric meetings that will lead up to the synod of bishops in October 2023.

On Saturday, in an address to the launch meeting for the elongated synod process, he spoke of three themes (communion, mission and participation), three risks (formalism, intellectualism, complacency) and three opportunities (structural change, listening, closeness).

In his Sunday homily, he added a fourth triplex formulation — encounter, listen and discern — to inaugurate what papal biographer Austen Ivereigh describes as the “biggest popular consultation in human history and a threshold moment for the global Catholic Church.”

The mother of all meetings “has so far registered as no more than a blip on the Catholic radar,” wrote Ivereigh himself last month. “So far the disengagement has been almost total.”

Over two years there is plenty of time to develop the 12 introductory papal ideas of the launch events, complementing the 10 thematic topics the Vatican issued last month. The planetary process begun in Rome is intended to unfold at the local level between now and next April. With every diocese asked to produce a 10-page report on the consultations, there ought to be, if everything goes according to plan, massive volumes running to tens of thousands of pages generated for the national, continental and hemispheric phases of the planetary process. All this will be kneaded into shape for the synod in 2023, when the bishops finally meet.

Ivereigh is right. Never before has anyone thought to conduct a planetary consultation requiring hundreds of thousands of person-hours of meetings. Whether it will catch on remains to be seen. Nothing in the past days seems to indicate that the “total disengagement” Ivereigh laments has changed. There is a distinct possibility that the entire process will not get off the ground, and Rome will simply impose its priorities on the frustrated consultation.

The launch suggested problems in the first moments of the planetary process: participation, process and previous controversies.

No Preparation for Participation

Quoting St. John Paul II at the 1985 extraordinary synod on the 20th anniversary of Vatican II, Pope Francis said on Saturday that if synods “are to be fruitful, they must be well prepared: ‘It is necessary that the local Churches work at their preparation with the participation of all.’”

Yet the planetary process was announced less than six months ago; no one even knew that it was coming. Local bishops are dealing with emergence from the pandemic as well as getting ready to implement a complete overhaul of the penal section of the Code of Canon Law in December. Some may have even devoted pastoral energy to the Vatican’s ongoing Year of Amoris Laetitia.

The necessary preparation for effective participation has simply not been done because there was no time for it to be done. The likely catch-up maneuver will be for existing ecclesial bureaucracies to generate the necessary paper, as they are already equipped to do so. Consultation with the entire “holy People of God” is likely to end up as a consultation with lay ecclesial bureaucrats in wealthy countries, augmented by various official councils at the parochial and diocesan level.

Process Innovations: A Synod Without Bishops?

Cardinal Mario Grech, secretary general of the synod of bishops — in effect, the chief synod manager — raised a wholly novel question about process. It was the most newsworthy part of the synod process launch.

The news was that the synod on synodality may turn out not to be a synod at all, at least insofar as a synod, in the Church of both East and West, has always meant a meeting where bishops take decisions. In the West, the synods pass resolutions to advise the pope; in the East the synods take governance decisions.

Cardinal Grech, in what presumably was a trial balloon for changing the rules down the road, suggested that the 2023 synod may not involve the synod members, namely the bishops, even voting on the synod’s final document. Cardinal Grech permitted himself to imagine alternatives.

“Is it so impossible to imagine, for example, to resort to voting on the final document and its individual items only when consensus is not certain?” he asked. “Is it not enough to foresee reasoned objections to the text, perhaps signed by a suitable number of members of the assembly, resolved with an additional discussion, and have recourse to the vote as a last resort?”

So a “consensus” could be declared, with no need to test it in a vote that requires two-thirds support to pass. There is precedent for massaging the rules if needed. In 2014, those items that did not garner two-thirds were included anyway in the final report, at the direction of Pope Francis.

Who would decide whether a “consensus” has already been achieved, whether a vote was necessary as “a last resort” or whether to anoint a particular position as having been “resolved with an additional discussion”? It would likely be Cardinal Grech and the managers of the synod secretariat.

While his imagination was stoked, Cardinal Grech also suggested that the synod on synodality, after two years absorbed in meetings, might kick it all off again, by not submitting a final document to the Holy Father at all, but sending it back out to thousands of dioceses around the world for another chewing of the cud.

“In this case, the final document would reach the Bishop of Rome … already accompanied by the consensus of all the Churches,” Cardinal Grech said. And who would collate, summarize and synthesize what a second planetary process had decided? Might it be Cardinal Grech and the synod managers?

Also remarkable about the synod launch was what was not said, especially in light of previous controversies.

A classic text on consultation in the Church is from 1859, St. John Henry Newman’s “On Consulting the Faithful in Matters of Doctrine.” No mention whatsoever was made of Newman’s text, neither by Pope Francis nor Cardinal Grech, all the more surprising given their addresses were given on Newman’s feast day, Oct. 9.

But it was likely not negligence that explained the omission. While St. John Newman argued that the deposit of the faith was entrusted to the entirety of the Church, in matters of doctrine and morals it was the magisterium that had the responsibility to teach. The consensus of the faithful was an important witness to that teaching.

St. John’s framework put certain limits on the consultative step. Mentioning him would bring to mind the more recent controversy of the German “synodal path,” which delivered its own Oktoberfest surprise just days before the Roman launch.

Despite a clear indication from the Congregation for the Doctrine of the Faith to the contrary, the Germans kicked off their synodal path by voting in favor of blessings for same-sex unions and reversals of other settled teaching on sexual morality. Those voting in favor would have included several dozen German bishops. It was likely the plan in Germany to leave such provocative rebellions for later, so the vote was scuttled on procedural grounds and rescheduled to a later date.

What is happening in Germany makes a mockery of the planetary process before it even starts. Exactly what the Holy Father says the synod on synodality is not supposed to be — a secular parliament where settled doctrine is voted upon — is already happening in the only country where preparation has been underway for years.

The silence on Germany at the synod launch is because the entire process will be thrown into chaos if the German question is not settled, and settled soon. Otherwise, what is to prevent other places in the planetary process from following Germany’s lead?