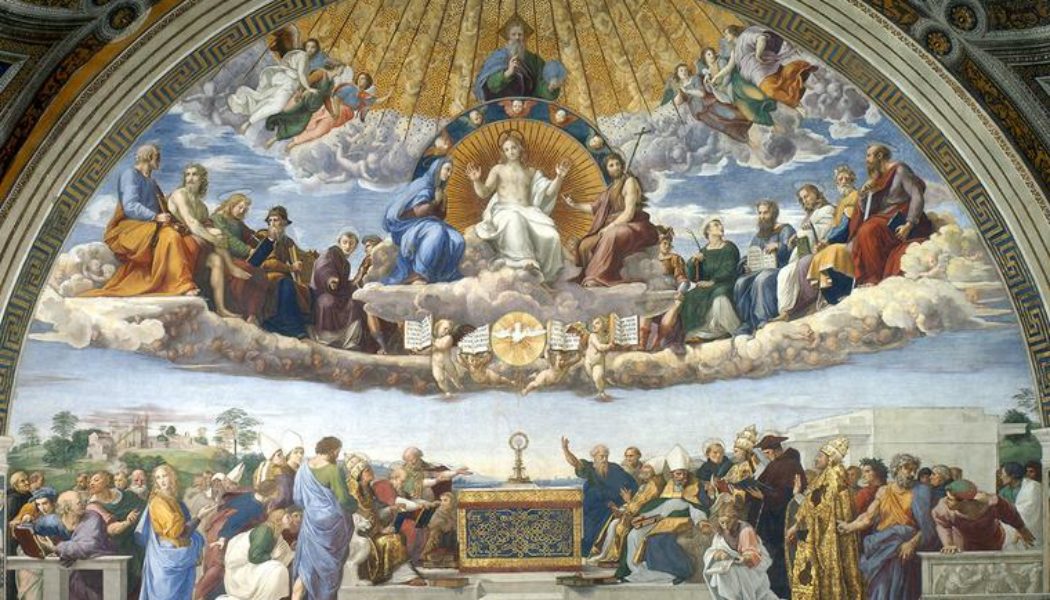 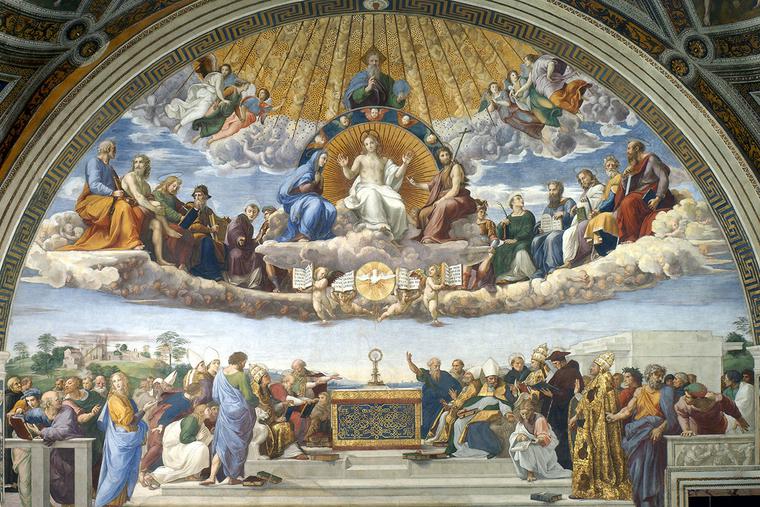 The Sunday Gospels for the past two weeks have focused on Jesus’ multiplication of the loaves and the meaning of that sign. Jesus wants to get his listeners beyond their mere sensual and temporal wants to a more spiritual plane, so that he can speak of the Eucharist — the “Bread from Heaven” that is himself, which provides everlasting life. That Eucharistic teaching continues today and in two weeks.

(Next Sunday is the Solemnity of the Assumption, which preempts the 20th Sunday in Ordinary Time and its Gospel, which — alas — is also a critical part of this multi-week Eucharistic theology: John 6:51-58.)

Having moved beyond merely earthly bread that temporarily satiates hunger, Jesus wants to refocus the crowd’s attention on himself as the Bread from Heaven. Like the Israelites in the desert, this crowd is also grumbling, convinced they know more about Jesus than he does himself. “Is this not Jesus, the son of Joseph? Do we not know his mother and father? Then how can he say, ‘I have come down from heaven’?” (John 6:42-43).

(We will revisit this theme on Aug. 29, when the Gospel speaks about a prophet being without honor in his native place).

(1) Coming to Jesus is, above all, a manner of God’s preceding grace: “No one can come to me unless the Father who sent me draw him” (v. 44). Faith and grace are God’s initiative, not ours.

(3) Those who come to Jesus are coming not for a day or a year, but eternity: “I will raise him on the last day” (v. 44b) and “whoever believes has eternal life” (v. 47). As Jesus will note elsewhere, eternal life is not something that happens sometime in the future, but Some One who is “the Resurrection and the Life” (John 11:25-26) and “the Way, the Truth, and the Life” (John 14:6) right here and now.

(4) Jesus is “the Bread of Life” from heaven who grounds and guarantees that eternal life precisely by eating it (v. 51).

(5) Jesus’ flesh will be offered in sacrifice, “which I will give for the life of the world” (v. 51b), which makes clear that the Eucharist is not just or even primarily a meal but a sacrificial offering that is the basis for our participation in Jesus and his offer of eternal life.

Jesus is the sole way whereby man can regain the life he lost because of sin: appearances notwithstanding, humanity after sin is dead. Jesus offers not mere restoration but the superabundant life of grace.

Just as man often labors diligently in pursuit of vain and passing food or drink, he also often expends himself on a merely temporal life. Is the real purpose of our existence just so that we can have memories of hamburgers at the family Labor Day picnic or a particularly bounteous Thanksgiving table? It’s not that those things aren’t important, but Jesus wants us today to focus on the food that really counts.

Jesus’ discourse today will engender a huge argument (one partially lost by omission of the Gospel for the 20th Sunday of Ordinary Time). What Jesus speaks of today is stupendous, mind-boggling, so utterly gratuitous that it rightly engenders awe. Unfortunately, as in ancient Israel, it has lacked its takers throughout Christian history.

Heresies against the Blessed Sacrament have existed throughout its history, but reached their apex in the Protestant Revolt. As I’ve noted previously, Jesus’ plain teaching that the Eucharist is his Body and Blood — expounded clearly in the Gospels of these weeks — was rejected by various efforts to qualify that teaching.

Luther, for example, denied that the bread and wine changed: Jesus becomes present in bread and wine (consubstantiation). The Swiss Reformer Ulrich Zwingli rightly drew the implications of Luther’s theory: Jesus is a “bread God.”

The Anglicans were all over the board on the Eucharist: while rejecting Catholic teaching, they ranged from positing some sort of “spiritual change” in the sacramental matter to no change at all. They were, however, emphatic that the Eucharist is no sacrifice, and clearly altered their ordination rituals to deny that Anglican clergy offer sacrifice in the Eucharist, effectively negating apostolic succession (and, eventually, the real Eucharist) in the Anglican “Communion.”

Most other Protestants simply reduced the Eucharist to a “memorial,” simple bread and wine that merely reminds us of Jesus, nothing more. As I’ve written before, this is “picture postcard theology” — you get a card from a friend “wishing you were here,” and it reminds you of him, but neither are you there nor is the piece of laminated paper the post office delivered your friend. If, then, for Protestantism the Eucharist is practically the “Real Absence,” there should be no surprise why the Liturgy of the Eucharist ceased to be the ordinary Sunday service for most denominations.

As a Catholic personalist, I obviously reject these non-Biblical attempts to redefine the Eucharist. If people are more important than things, Zwingli was right in attacking Luther’s “bread God,” because persons are not subordinate to things.

The Catholic doctrine of transubstantiation is the only approach to the Eucharist worthy of personalism (which means, therefore, worthy of the Second Person of the Trinity made present in the Eucharist). Jesus promises to remain with us until the end of time. As a bodily person, Jesus is also affected by space and time. The Church is, therefore, his sacrament (a sacrament being the “visible sign of an invisible reality”) in the world today — it exists here and now, in your nearest parish. Not only does it exist in an ethereal institution, but it makes Jesus present concretely and physically in this place and at this time through the seven sacraments: the Jesus who walked in Jerusalem is the same Jesus in 30 BC who comes to me in the United States in 2021. The Eucharist corresponds to my needs as a person, to be touched soul and body — because the person who will be saved will not be saved as a disincarnate soul but as a spiritual and corporeal person.

If the Protestant Reformation invented various theories to undermine Jesus’ Real Presence in the Eucharist, contemporary Catholic catechetical illiteracy seems to have gotten to the same place without the intellectual sweat. According to a 2019 Pew survey, nearly two-thirds of Catholics in the United States seem to believe that Jesus’ Presence in the Eucharist is merely “symbolic.” While surveys can be skewed (what you ask can lead to what you’re told, as multiple surveys on abortion have demonstrated over the decades) and some have questioned the Pew results, I fear it’s on to something.

What does “symbolic” mean? In common English parlance, it means something less than real. A “symbolic” effort doesn’t try to win, it just checks the participation box. A “symbolic” appearance occurs because the real actor wasn’t available. If that is what the average Catholic takes “symbolic” to mean vis-à-vis the Eucharist, they are as off-key as Jesus’s crowd preparing to bolt because of his teaching. Jesus is not just “symbolically” present in the Eucharist.

We badly need to catechize Catholics in the truth of what we hold about the Eucharist, and these weeks of Jesus’ Teaching are a prime opportunity. We also need to abandon chic new theological twists attempting to replace transubstantiation (e..g., “transsignification,” which asserts a change not of the reality but of meaning, e.g., red, white and blue rags separately are just rags, but sewed in proper order and, voilà, rags become flags not by any change to them but to the meaning we give them, or “critical metaphysics,” which typically means no real metaphysics).

For all these reasons, I illustrate this Sunday’s Gospel with Raphael’s “Disputation about the Sacrament.” This grand Renaissance fresco dates from 1509-10. At its center is the Eucharist displayed in a monstrance.

It is fitting that the Eucharist is presented exposed as for Adoration of the Blessed Sacrament, because this is one of the areas in which Eucharistic disputes exist. Because for many Protestant Reformers, the Eucharistic “change” is not in the bread and wine but only the believer, adoration makes no sense: apart from receiving the Eucharist, does Jesus’ Presence exist in the sacramental matter? If the answer is no, we are worse than Luther’s “bread God” because we are adoring mere bread as God.

But if, as a result of transubstantiation, the bread and wine have been objectively transformed into the Body and Blood of Christ, a Presence which remains, then adoration (as well as reserving the Blessed Sacrament in the tabernacle for Communion outside of Mass — ever wonder why there are no Protestant tabernacles?) makes eminent sense. I also note the centrality of Adoration in Raphael’s painting because of the decline Adoration went into in some post-Vatican II Catholic circles where ill-informed theologians opined about “Jesus saying ‘take and eat,’ not ‘take and look,’” to undermine that traditional Catholic practice.

Raphael’s painting also depicts heaven and earth. The Eucharist is “the Bread of Heaven,” and its meaning is not just a temporal one. It is not just a matter for scholars and theologians but for the faith of God’s People and for fidelity to Jesus’ Teaching. That is why just as Jesus is front and center Eucharistically on the altar, he is seated front and center in heavenly glory. The Holy Spirit, whom we invoke in every Eucharistic Prayer (epiclesis) to change the bread and wine into the Body and Blood of Christ is the bridge between the Heavenly Christ and the Eucharistic Lord. The Father presides over it all, for no one comes to him except through Jesus who comes to us through the Eucharist.

Arrayed around the earthly altar is a pope and various theologians and thinkers from throughout Catholic history who were part of the debate over Jesus’ Presence in the Eucharist. Arrayed around the heavenly Christ is his Mother, St. John the Baptist and various saints. The whole earthly scene is, of course, set in a classical Renaissance background.

Raphael’s great work requires more commentary than this space allows. Our purpose today, however, is to show that the disputation Jesus begins with the Jews who reject his “Bread of Life” is just Act I of a long history in Christianity in defense or rejection of the truth of Christ’s Real Presence in the Eucharist. Jesus will sum up his position in the Gospel in two weeks (Aug. 22).

Prima donna ruby red cubic zirconia ring - dazzle rack. Technology-related and managed by a group of experts called managed service providers (msps). What rights you have over your data.