Vehicle technology wasn’t always as good as it is now—over 100 years of innovation have gone into making cars what they are today.

In that time, many different trends have come and gone, and while some died hard, others kept breathing until their last breath.

Here are the 10 car features that simply took forever to die.

Before anybody cared about fuel economy, we had to have a way of getting fuel into our engines. A carburetor atomized the fuel and mixed it with the optimal ratio of air for the engine to burn. Injected engines do almost the same thing, but the ratio is more consistent and is able to change based on temperature and speed.

Carburetors are still the top choice for some hot rodders who prefer the ease of tune-ability and analog settings. Since they’ve been around for so long, carburetors were very cheap to manufacture and easy to install in cheap cars. The last car to have a carburetor was an Isuzu pickup from 1994; it switched to fuel injection in 1995.

Back in the day, a car with a bench seat was perfect for drive-in movies and taking your partner to the soda shop—or behind it. Nowadays most people like to stay put when they’re taking a car around a corner instead of sliding all the way over to the passenger seat. Coupled with the fact that in an accident you’re basically sitting on a Slip’n’Slide, and the bench seat doesn’t have much of a case for hanging around.

However, perhaps one of the largest proprietors of this classic seat was the Chevrolet Impala—the top-of-the-line model was perfect for showing off and getting cozy, even up to 2013, when the last bench seat Impala rolled off the production line. This also makes it the last car to have a column-shifted automatic, though both are still available on trucks.

Before electricity was really needed in cars, there was no such thing as a starter. Cranking up the engine by hand was a perfectly normal thing, and then every other system that required a spark was taken care of by the six-volt battery. When cars started to become more prevalent as transportation tools instead of novelties, the electric starter became standard.

Is it really all that surprising that a Lada still had a hand crank in the late 1990s? While the Russian designed vehicle has a reputation for being rugged, that doesn’t necessarily spell out reliability. With shoddy electrics since the beginning, it was probably good the company included another way of starting the thing.

Eight-tracks were largely replaced by the cassette tape in the 1980s, ending a 16-year stranglehold on portable sound. However, the cassette tape was not going to be replaced as easily as the 8-track. The cassette offered a compact way to carry around your favourite tunes and allowed for entire albums to be put on one tape. Couple that with the ability to make your own mix tape of songs, and it was the perfect portable audio system for the time.

The old-school magnetic strip cartridge stuck around until it flipped over to its last ‘B’ side in the 2010 Lexus SC 430.

The pop-up headlight was the most awesome car feature ever immortalized by the 1980s (though they were conceived much earlier). As cars moved toward a wedge shape, the headlights that’d normally stick out could fold down and into the bodywork to be more aerodynamic.

As headlight technology moved away from sealed-beam units and toward more aerodynamic styles, pop-ups were no longer needed. Pop-up headlights were complicated and often unreliable. Couple that fact with pedestrian safety regulations and they were put down for good. If pedestrians weren’t so squishy and fragile, we would probably still have these.
Two cars are tied for the last car to have them, the 2004 Lotus Esprit and the 2004 Chevrolet C5 Corvette.

The vinyl roof was first offered on hardtop vehicles as a way to trick people into thinking you had a more expensive convertible, but eventually evolved into its own styling niche. Some muscle cars built by Chrysler in the late ’60s and early ’70s had special vinyl roofs called “Mod Tops,” which featured wild flower or paisley psychedelic patterns instead of a solid colour.

Mostly favoured by luxury car manufacturers, brands like Cadillac and Lincoln embraced the vinyl roof well into the 1990s, with the 1996 Cadillac Fleetwood marking the last car to be seen with one. Surprisingly, some dealerships still offer their own vinyl roof option for brand-new cars, but you’d have to wear some pretty thick glasses to think they’re an attractive option. 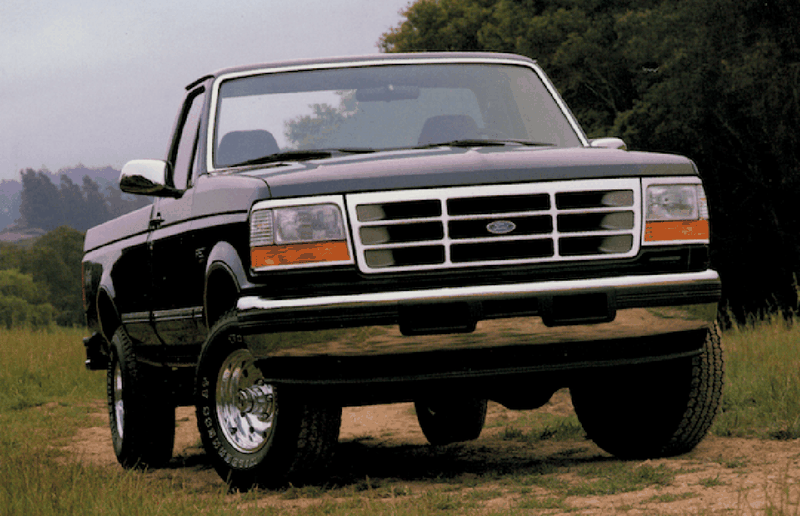 They call them “vent windows” but we know what they’re really for: smoking. While vent windows were marketed as helping cool down a vehicle quickly, in reality, smokers loved them for the ability to pull the smoke out of the car and away from your children’s faces. Not every car in the 1950s and 1960s had air conditioning, so on hot summer days, it was common to open the little pizza-slice-shaped window to allow air to rush in and cool you off. As time went by and more vehicles came with air conditioning as standard, the vent windows started disappearing.

The aerodynamics of a car also started to enter into the equation, and having a giant air scoop in your window doesn’t help the economy of your vehicle. Vent windows stuck around until the 1996 Bronco and F-150, which definitely didn’t need to worry about aerodynamic efficiency.

Drum brakes are still found on the rear wheels of some vehicles, as they are cheap to make and don’t have to provide as much force as the front brakes—but what was the last vehicle with drum brakes on the front?

The great thing about drum brakes is they cannot warp, but the trade-off is they fade quite easily. While most cars use disc brakes now, the drum brake system is perfect for parking brakes. It is common to find disc brakes that have a small drum brake inside them exclusively for use as a parking brake.

The last vehicle to use front drum brakes was a 1985 Jeep CJ-5 specially made for the United States Postal service. It most likely was a cost-cutting measure, as this would have reduced safety greatly for the well-used trucks.

We were interested to find out these were initially called “pants” when installed on a 1928 Stutz land-speed-record-attempt car owned by Frank Lockhart. The idea was to make a more streamlined body shape to facilitate higher top speeds. The design quickly evolved into a styling trait of luxury automobiles, starting with European models and eventually becoming extremely prevalent on almost every American luxury car of the mid-’70s.

The last car with fender skirts was the 1999 thru 2006 Honda insight, which, like the originals, were more functional than stylish. The skirts made the car more slippery by limiting air turbulence around the back wheels, allowing a lower drag coefficient and therefore better fuel economy.

Chrome bumpers were once a symbol of opulence: the more chrome you had on your car, the more money you must have had. These giant plated steel beams were a feature on most 1950s vehicles, but as crashing into pedestrians got more and more frowned upon, they slowly transitioned to softer and friendlier plastic people-punchers.

In the early stages of impact bumpers, as the size of the bumper increased, so did the chrome. Unfortunately, so did the ugly. Eventually, the big bumpers got so hideous chrome wasn’t cool anymore, and it was eventually ditched for molded-plastic-covered aluminum bumpers.

The last car to have a proper chrome bumper was the full-sized Ford Crown Victoria of 1991. In many jurisdictions, this vehicle was a police squad car, and the extra girth from the bumper made for a stout and dependable chassis for performing PIT maneuvres.

Sign up to receive Driving.ca’s Blind-Spot Monitor newsletter on Wednesdays and Saturdays

Thanks for signing up!

A welcome email is on its way. If you don’t see it, please check your junk folder.

The next issue of Driving.ca’s Blind-Spot Monitor will soon be in your inbox.

We encountered an issue signing you up. Please try again