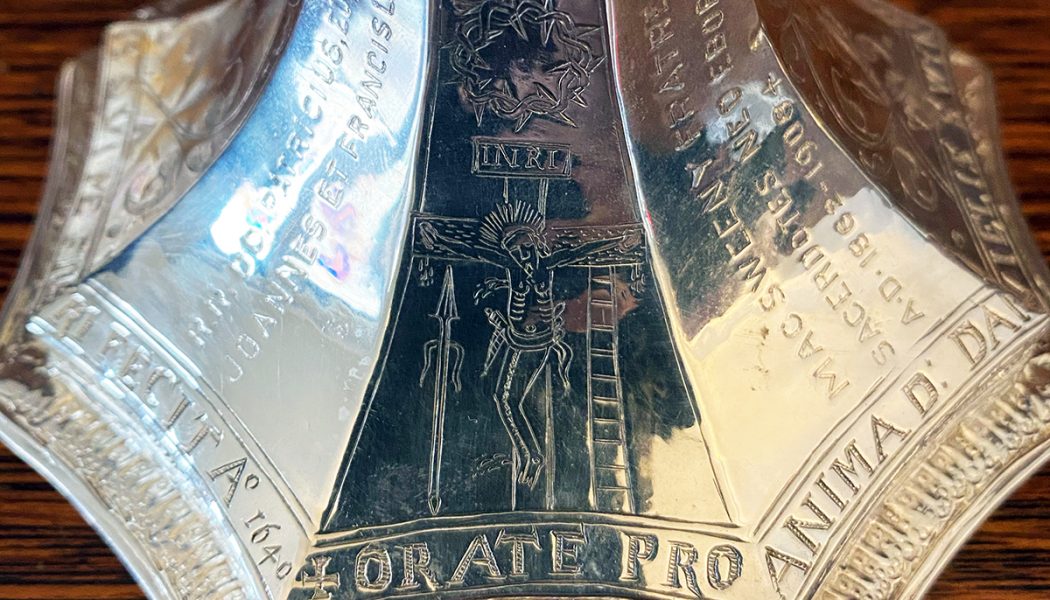 Every St. Patrick’s Day brings back the happy memories of when I was a seminarian of the Archdiocese of New York. In celebration of our local church’s patronal feast we would always be given the day off from class so we could travel to Manhattan to serve the cardinal’s Mass at St. Patrick’s Cathedral before watching the famous parade up 5th Avenue.

Each year we would bring with us our seminary’s prized possession for the cardinal to use as he celebrated Mass. It was the famed “MacSwiney Chalice.”

This is not a chalice of pure gold with diamonds and jewels but something far more simple, yet remarkably special. It was made in 1640 and used in the days of the Penal Laws in Ireland when the Catholic faith was outlawed and priests were hunted men.

New York’s celebration of St. Patrick’s Day is the largest in the world. The city’s mayor and Taoiseach (prime minister) of Ireland are always present among other prominent figures and celebrities. Thousands line the parade route. The media is out in full force.

Amid such fanfare, however, the legacy of the day’s namesake is all too often overlooked. The celebrations that turn into drunken revelry certainly become a direct contradiction of it.

The use of the MacSwiney Chalice at the heart of it all is an especially important symbol, then, to help remind all present of the centrality of the Catholic Faith to Irish heritage. Patrick brought the Gospel of Christ to the Irish people and until these secular modern times, the Catholic Faith has always been their most prized possession, even in the midst of the fiercest persecutions.

The MacSwiney Chalice comes from the most heroic period in the history of the Irish Church. Since the reign of King Henry VIII, Catholic Ireland stood in the shadows of a great Protestant power in neighboring Britain. The Irish were dehumanized as their rights, land and food were all taken from them. The one thing the British were never able take from them, however, was their cherished Catholic Faith — though they certainly did try. Plenty of churches, schools and seminaries were destroyed, but not the Faith. The Masses where the MacSwiney Chalice was used were offered in hidden away places like homes, barns and fields. The priests and the people who worshipped God with this sacred vessel were willing to risk their lives for the graces of the Holy Eucharist. The chalice is designed to be taken apart into three pieces for easy concealment so it could be hidden in pockets or a saddlebag; a fitting symbol of the persevering faith of the Irish people in those days which is St. Patrick’s greatest legacy.

The worst of the persecutions began under Oliver Cromwell who rose to power as the eventual victor of an English civil war known as the Wars of the Three Kingdoms.

Cromwell quickly turned his attention to the rebellious Irish Confederates who took up arms seeking an end to anti-Catholic discrimination, the restoration of land confiscated by English settlers in the different planation pushes, and greater Irish self-governance. Leading the armies of the Parliament of England, Cromwell invaded Ireland in 1649. He occupied the whole country within three years and began enacting harsh penal laws against the Irish Catholics. Thousands were put to death.

Cromwell declared that the Catholics of Ireland could either go “to Hell or Connacht.” In his Act of Settlement in 1652, he spelled out exactly what he meant. Unless one could prove “constant good affection” for the English Parliament, they couldn’t keep their estates. Almost all Catholic landowners were forced off their land and were moved west of the River Shannon to the province of Connacht. Catholics almost disappeared as a property-owning class in Ireland east of the Shannon.

The practice of the Catholic Faith was outlawed. Upon taking control Cromwell gave priests 20 days to get out of Ireland. Many dared to stay, putting their lives in peril so they could administer the sacraments to the faithful. These “underground” priests would visit the sick by night and celebrate Mass just before dawn in hiding places such as upon “Mass rocks” out in remote fields with scouts on lookout for soldiers. If the priest were ever caught, and hundreds were, he would be tortured and executed. One priest described the conditions in 1656:

“We live, for the most part, in the mountains and forests. … Catholics flock to us, whom we refresh by the Word of God and consolation of the sacraments. … In spite of all the precautions used to exercise our evangelical ministry in secret, the Cromwelians often discover it; and then the wild beast was never hunted with more fury, nor tracked with more pertinacity, through the mountains, woods and bogs, than the priest!”

With Cromwell’s death in 1658 and the restoration of the monarchy under Charles II, there was a short-lived period of relief for the beleaguered Catholics of Ireland that came to an abrupt end when new Penal Laws were enacted in 1695 by the entirely Protestant Irish Parliament. Further Penal Laws would be passed in the 18th century all aimed at stamping out the Catholic Faith so the Irish could be more loyal and trustworthy subjects of the Crown.

There were fines and imprisonment for participation in Catholic worship and severe penalties, which included death for priests. Catholics were barred from voting, holding public office, owning land and teaching their faith to their children. By 1778 Catholics would own a meager 5% of Irish land.

After continual Irish resistance with greater advocacy for home-rule and further concessions, the Penal Laws were almost completely nullified by relief and emancipation acts which came in 1791 and 1832. The very last vestiges of the Penal Laws were finally expunged only in 1920 on the eve of Irish independence.

The inscription on the base of the MacSwiney Chalice reads: “ORATE PRO ANIMA D: DANIELIS SWYNE SACERDOTIS LISMORESIS DIAECESIS QUI ME FIERI FECITA 1640, Pray for the soul of Mister Daniel Swyne, priest of the Diocese of Lismore, who had me made in the year 1640.” It would be kept in the MacSwiney family for the next 268 years and was used by various priests of the family. With our mind’s eye we can picture the stirring image of these brave priests providing the graces of the Mass in hidden away barns and fields to the poorest and most deprived members of Christ the Good Shepherd’s flock.

The first inheritor of the chalice was Owen MacSwiney the Bishop of Kilmore, who was the last bishop left in Ireland at the time of Cromwell’s purge. He was the only bishop in Ireland from the end of 1661 until October or November 1662 and from 1654 until October 1659. He was unable to leave the country for safety on account of his old age and infirmity. He died in 1669.

Another notable inheritor of the chalice was Father Patrick MacSwiney (1791-1865), who became dean of the Irish College in Paris, one of many seminaries founded in continental Europe to train Irish priests during the suppression of Catholic schooling in Ireland. In turn, he willed it to his nephew, Father Denis MacSwiney (1824-1906) who was working back in Ireland as the Vicar General of the Diocese of Cork and Ross. In 1896 Father Denis sent the chalice to the next generation of family priests who had immigrated to America.

Among these emigres were four brothers who all became priests. They were the cousins of Father Denis. Their names are inscribed upon the chalice: “MACSWEENY FRATRES SACREDOTES NEO EBORACENSES A.D. 1862-1908 R.R. DD PATRICIUS, EDUARDUS, JOANNES ET FRANCISCUS, MacSweeny Brothers, Priests of New York, Right Reverend Doctors of Divinity Patrick, Edwin, John and Francis.” Father Patrick set sail for America in 1848 at the age of 11 with his father, O’Callaghan MacSwiney, on the Famine Ship named Swatara. In 1850, the mother Honoria Harnett MacSweeny sailed to New York with the remainder of the family on the Brig Garland.

In 1908 the chalice finally left the care of the MacSwiney family when it was donated to St. Joseph’s Seminary in Yonkers. The letter of conveyance, which is kept in the same box as the chalice, reads:

“Calix Filiorum Suibhanei. This was kept for two hundred sixty eight years in the family of the priests whose names are on it, and was deposited in the museum of the Great Seminary in New York by Rev. Edward McSweeny (or Mac Swiney), on the feast of Saint Bartholomew 1908. It was made in 1640 for the priest named in the legend, and is small and plain, tho lastly — suitable for easy carriage and concealment in those days of blood. It was regilt and then reconsecrated by Archbishop Corrigan (’59 Mount Saint Mary’s,) and used by him at the consecration of St. Brigid’s Church, Manhattan, New York City, in 1898, the pastor of the church being the Rt. Rev. Patrick Francis McSweeny, senior of the McSweeny brother-priests.”

The Eucharistic faith of these brave Irish priests and faithful during the days of the Penal Laws is just about impossible to explain to those who do not believe. Sadly, even for many Catholics today, the notion of the Blessed Sacrament as the Bread of Life has been lost. For the true disciple of Jesus, though, the Sacrament of the Eucharist is just as much a necessity for the sustenance of the soul as daily bread is for the body.

In reference to his coming Passion, Our Lord Jesus asks: “Are you able to drink the chalice that I am to drink?”(Matthew 20:22). Those brave souls risking their lives to attend Mass where the MacSwiney Chalice was used during “those days of blood” gave a firm “yes” to this all important question. Through the intercession of St. Patrick, may we be able to say the same for ourselves.