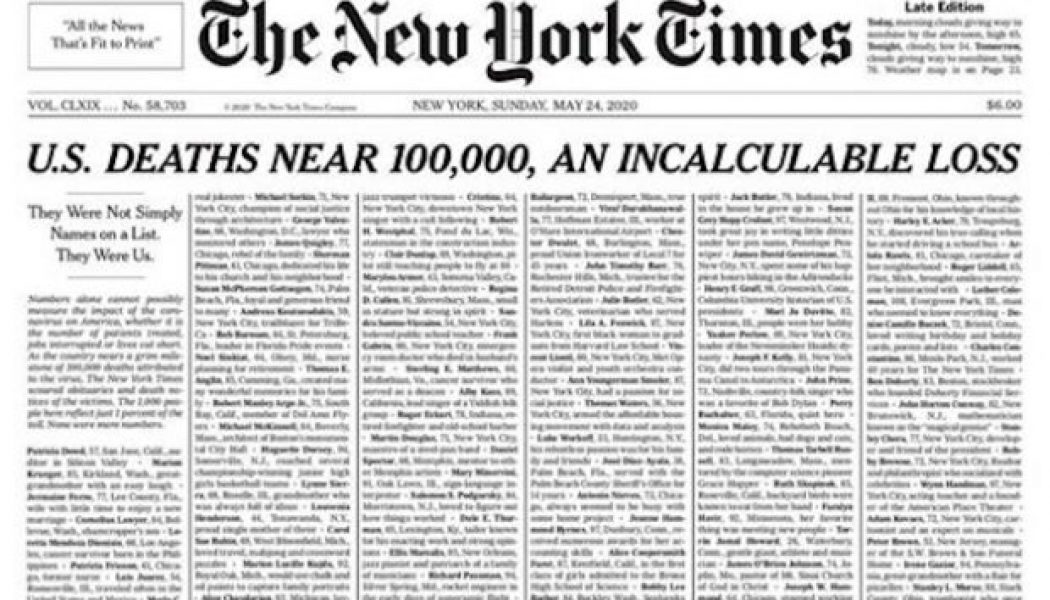 When it comes to religious media, there is nothing like the Catholic press. Spanning the doctrinal spectrum, there are 600 Catholic-based news websites and newspapers in the United States and Canada alone. In the past few years, the diversity of the Catholic press has provided a wealth of information and insights to readers and to mainstream journalists.

This is a trend that has, of course, affected all news media and across many other industries, such as hospitality and tourism to name just two. Secular news outlets, particularly local newspapers, faced an uphill battle before the coronavirus. They face an even tougher battle now that advertising has dried up amid an ever-worsening economy.

Over the last two months, the nation’s unemployment rate has ticked up. At the same time, layoffs have affected many large newsrooms like The Atlantic despite some of the best pandemic coverage. If technology like the internet has led to the slow death of print, the pandemic has accelerated what always seemed like the inevitable. Indeed, as Axios recently pointed out, no publisher is immune to COVID-19. It’s something newspaper publishers are monitoring very closely as their editors and reporters work from home and continue to report on the pandemic.

Catholic media outlets are not immune to such hardships. The first real sign that the situation was worsening came on April 9 when Bayard, which owns and operates 190 magazines, announced it would cease print publication of four magazines: Catechist, Hopeful Living, Today’s Catholic Teacher and Catholic Digest. This last monthly magazine, which has been published since 1936, boasts a circulation of 300,000. Catholic Digest also has a website that is updated regularly. It’s reach, as expected, is greater online — with traffic reaching nearly 16,000 visits each month.

Once the virus started to spread in mid-March and many states instituted lockdown orders (when houses of worship were also shuttered), the Diocese of Pittsburgh announced that its longtime newspaper, Pittsburgh Catholic, would cease publication of its weekly print edition. Those papers took in revenue from advertising as well as individual parishes that distributed it at churches. Catholic Outlook, the newspaper published by the Diocese of Tucson, Ariz., was also scheduled to end its print edition. Only after the diocese obtained a Small Business Administration loan did the diocese decide to keep printing.

Diocesan publications remain a primary source of news for American Catholics. With churches closed, the online versions of these newspapers are either not as popular with readers — especially older parishioners — and made to compete with other websites for people’s time. At the same time, many Catholic newspapers also rely on subscriptions and advertising to cover costs. A decrease of both those revenue streams has resulted in the possibility that many print editions of those newspapers people pick up at church each Sunday could die for good this year.

America magazine reported on the troubles of some Catholic-run newspapers last month as the coronavirus continued to ravage the economy and churches remained closed through Easter. Here’s what the industry faces as churches remain closed and social distancing orders are enforced by governors.

“The collections are way down across the board and especially when we miss a big attendance Mass, like Easter. That’s going to have a domino impact on things,” said J.D. Long-Garcia, the president of the Catholic Press Association. Mr. Long-Garcia, a senior editor at America, said that the economic recovery for the U.S. church will naturally “lag behind” the nation’s recovery.

The C.P.A. has established a Covid-19 task force to address the continuing revenue crisis and to meet with leaders of diocesan publications by region. The association is also considering opening an emergency fund to help keep Catholic publishers in business.

The Poynter Institute for Media Studies reports that more than 70 community newspaper sites had laid off or furloughed staff, cut the frequency of publication or suspended publication altogether since the advent of the health crisis. Layoffs also have affected radio, television and digital media, but they have not been as extensive as those in print journalism.

“We are expecting more publications to close, and the role of the C.P.A. is to mitigate that,” said Mr. Long-Garcia. He has already watched the number of Catholic publications decline over the last two decades, owing, in part, to the rise of digital media.

The CPA, in its own (print) monthly newsletter The Catholic Journalist to members in May, moved its annual conference slated for this summer in Portland to a virtual one. It will certainly become a forum for publishers big and small to trade insights on the challenges affecting their newspapers. The organization’s executive director, Tim Walter, highlighted the importance of its members under a column with the headline, “During quarantine, the value of Catholic publications becomes measurably apparent.” This was the biggest takeaway as diocesan newspapers shift their focus online:

Your work and services are needed more than ever.

Your products are keeping Catholics connected, informed and engaged.

They are delivering the bishops message to build community, teach and evangelize and every pastor and bishop needs that right now.

In a guest column for America last week, Long-Garcia reiterated the importance of print publications despite the hardships they face these days. Here’s his main argument, complete with a quote from Canadian philosopher Marshall McLuhan, a media theorist who coined the phrase “the medium is the message.”

Today, leaders of Catholic publications—news outlets, diocesan periodicals and other tools of evangelization—are asking themselves important questions about their print products. Can they continue to produce hard-copy newspapers and magazines at the same frequency, if at all? Perhaps more important, should they?

These are not easy questions. There are many dimensions to consider beyond dollars and cents. But advertising is nevertheless a good measure.

“In the world of advertisement, you do not start by the creation of an ad, but by studying the effect you wish to elicit,” Mr. McLuhan said in a 1972 interview with L’Express. “You create the cause after the effect has been defined.”

Advertisers consider their audience and what they would like their audiences to do after they see their ad. Advertisers still like print because people are less likely to multitask when reading hard copies, and if you are paying for an ad, you want people to pay attention. According to a 2018 study by the London-based media consultant firm Ebiquity, print advertising still has the highest return on investment.

It may be for secular media, but Long-Garcia cites some statistics in his column that are worth consideration.

Yes, nearly a quarter of people in Catholic households read a diocesan print publication, a number that highlights the importance of print.

The trend in mainstream secular media has been the opposite, with print readership shrinking and internet and cable TV growing. In other words, there is still value in these small newspapers located in bins inside churches — along with bulletins — that parishioners can grab on their way in and out of church every Sunday. Without physical church to go to, these newspapers often lose their largest audiences. It’s another fallout from the pandemic that has taken the lives of some 100,000 lives — a number recently made to resonate by The New York Times after they published 1,000 names of those who died on their front page. And yes, it was an editorial decision that was much more powerful when made in print.

While it’s true that diocesan newspapers often serve as the mouthpiece for the local bishop, they also offer plenty of local news from parishes and news that secular news sites and weeklies would not necessarily cover.

But the trend towards digital is inevitable. What the trends in Catholic media show is that readership, without print, may simply evaporate. Long-Garcia makes another excellent point when he argues that “the church needs to engage with audiences using digital platforms and to do so more often” — but that print remains key.

But we cannot throw away print. Choosing to produce only a digital product is choosing economics over evangelization. It is choosing who you are evangelizing with, even though faith is meant to be universal.

Being a church that communicates effectively requires being aware of the strengths of each medium. This is the classic “both/and.” Being committed to communicating via print and digital platforms says the church is committed to reaching people in whatever platform they prefer.

Print will, without question, continue, even if it never regains dominance. Those who continue publishing will stand out from the rest and will be signaling that what they say is worth the extra expense. The Catholic Church in the United States and throughout the world has a story to tell. And it is a story that is worth telling in print.

Part of the story of this pandemic is how it will continue to affect our society, our priorities and spending habits going forward. The death of Catholic print media may very well be part of the collateral damage of post-pandemic America.