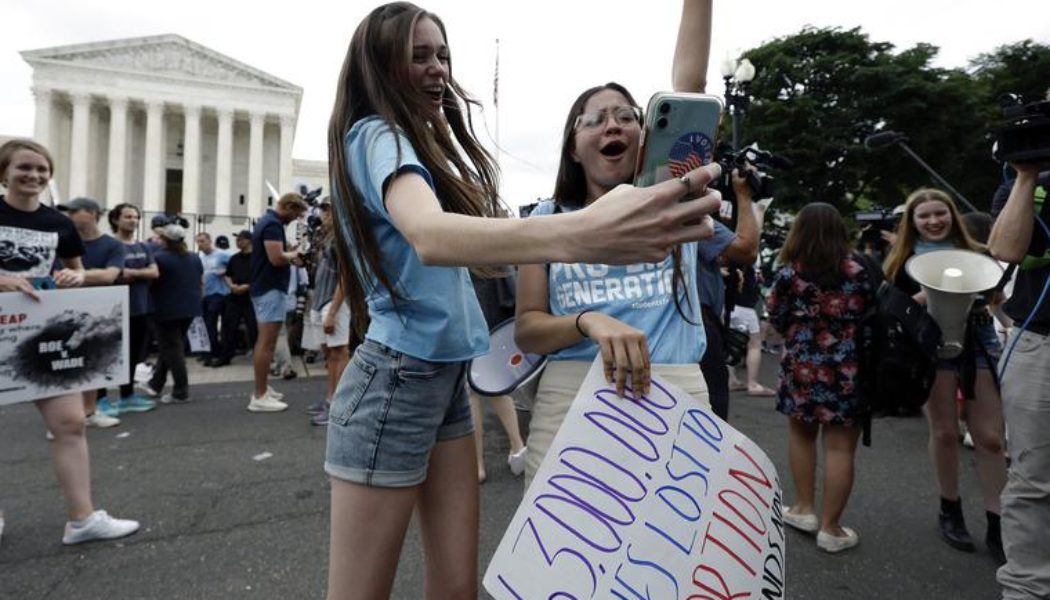 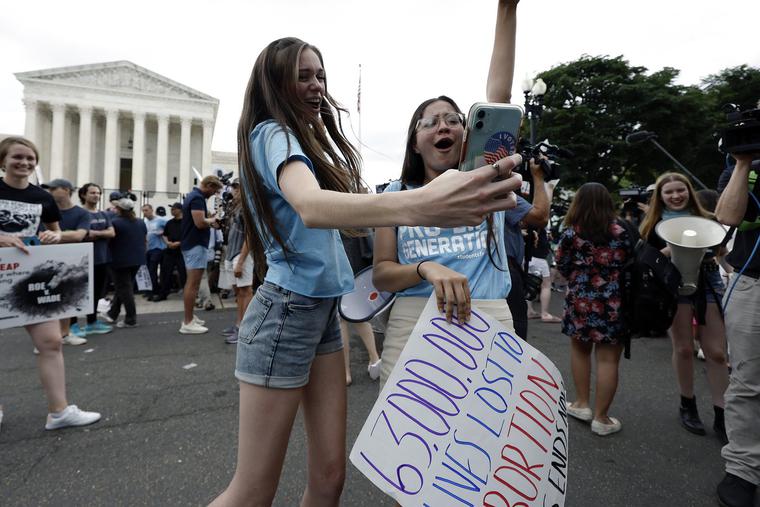 It seems impossible that I am writing the following words: Today, the United States Supreme Court overturned the two decisions that had invented out of whole cloth a constitutional right of legal abortion: Roe v. Wade and Planned Parenthood v. Casey. Its opinion in Dobbs v. Jackson Women’s Health Center means that the Constitution no longer protects abortion. Abortion is once again — as it was before the date of the Roe opinion, Jan. 22, 1973 — a matter for state lawmaking.

This lengthy paragraph from the majority’s opinion summarizes its conclusions:

Roe was on a collision course with the Constitution from the day it was decided. Roe found that the Constitution implicitly conferred a right to obtain an abortion, but it failed to ground its decision in text, history, or precedent. It relied on an erroneous historical narrative; it devoted great attention to and presumably relied on matters that have no bearing on the meaning of the Constitution; it disregarded the fundamental difference between the precedents on which it relied and the question before the Court; it concocted an elaborate set of rules, with different restrictions for each trimester of pregnancy, but it did not explain how this veritable code could be teased out of anything in the Constitution, the history of abortion laws, prior precedent, or any other cited source; and its most important rule (that States cannot protect fetal life prior to “viability”) was never raised by any party and has never been plausibly explained. Roe’s reasoning quickly drew scathing scholarly criticism, even from supporters of broad access to abortion.

The Casey plurality, while reaffirming Roe’s central holding, pointedly refrained from endorsing most of its reasoning. It revised the textual basis for the abortion right, silently abandoned Roe’s erroneous historical narrative, and jettisoned the trimester framework. But it replaced that scheme with an arbitrary “undue burden” test and relied on an exceptional version of stare decisis that, as explained below, this Court had never before applied and has never invoked since.

Justice Alito authored the majority opinion for himself and Justices Thomas, Gorsuch, Kavanaugh and Barrett. Justice Roberts, in a deeply disappointing concurrence in the judgment only, would leave Roe and Casey standing, and agree only that the Mississippi law could be upheld on the basis of a new standard he just invented about women’s having a reasonable opportunity to obtain an abortion. Justices Kagan, Sotomayor and Breyer dissented.

Today’s opinion means that some states will continue — as they have done in recent months — to protect unborn human life in the womb according to the will of their populace. Others, however, will continue to legislate — as they too have done in recent months — to allow the destruction of human life in the womb at every single stage of pregnancy for any and all reasons. Many states will adopt “intermediate” positions, prohibiting abortion at some times and/or for some reasons. They might also regulate the conditions under which legal abortions might go forward — for example, health settings, waiting periods, parental involvement and so forth. There will be an enormous amount of work to do for local pro-life organizations in every state.

It also seems quite likely that the Court’s statements that the Constitution not address abortion at all — particularly in Justice Kavanaugh’s concurrence insisting on this point — will reignite a debate that has been evergreen since 1973 whether the Constitution’s 14th Amendment in fact does the opposite of what Roe had concluded: protect unborn life from intentional destruction. After all, this amendment guarantees: that nostate shall “deprive any person of life, liberty, or property, without due process of law; nor deny to any person within its jurisdiction the equal protection of the laws” (emphasis added). Important thinkers are already urging the pro-life movement to once-again move in this direction.

Lawyers, activists and the media will spill oceans of ink on this opinion for months and years to come. There are so many wonderful facets of it that I could immediately spill several gallons myself. But for reasons of length, I highlight below only a few leading themes.

First, the Court signaled that not only respecting abortion, but respecting all claimed “federal constitutional rights” not appearing in the actual text of the Constitution, the Court will no longer equate them with the personal preferences of five or more unelected Justices. Instead, it will consult Americans’ actual legal history and tradition, both at the time the claimed constitutional provision was enacted, and from that time to the present, to determine whether the Constitution’s guarantee of “liberty” includes the claimed right.

Accordingly, the majority opinion closely examined states’ abortion laws at the time of the enactment of the 14th Amendment (1868) — the amendment whose “liberty” clause was the claimed source of the abortion right. It found that a large majority of states in 1868 forbade abortion from the beginning of pregnancy, and that the remaining states did so in the years immediately following. It also catalogued states’ and territories’ continuous banning of most or all abortions from that time to the time Roe v. Wade was decided in 1973. It resoundingly concluded, therefore, in this part of its opinion that “The inescapable conclusion is that a right to abortion is not deeply rooted in the Nation’s history and traditions. On the contrary, an unbroken tradition of prohibiting abortion on pain of criminal punishment persisted from the earliest days of the common law until 1973.”

An interesting aside here. If the Court means what it says here about how “nontextual” constitutional rights are announced, then Obergefell v. Hodges, the same-sex marriage case, could fall later. That opinion is based largely upon a method of reading the Constitution now resoundingly repudiated in Dobbs, to wit: ignoring the history of the constitutional provision on which the claimed right is based; ignoring the laws of the 50 states from that time to the time of the case at hand; and consulting instead the personal opinions of five Justices, the laws in some foreign countries, and evolving public opinion not expressed in law. Obergefell also relies heavily upon the now-overturned Casey opinion’s patently ridiculous claim that the 14th Amendment’s “liberty” clause protects “the right to define one’s own concept of existence, of meaning, of the universe, and of the mystery of human life.”

Again and again in its opinion the Court states that it is not overturning Obergefell, and this is technically correct. But the logic of Dobbssubstantively repudiates Obergefell nevertheless. Only time will tell whether a case arises providing the Court the opportunity to revisit this case.

Second, and equally remarkable for its clarity and sense, is the Court’s thrashing of the Roe and Casey opinions — not only their holdings, but their nonsensical and even nonlegal “methods.” It calls them “egregiously wrong.” This is the primary reason why the Court decided to depart from its practice of stare decisis, which involves respecting and applying prior holdings to later cases. The Dobbs majority essentially calls Roeand Casey junk — irrational, nonlegal nonsense.

Third, a note about Roberts’ profoundly disappointing and legally convoluted opinion. He refuses to engage the majority’s devastating analysis of how the Court (including Roberts himself) has promised to interpret the contents of the 14th Amendment’s liberty guarantee. He ignores history, tradition and precedent. And he makes up a new rule out of whole cloth — exactly as did Roe and Casey. He would guarantee women the right to have a “real choice,” “adequate opportunity,” and “sufficient time” to “decide for herself,” whether to “exercise the right Roe protects.” As a consequence, Roberts would vote to uphold Mississippi’s 15-week ban, because it provides women this time and opportunity, but not vote to strike down Roe. Thus he concurred in the judgment only, but not in the majority’s opinion.

The dissent by Kagan, Breyer, and Sotomayor is predictably hysterical. It gives no quarter to the interests of any human being before birth. It completely sidesteps the majority argument about the American people’s democratic choice to protect unborn life from the founding of the country until 1973. It characterizes the majority as continuing a sexist tradition begun in the 19th century. It predicts future catastrophes for women’s health, freedom and equality going forward.

June 24, 2022, is a new and wonderful day for pro-life advocates. It is the culmination of unrelenting effort — unrelenting scholarship, unrelenting willingness to suffer the slings and arrows of elite opinion, unrelenting witness to the value of every single human life, unrelenting care of pregnant women and mothers and post-aborted women, and unrelenting marches, letter-campaigns, visits to legislative offices, and funding drives. It is also a wonderful day for the United States on the world stage. One of the most powerful nations on earth has ceased to declare the destruction of the innocent a “human right,” and has instead allowed governments to protect helpless human beings.  Finally — and permit me this lawyerly finish — it is a wonderful day for democracy, and for the Constitution that guarantees it.