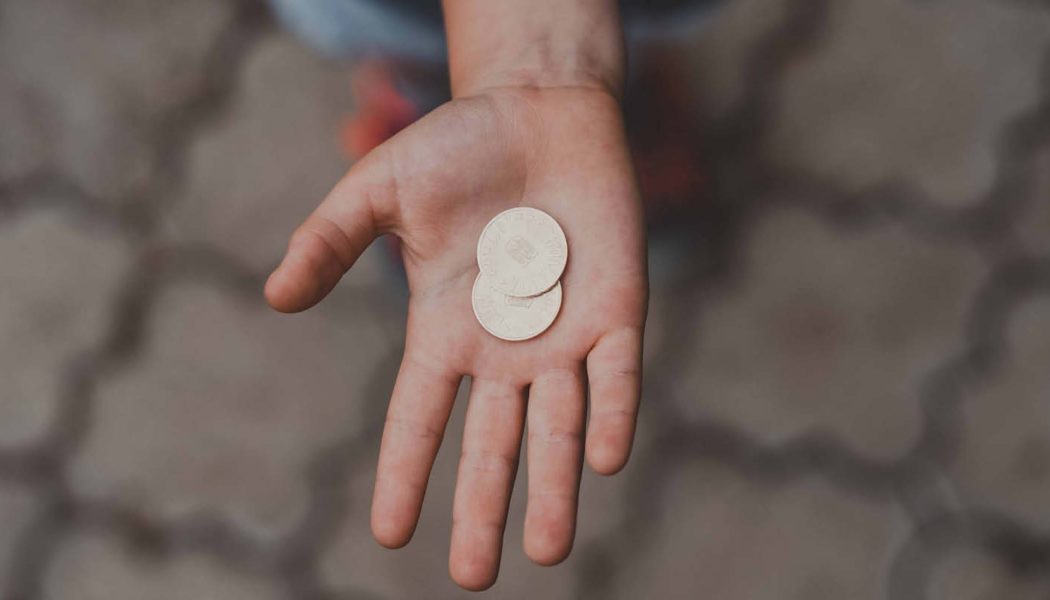 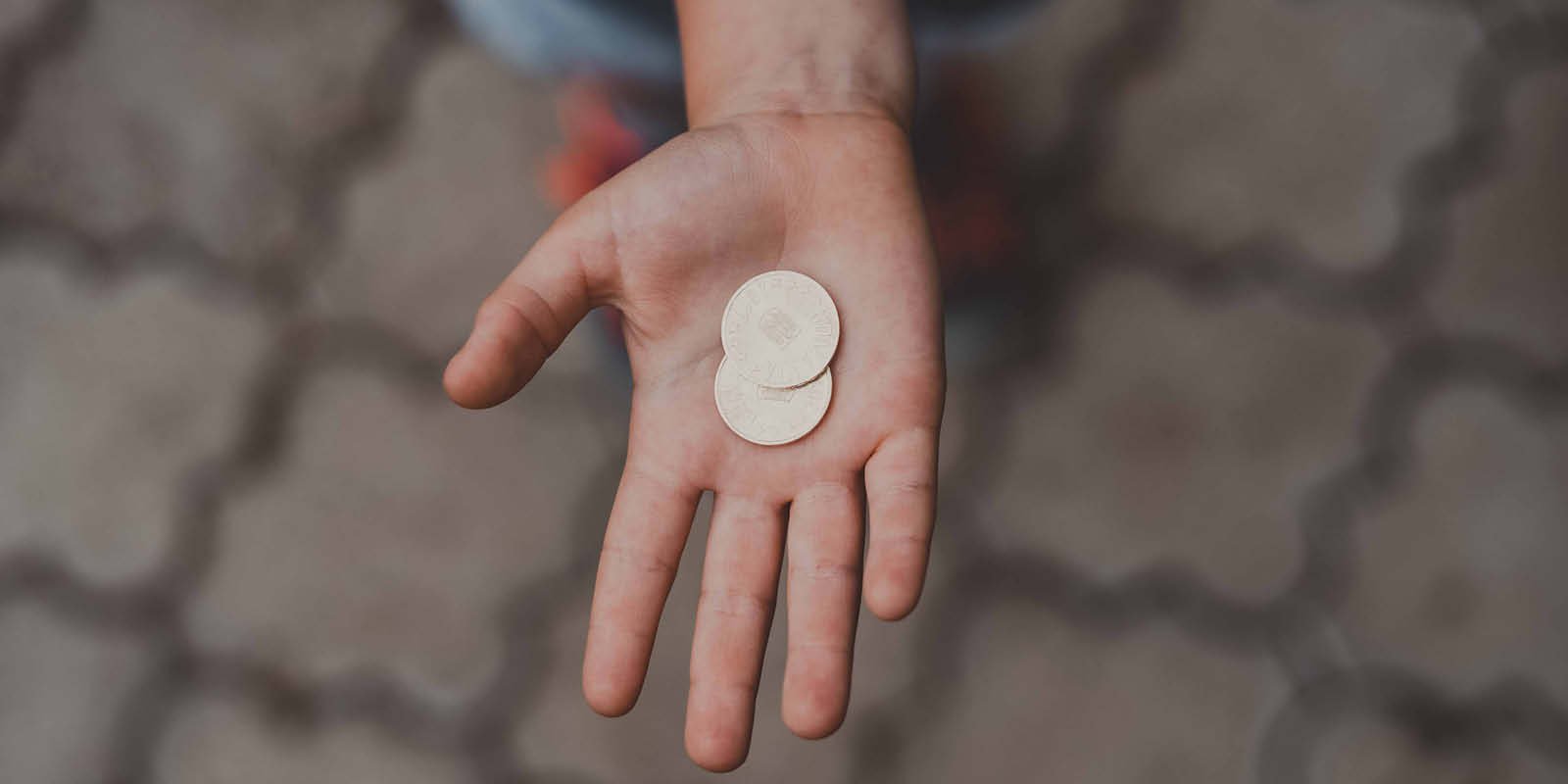 In the Gospel for the 32nd Sunday in Ordinary Time, Jesus is weeks away from his sacrifice on the cross when he observes a poor woman giving all she has to the Temple treasury. She stands as a warning against the wrong kind of giving — and a beautiful example of the remarkable gift he makes on the cross for us at every Mass.

We get the phrase “the widow’s mite” from the King James translation of this Gospel passage.

It means a small but significant contribution. Across from the Temple treasury, where people donate money for the priests and their good works, Jesus sees “Many rich people put in large sums.” Then, “A poor widow also came and put in two small coins.”

Jesus tells his disciples, “Amen, I say to you, this poor widow put in more than all the other contributors” since they “all contributed from their surplus wealth, but she, from her poverty, has contributed all she had, her whole livelihood.”

The same thing happens in the first reading, from First Book of Kings, only here a prophet directly requests that a widow hand over her whole livelihood. She says that she plans to prepare something for herself and her son — a last meal, because soon they will starve. But God has told him to seek out a widow of Zarephath to feed him, so he asks her to give him some of that bread first.

She does, and a miracle occurs — “She was able to eat for a year, and he and her son as well; the jar of flour did not go empty, nor the jug of oil run dry, as the Lord had foretold through Elijah.”

We can imagine the same kind of thing happened for the widow in the Gospel — she gave her whole livelihood to the Temple priests, and was blessed immeasurably by God himself. After all, we were made in the image of God, who is gift — and so the more we give, the more like him we become.

But what about the priests who received the widow’s mite? How will they be treated?

He says, “Beware of the scribes, who like to go around in long robes and accept greetings in the marketplaces, seats of honor in synagogues, and places of honor at banquets.”

Ouch. I don’t know what fundraising best practices were in the ancient world, but today, they often include dressing up at meet-and-greets followed by dinners featuring expensive tables and honored guests.

Jesus follows up with: “They devour the houses of widows and, as a pretext recite lengthy prayers. They will receive a very severe condemnation.”

It is fascinating that Jesus here praises a widow who gives her livelihood to priests while condemning priests who take the livelihood of widows. Many religious movements throughout time have survived on the donations of rich widows (or heirs) who were impressed by the charms of charismatic leaders — but in the cases Ronald Knox tracks in his book Enthusiasm, God never told the leaders to ask widows for all they have, as he did with Elijah.

So it must be asked: Is the Church today more like the widow, or more like those who take everything from her?

Since Jesus’s warning is so strong, we need to carefully consider: How much has the fundraising strategy of the Church compromised its witness? What truth has the Church held back on, at a local, national, or Vatican level, because we didn’t want to offend donors?

For instance, for centuries the Church taught that those involved in the slave trade should be excommunicated — but the Church rarely excommunicated any. Was this failure to practice what it preached in part because of the financial contributions of slaveholders? And many men and women were enslaved as a result? In our own time, the Church has taught against abortion and the redefinition of marriage, but has tolerated prominent figures who promote both, to the detriment of society. Did the Church again damage its long-term witness for short-term gain?

St. Bede points out that Jesus “does not forbid that those to whom it falls by the rule of their office, should be saluted in the marketplace or have chief seats and places at feasts.” Instead, Jesus teaches that we be very wary of those who seek them out. “First, we should not be seduced by their hypocrisy,” he says, and “secondly, we should not be excited to imitate them.”

Rich people can be part of the program, certainly. Zacchaeus was a rich man who gave half of his goods to the poor, causing Jesus to declare, “Today salvation has come to this house.” But others gain the kingdom by giving only a cup of water.

We should imitate the widow in the recklessness of her giving. Christ did.

Jesus had even less than the widow had to give. In his reckless love for mankind, he gave everything away. First, he gave his Church to Peter, then he gave his mother to John, then he let the soldiers take his cloak. In the end he had only two things to give, and he gave those to us: His body and his blood.

In fact, that is what he gives at every Mass. Jesus does not “offer himself repeatedly, as the high priest enters each year into the sanctuary with blood that is not his own,” says this Sunday’s Second Reading, from Hebrews, but instead “offered once to take away the sins of many.” We experience that one offering at each Mass.

When Jesus was asked about taxes he asked whose likeness and inscription is on the coin? They replied “Caesar’s” and he said to therefore “render to Caesar the things that are Caesar’s and to God the things that are God’s.” In the Eucharist we receive a host, that is like a coin stamped with his real presence. Jesus Christ donates his widow’s mite to the Temple of the Holy Spirit which is our body.

What does he want in return? He wants us to give everything. We can offer our own body and blood — our deeds and our souls — for Jesus Christ. He wants us to be a mother who is open to life and always ready to serve her children; a father who works all day, and then serves his family instead of himself in the evening; a student dedicated to her studies before all else; a single person who is faithful to his state of life and its demands of morality and charity.

Our reward won’t be a fancy dinner with the bishop in “a sanctuary made by hands.” It will be an eternal banquet with Christ in “heaven itself.” Even in this life, like the widow who gave all to Elijah, we will receive a jar that never goes empty. For us that jar is the chalice and the tabernacle, the Eucharist that never runs out, the grace that just keeps coming.

Alan here, your hosting expert with a review of a web hosting company called scalahosting. Your very own domain shop awaits | cancel your existing domain renewals today | 100% newbie friendly. It can be rented out to various companies for their offices, stores, and other commercial activities.