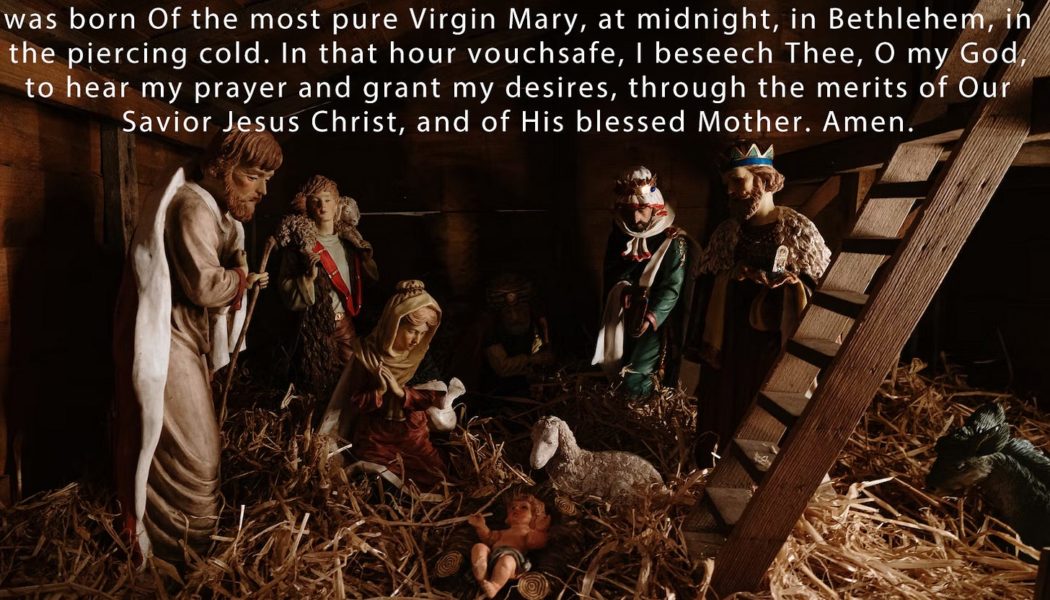 Like many of you, I have been saying the St. Andrew novena this Advent. “Hail and blessed be the hour and moment In which the Son of God was born Of the most pure Virgin Mary, at midnight, in Bethlehem, in the piercing cold. In that hour vouchsafe, I beseech Thee, O my God, to hear my prayer and grant my desires, through the merits of Our Savior Jesus Christ, and of His blessed Mother. Amen.”

The language is hauntingly beautiful.

I’ve probably said this prayer hundreds of times. And yet, there is something I missed before: I was time traveling to Bethlehem.

Because God is outside of time, He knows, of course, every prayer that will ever be uttered, even unto the end of time. We tend to have the point of view that our prayers, works, and sufferings “work” now, and forward into the future. For example, perhaps the grace of suffering an illness well, that we offer to God, can help bring about the conversion of some poor sinner. And yet, why ought we to believe that this grace would only be efficacious for future events? As God is outside of time, surely there is no contradiction in Him bringing about events before we have ever performed the acts that depend on them. After all, God does not suddenly “find out” that we are praying; He has heard our prayers from all eternity.

C.S. Lewis noted this as well. He writes that, “[Any] event certainly has been decided—in a sense it was decided ‘before all worlds’. But one of the things taken into account in deciding it, and therefore one of the things that really cause it to happen, may be this very prayer that we are now offering. Thus, shocking as it may sound, I conclude that we can at noon become part causes of an event occurring at ten a.m.”

This does sound shocking when we first hear it. The St. Andrew novena is even more shocking. Note well what the prayer does not say about the hour and moment of Jesus’ birth. It doesn’t say, “In honor of that hour hear my prayer.” No, it says, “In that hour hear my prayer.” We are asking God to hear our voice, at a specific moment in time—before we were even born. We are asking Him to hear our voice across time and space. To echo Lewis, as shocking as it may sound, we are doing nothing less than asking God to let us time travel, so that in some very real way, we are present at that hour and moment, in Bethlehem with Him and His mother.

In the piercing cold.

There is another famous “time travel” prayer that you are also likely familiar with. That is the “Prayer for St. Joseph’s intercession before God.” That prayer uses equally shocking language when it says, “Oh St. Joseph, I never weary contemplating you and Jesus asleep in your arms. I dare not approach while he reposes near your heart. Press him in my name and kiss his fine head for me, and ask him to return the kiss when I draw my dying breath.” Asking St. Joseph to kiss the baby Jesus who is asleep in his arms? Again, this is language that only makes sense if we believe this prayer is able to be heard across space and time, as St. Joseph is holding the baby Jesus.

Perhaps this is merely pious language that is not meant to be taken literally? I contend we have every reason to take it literally. As we have said, God is not bound by space and time. Surely Mary and St. Joseph are bound by space and time though? Of course, but are we to suggest that God could not have granted them a special grace to somehow know all the prayers that would be said in the future? Let us not limit the providence of Him who knew us before we were formed in our mother’s womb.

A final consideration. It may perhaps be objected that if God knows our prayers from all eternity, then it hardly makes sense to ask him to hear our prayer at a certain hour and moment. I would simply note that while God of course exists outside of time, He is also the author of time, and in the Incarnation, as St. John Paul II notes, “Eternity entered into time.” Who can doubt the graces that would flow forth from that midnight hour in Bethlehem? In a word, through the Incarnation, God bridges the vast chasm between time and eternity, and deigns that His creatures, acting in time, can have a real effect on what has been foreseen through all eternity. Then, to ask God to hear our prayer “in the fullness of time” is nothing other than asking Him to allow us to participate in His providential plan—a plan that consists of grace filled moments.

This thought ought to fill us with humility and joy. That, at the end of all worlds, we may be told by the Holy Family, “We remember the words that you spoke to us. Long ago. At midnight. In Bethlehem. In the piercing cold.”

See you in Bethlehem.