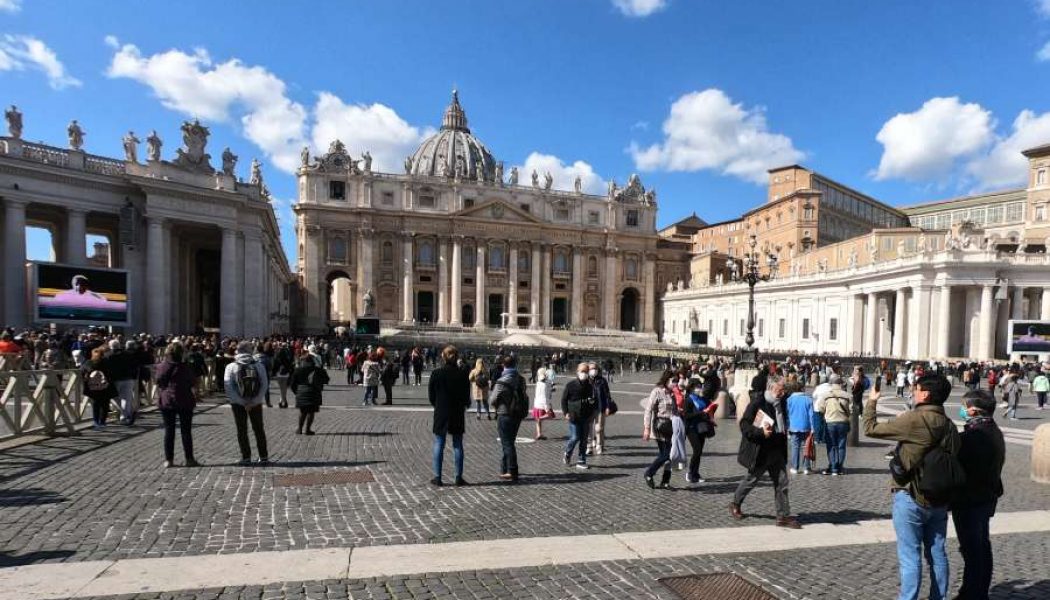 Vatican City, Mar 8, 2020 / 07:30 am (CNA).- In a video streamed live to St. Peter’s Square, Pope Francis prayed for those suffering from the “coronavirus epidemic” and encouraged Catholics to live through this trial with the strength of faith.

“I join my brother bishops in encouraging the faithful to live this difficult moment with the strength of faith, the certainty of hope and the fervor of charity,” Pope Francis said March 8.

“The season of Lent helps us all to give an evangelical sense also to this moment of trial and pain,” he added.

The pope led the Sunday Angelus prayer via video filmed in the library of the Apostolic Palace in response to ongoing concerns about the spread of coronavirus in Italy and Vatican City. Traditionally, the pope leads the Angelus from the palace balcony overlooking St. Peter’s Square.

“Today’s Angelus prayer is a little strange with the pope ‘caged’ in the library, but I see you, I am close to you,” Pope Francis told the smaller than usual crowd in St. Peter’s Square at the beginning of the video broadcast.

“This way of praying the Angelus today is done to carry out preventive measures, so as to avoid crowds of people, which can favor the transmission of the virus,” he said.

The Italian government imposed a strict quarantine on March 8 for northern and central regions of Italy, including Milan and Venice.

Most of the 5,883 people who have contracted Covid-19 in Italy have been in the northern regions of the country. The Italian Ministry of Health reported 76 confirmed cases in Rome’s Lazio region on the evening of March 7.

With 233 coronavirus-related deaths in Italy in two weeks — 85 of which have occurred in the past two days — Italy has had the most Covid-19 mortalities outside of China.

Italy’s museums, archaeological sites, concerts, and  movie theaters have all been closed until April 3, the Italian Minister of Tourism said March 8. All schools and universities will also remain closed throughout the country until March 15.

Pope Francis said March 8 that he is “close in prayer to people suffering from the current coronavirus epidemic.”

Vatican City confirmed its first case of coronavirus on March 5, and later announced that both the pope’s Angelus address and Wednesday general audience would take place over live video.

“The love of Jesus has no measure,” Pope Francis said in the video message. “It is a free, unconditional choice, a free initiative, a divine friendship that asks for nothing in return.”

“Being witnesses of Jesus is a gift that we have not deserved: we feel inadequate, but we cannot hold back with the excuse of our inability,” the pope said.

After the Angelus, Pope Francis appeared in the window of the Apostolic Palace to give a blessing to the pilgrims in St. Peter’s Square.

Pilgrims cheer as Pope Francis appears in the window after his Angelus video message to give a blessing. 🙏 🇻🇦 pic.twitter.com/s0tFSlsc5u

“Jesus says to us too: ‘Stand up and do not be afraid’ … we must not forget that the baptism that we received made us witnesses,” Pope Francis said.