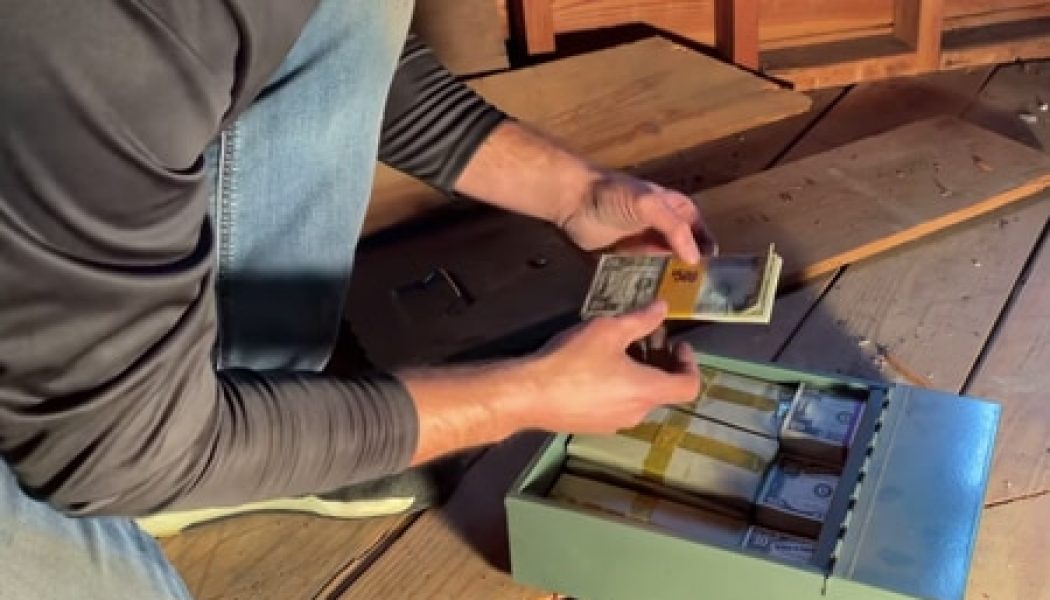 Keith Wille, a self-described treasure hunter and metal “detectorist,” has a motto: “You lost something. I find it.”

And that’s exactly what he did for one woman in Western Massachusetts who called him about trying to locate a cashbox potentially missing beneath the floorboards of the attic in her family home. The treasure hunt wound up being the best of 2021 so far, according to Wille, whose operations are based in Connecticut.

“One question I get all the time is how many treasures do you think are out there?,” Wille said at the opening of the episode of his show, “Rediscover Lost,” posted to YouTube on Wednesday. “I think there are countless treasures still out there, and if it’s there, I’ll find it.”

The treasure hunt in Western Massachusetts was the product of decades of rumor about hidden loot in the 1950s home, which was owned by the woman’s aunt and uncle. The woman’s mother moved in after her aunt died roughly five years ago, and the house is set to go up for sale soon. However, the family didn’t want to sell it without first finding the rumored treasure.

She believes the loot was hidden in the attic “a long, long time ago.” Floorboards in the space have white x- and star-shaped symbols drawn on them, piquing the family’s interest and leaving them with questions about where the cash was.

After decades of failed attempts to find the treasure, Wille said, the family grew tired of trying to figure out if a metal detector would work indoors and even hired a construction contractor to find the treasure underneath the floorboards. Their efforts weren’t fruitful.

The family eventually discovered Wille online and hired him to figure out where the money was hidden. The search started in early April with the treasure hunter getting a tour of the attic space. There, he spotted the damaged parts of the floor where people in years past had unsuccessfully searched for the money and figured out a game plan for how he would find the cash.

“Turning on my metal detector, I walked over to where light from the two windows intersected,” Wille said on his website. “The rumor was that a person could see the box through the floorboards when the light shined into the room. Naturally, I started in the middle of the floor, looking for cracks where light could shine through.”

Using the metal detector, an endoscopic camera and his iPhone, Wille kicked off his quest to find the stashed money in the attic space. It took only around 50 minutes before he struck gold.

With his endoscopic camera, Wille found the cashbox in one corner of the attic. He noticed jagged saw marks in the rafters of that section of the space, searched the floor and saw the keyhole of the cashbox. The treasure hunter then removed two suspiciously cut floorboards to take the loot out of its 63-year old hiding place.

Cash was packed to the lid of a metal box in the bundles, with individual bills dating all the way back to 1934, 1935 and 1950. The date Dec. 19, 1958, along with a teller number, was stamped on each currency strap, and highly collectible silver certificates were visible in three of the bundles, Wille noted.

“These were shortly after the Great Depression, so people were still holding onto cash, hiding it, clearly. There were still some trust issues with the banks,” Wille said in the video.

The cache of vintage banknotes totaled $46,000. Wille pointed out that in 1958, the purchasing power of that amount of money would be equivalent to $421,603 today.

“We found the cashbox. So, we retrieved it. The family now has closure on the cash,” Wille said. “They can sell the house.”

It’s unclear who hid the cashbox in the floorboards to begin with, but it’s likely that a family member of the woman did so.

“There were a number of possibilities of who could have hidden the treasure, but it’s not 100%,” Wille told MassLive.

In an interview with MassLive, Wille said he didn’t want to specify where in Western Massachusetts the home is to protect the family’s privacy.

Size. Also read up on forex trading for beginners to get an idea of how currency is traded and other useful information. Neuron.