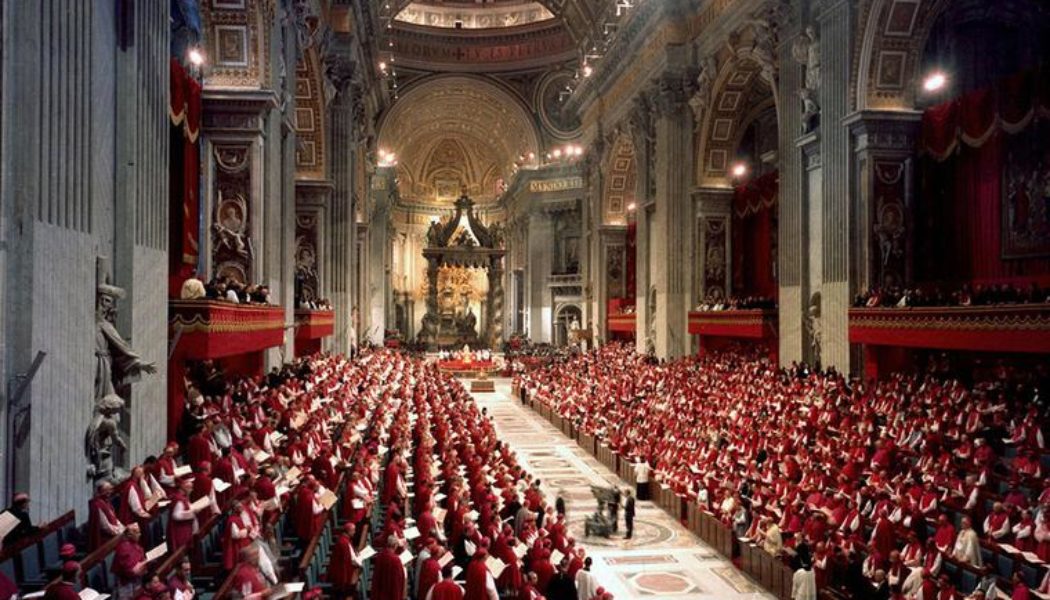 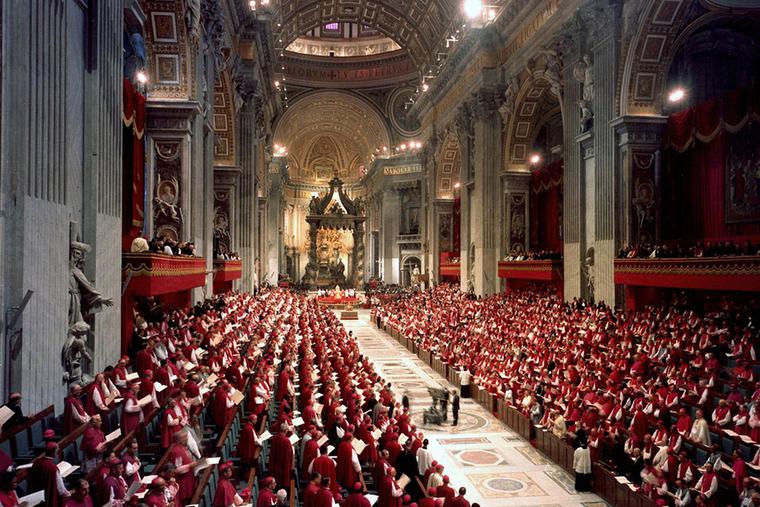 In 1977, I was a freshman at the University of Nebraska. I was in the process of rediscovering my Catholic faith and decided to attend the Newman Center on campus. What I discovered there was the greatest community of faith-filled people I have ever encountered — and that remains true all of these years later.

Thousands of young Catholics flocked there; and the daily Mass, which was at 10pm, was always packed. Religious vocations were nurtured there, and the Diocese of Lincoln, thanks to the Newman Center, was flush with seminarians.

However, according to many modern traditionalists who are endlessly critical of the “new Mass” of Paul VI as a horrible abomination, this success story should not have been possible, since the liturgy at the Newman Center was a Novus Ordo Mass, complete with guitars and lots and lots of songs from the St. Louis Jesuits and other “folk Mass” composers from the ’70s. There was no Latin, no incense, no chant, no altar rails and no diatribes from the pulpit about the evils of Vatican II. And yet, strangely, the Mass there was alive, orthodox and spiritually generative in profound ways.

The point to all of this is not to disparage the importance of good liturgy or to call for a return to those “folk Mass” days or to disparage the attempts of those who today seek to reinstitute certain traditional liturgical elements into the reformed liturgy. I love the traditional Latin Mass (TLM) and currently attend an ordinariate parish (St. Thomas More in Scranton, Pennsylvania) and love its high liturgy.

Nevertheless, for me, the main draw of the ordinariate parish I attend isn’t so much the beautiful liturgy (which I love) but the intentional community of deep faith that I have found there, just as I had found it in 1977 at the Newman Center. I also think this searching after communities of deep faith is one of the main draws for people who attend TLM parishes.

In reality, I would rather attend a Novus Ordo parish filled with people of faith than a TLM or ordinariate parish populated by fussy, complaining liturgophiles. The takeaway, therefore, is that what is driving so many people away from our parishes, in my view, is not the liturgy as such, since they are often celebrated just fine, thank you very much, but rather the dreary state of the suburban ethos of spiritual mediocrity that hangs over so many of our parishes like a foul miasma.

I recently gave a lecture in Baltimore at the Cathedral-Basilica of the Assumption of the Blessed Virgin Mary. Before my lecture, we were treated to the most magnificent vespers service I have ever attended, presided over by Archbishop William Lori.

The schola that led us in chanting the prayers was so exquisitely wonderful that it reduced me to tears within minutes. But the prayers were in English, and the text was from the post-Vatican II breviary. And what all of it proved, once again, was that it is indeed possible to celebrate the new rites with sacred beauty.

It is simply a monstrous lie that this is not possible, and therefore it is an equally monstrous distortion of the truth to say that the remedy for the ills that face the Church of today is to return to the older forms of the pre-conciliar liturgy. Furthermore, and this is key, the beauty of that vespers service was no mere theatrics and no mere exercise of artistic skill. It was very clear that this liturgy was the product of a community of Catholics who believed, who cared, and who wanted to express their faith with beauty and sacral devotion.

What I am getting at is that good liturgy, while a great good in and of itself, is not enough, since, taken in isolation from a sanctified form of Christian existence, it can become an end in itself, riddled with all kinds of ideological motivations. In other words, an instrumentalized — and indeed a weaponized — liturgy, no matter how beautiful in its constructions, can be pressed into service as a kind of theo-political statement from both sides of the liturgical debate. And any liturgy used as a political tool for either attacking Vatican II or for promoting liberal distortions of Vatican II is a liturgy gone sour.

Lace surplices under fiddleback chasubles can hide such ideological manipulations just as easily as denim Disney vestments over your hippie nehru jacket. And perhaps the former is even more dangerous than the latter, since it can posture as the more “pious” alternative, even as its leading advocates often promote a simmering rejection of the modern magisterium of the Church over the past 60 years.

Vatican II teaches us that the Eucharist is the source and the summit of our entire spiritual life (Lumen Gentium, 11). Therefore, the liturgy cannot and must not be sucked into the vortex of the ideological debates. What this also means is that true liturgical reform, which is needed, can only move forward when that reform is linked to the broader reform of our spiritual lives.

What this points to is the deep connection between liturgy and the pursuit of holiness. This is also precisely why Vatican II sought to reform the liturgy.

For many Catholics before the Council, the liturgy had become a passive experience, something the priest did up on the altar, in silence, and in a language that was not the mother tongue of those gathered. Mass had become a place of quiet contemplation, of private devotions, and not a place of communal worship in any outward way. I hasten to add, however, that I am not saying that one cannot participate in communal worship unless one is “doing something” outwardly or that one cannot enter into the liturgy interiorly. That, too, is a false notion of participation and was one of the primary failures of the post-Vatican II implementation of the reforms, where Mass veered into the opposite direction of an “activism” that was very superficial in its understanding of true participation. Nevertheless, I am speaking here of general trends, which were the major concern of the Council as it sought to reinvigorate a true spirituality of the laity and our active engagement with the liturgy as a true act of worship rather than a one-hour period of contemplation.

This reinvigoration of the laity was the goal of Vatican II since the Council Fathers understood that the challenges posed to the faith by the modern world required a robust and active lay presence as a leavening agent in the world.

Therefore, they opened the door to Mass in the vernacular, with greater dialogical participation from the gathered worshippers. This led to the creation of the Novus Ordo, which is now the ordinary form of the liturgy for the vast majority of Catholics and has been so now for about 50 years. And the bottom line is that the Mass of Paul VI, despite its often poor implementation, embodies elements of reform that were much needed. Further “reforms of the reform” are no doubt needed. But the vast majority of the laity do not want a return to the Latin Mass.

It must also be remembered that there were liturgical deficiencies in actual practice in the old Mass, as well. Priests often raced through the text, with mumbled and mangled Latin, with many Sunday Masses lasting no longer than 30 minutes. Homilies were very short, with little emphasis on the scriptural readings — readings that were often in Latin and not understood by the congregants who had to have recourse to missals for an interpretation.

Gregorian chant choirs were often nonexistent, which makes videos like the recently minted Mass of the Ages videos exercises in the false rewriting of our liturgical history as a simple decline from the glory days of beautiful Latin Masses to the banalities of today.

Finally, in this writer’s view, it is hard to imagine the missionary successes in places like Africa and Asia — regions where the Church is growing — without the Novus Ordo. When one looks at where the old Latin Mass still has a measure of local popularity, one finds that it is largely confined to France, the U.K. and the United States. But it is not popular even there among most Catholics, and it certainly gains little traction in cultures that are not European in origin. And once again, the energetic and living Catholicism in those countries, which are countries that know no other liturgy than the Novus Ordo, again gives the lie to the tiresome meme that this liturgy is incapable of creating and supporting sanctified communities.

The Mass of Paul VI is the Mass of many modern martyrs and saints. It inspired them, as it inspires me, when it is done within the context of people who actually believe. And those who say otherwise are, quite simply, wrong.