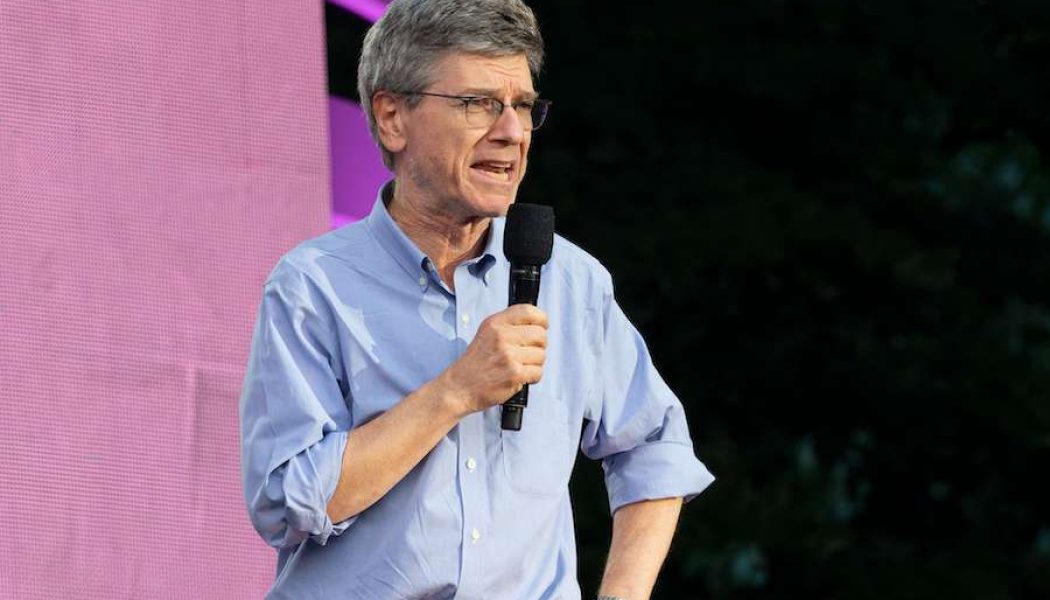 Vatican City, Nov 19, 2020 / 01:50 pm MT (CNA).- The Economy of Francesco summit kicked off Thursday with economist Jeffrey Sachs serving as a mentor for young “changemakers” to create a new world economy. Sachs, who has participated in numerous Vatican events in recent years, is an advocate for population control initiatives calling for the provision of contraception in the developing world, and a supporter of U.N. initiatives that call for universal access to abortion.

“Let me say that I would be delighted to work together with you,” Sachs told the young people participating in his virtual panel as they discussed how to promote child well-being Nov. 19.

“The UN Sustainable Development Solutions Network, which I direct … prepares a number of indexes each year for the sustainable development goals, for happiness, using survey data. We have many indexes and indicators on child well-being that can be contributors … the indicators will give us real information that can be brought to bear by government and policymakers,” he told the participants in the online discussion entitled “Perfecting Joy: three proposals to let life flourish.”

The Economy of Francesco, sponsored by the Vatican Dicastery for Promoting Integral Development, is a virtual event taking place Nov. 19-21 that aims to form 2,000 young economists and entrepreneurs to “build a more just, fraternal, inclusive and sustainable economy today and in the future.”

Sachs, an American economist, Ivy League professor, and UN adviser, has been a frequent contributor to the Vatican’s social science conferences in recent years. He has been a featured speaker in at least six Vatican conferences in 2019-2020, lecturing on topics from education to ethics.

He also participated in the Synod of Bishops for the Pan-Amazonian region in Oct. 2019, where he addressed the synod “regarding the grave danger of environmental devastation of the Amazon, including deforestation and massive forest fires,” Sachs told CNA in an interview earlier this year.

Sachs has been a long-time advocate for reducing fertility rates in developing countries through widespread dissemination of contraception, a view antithetical to Catholic social teaching and the Church’s position in current global discussions of economic development and environmental stewardship.

In February, CNA asked Bishop Marcelo Sánchez Sorondo, chancellor of the Pontifical Academy of Social Sciences, why the academy had featured Sachs with such frequency at Vatican conferences.

“Because he integrates the magisterium of the Church and of Pope Francis into economics by putting the human person and the common good at the center,” the bishop said.

Sachs has written that one “key to sustainable development” is the “stabilization of the global population” through “the reduction of fertility rates.”

“The reduction of fertility rates should be encouraged in the poorer countries as well. Rapid and wholly voluntary reductions of fertility have been and can be achieved in poor countries. Success at reducing high fertility rates depends on keeping girls in school, ensuring that children survive, and providing access to modern family planning and contraceptives,” he wrote in a CNN op-ed in 2011.

When asked about this statement by Sachs and the concerns raised by some Catholics, Sorondo responded that Sachs said this in 2011.

“Now he has changed,” the Argentine bishop commented.

But in October 2019, Sachs again spoke publicly of a goal to “reduce fertility rates.”

Nor has the economist distanced himself from his 2006 article in the Scientific American, “Lower Fertility: a Wise Investment,” where he wrote: “Reducing fertility rates in the poorest countries would also be among the smartest investments that the rich countries could make today for their own future well-being.”

CNA asked Sachs in February how his advocacy for reducing fertility rates and contraception squared with Pope Francis’ sense of “integral human ecology,” and whether he believed it was right for people in the developed world to advocate lifestyle choices to those in the developing world.

Sachs said that he strongly agreed with “Pope Francis’s support for ‘responsible parenthood’ as also enunciated by Pope St. Paul VI. This idea means that families, that is mothers and fathers together, should take a rational decision on having children based on their circumstances with focus of securing their flourishing,” he said.

“Access to abortion is a choice left to each nation. The Sustainable Development Goals and Agenda 2030 [a list of 17 global goals to be completed by 2030] do not mention abortion or promote abortion,” Sachs told CNA.

In fact, Sustainable Development Goal 5.6 is: “Ensure universal access to sexual and reproductive health and reproductive rights as agreed in accordance with the Programme of Action of the International Conference on Population and Development and the Beijing Platform for Action and the outcome documents of their review conferences.”

The UN describes its indicator for progress towards this goal as the “number of countries with laws and regulations that guarantee women aged 15-49 years access to sexual and reproductive health care, information and education.”

Sachs serves as director of the UN Sustainable Development Solutions Network. He told CNA that he “did not take notice” of the Holy See’s decision not to participate in the Nairobi Summit sponsored by the UN Population Fund in November 2019.

Pope Francis’ international economic summit, “The Economy of Francesco” — named for the pope’s patron, St. Francis of Assisi — was originally planned to take place in Assisi in March. Because of the coronavirus pandemic, the summit was postponed to Nov. 19-21 and then made into a virtual event.

The summit seeks to equip “change-makers” to explore alternatives to the current global economic system that would be more beneficial for the poor and the environment.

Sachs told CNA earlier this year that he would use role as a mentor to “emphasize the great beauty and wisdom of the Church’s social teachings, and of St. Francis’ teachings and actions, in guiding us to the integral development we seek.”

In a promotional video for the “Economy of Francesco,” he said that the “work in Assisi will be world-changing” and would help to “create a new world economy that is fair, prosperous, and environmentally sustainable.”

“It is a thrill to be a part of the change that is underway that is going to produce happiness throughout the world,” he said.

The livestream of the Economy of Francesco event began with a live guitar performance by Nyado, billed as an “international impact entertainment collective,” in which the young artists sang lines from a song by Danish singer-songwriter Tina Dico: “You’ve got no one to follow, and no one will follow you. Ain’t that a relief?”

The Economy of Francesco is organized by the Diocese of Assisi, the Serafico Institute, the Municipality of Assisi and “Economia di Comunione,” with the support, on behalf of the Holy See, of the Dicastery for Promoting Integral Human Development, which is sponsoring the initiative.

Pope Francis is due to address the summit via video message on Nov. 21.