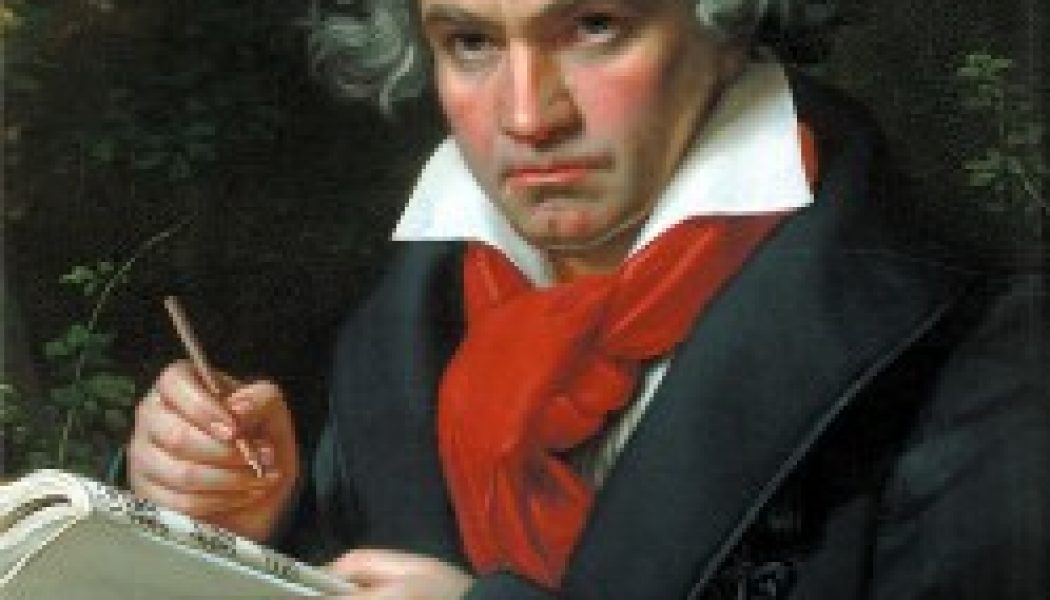 Can an unbeliever, a denier of the faith, produce such music as Beethoven did in his Missa Solemnis?

It has long been fashionable in music history textbooks to speak of Beethoven’s Missa Solemnis as a purely artistic statement that, to be blunt, uses the texts of the Catholic Mass as a convenient springboard for musical experimentation and an idiosyncratic expression of a wholly subjective faith.

That Beethoven was not, in every respect, a practicing orthodox Catholic is probably, at this point in time, indisputable. Nevertheless, do we not discern in his music, as in many of his spoken or written comments, a profound Catholic mysticism? No unbeliever, no denier of the faith, could produce such music. Listen to the work of an urbane atheist, Fauré’s Requiem. It is magnificent in architecture, achingly beautiful in its melodies and harmonies. But it has all the subtle worldliness of a French salon. Listen, in contrast, to Duruflé’s Requiem. While it shares some of those romantic aesthetic traits, it belongs to an entirely different plane of being and living. And so, I would argue, does Beethoven’s Mass.

A commentator in his notes on the Missa Solemnis interprets the rapid-fire enunciation of articles of the Creed as a sign that Beethoven wished to emphasize sheer force of belief, the psychological affirmation “CREDO!,” rather than the orthodoxy of a given set of beliefs. But there is something slightly precipitous about this judgment. Haydn, a man whose lifelong adherence to the Catholic faith no one doubts, does much the same thing in his setting of the Creed in the Missa Sancti Nicolai, Hob. 22:6.

Also, some people have said that the Credo zips through the last part of the creed because Beethoven was not concerned to emphasize particular dogmas but only a blind profession of faith “in all of it,” taken as a kind of romantic blur of belief in the Transcendent. But this too cannot be sustained by a careful listening to the movement. Beethoven devotes exquisite attention to the central articles of the faith—the Incarnation, the Passion, the Resurrection, bringing out the character of each in very different and decisive sections—and subsumes the rest of the creed under these mysteries, which are, in fact, the causes of the other mysteries. The Church is the extension in time of the Incarnation; the forgiveness of sins is implied in the Passion; the resurrection of the body is contained, in promise, within the resurrection of Christ. From this angle, the repetitions of the word ‘credo’ seem rather to be the joyful eruption of a thankful faith, the ecstatic affirmations of a heart overflowing with love—a constantly renewed acknowledgment that all these mysteries, which are so many mercies to mankind, have been made possible by the great revelation of God’s Love, encapsulated in the central truths of the Faith.

Then there is the “problem” of the Benedictus, which serves as counterbalance to the Praeludium. I think we are glimpsing here the contrast of the unbloody renewal of Calvary’s bloody sacrifice with the spiritual fruits of peace, consolation, and mercy it brings. The silence of the Roman Canon at this point in the Mass, the intimacy of the death of Christ which is the paradoxical consummation of his nuptial union with the Church, suggests a clue as to why Beethoven placed the most hushed and lyrical music of the work at precisely this liturgical point. Although the Mass was not designed for liturgical use—at any rate, by the time Beethoven finished it, it had become a personal testimony of faith and fine art, like Bach’s Mass in B Minor—we must always bear in mind the liturgical context that would never have been absent from Beethoven’s mind, as for any Catholic composer living in a thoroughly Catholic culture.

There is, of course, when all is said and done, the undying freshness, ever-surprising novelty, and truly exquisite pathos of Beethoven’s music. I remember a concert in Washington, D.C., in which Sir Neville Mariner splendidly conducted Beethoven’s Seventh, and I was given the grace to hear it as if it had just emerged from the composer’s mind. What elation, what shock, what magic there must have been in the ears of those who first listened to his music! To the man living in the early nineteenth century, Beethoven must have come across the way Arvo Pärt does to me today: music wondrous, captivating, revolutionary, hitherto inconceivable.

Beethoven’s Missa Solemnis is not my favorite setting of the Mass texts by a long shot (the palm, in my book, would go either to Palestrina’s Missa Papae Marcelli, Byrd’s Mass for Four Voices, Bruckner’s Mass No. 2, or Pärt’s Berliner Messe), but it has always remained, for me, a fascinating amalgamation of humanism and simple faith, an intricate microcosm and elevated expression of the peculiar genius of this revolutionary composer.

Once, when listening to the Missa Solemnis, I noticed that its number in Beethoven’s catalog, Opus 123, corresponds to the locus of the Five Ways of Saint Thomas, 1.2.3 (that is, the first part, second question, third article). Moreover, Beethoven assigns to the work as a whole the key of D Major―D for DEUS, to whom the work as a whole is expressly directed, since it is a prayer from beginning to end, an idealized accompaniment to the Holy Sacrifice of the Mass in which perfect worship is given to the Father by the Son. Thus, a mystical correspondence is obtained between the five movements and the five arguments.

1. The Kyrie and its manifold echoes are like the First Way’s tracing back of effects of motion to their distant and less perceptible causes, and thence to the very first, the Unmoved Mover. The soloists represent the higher and more powerful causes, the chorus the lower and more evident.

2. The Gloria, with its great power and forcefulness, is a dramatic image of efficient causality as such, to which the Second Way is devoted. The powerful fugues and fugal sections are like the levels or layers of causality, one on top of the other, all based upon and testifying to a primal idea or motive (“motif”) that gives them the power to harmonize or cooperate towards a common end.

3. The Credo has often been considered a brash exhibition of Beethoven’s anti-doctrinal pietism, since the articles of the creed are set in rather hurried phrases while the word “Credo” is repeated again and again, as if to say: “Don’t bother too much about the details, the crucial thing is just to believe―believe in something divine, that’s the crux of it.” But one might read the movement differently. The very basis of the truth of all the articles of faith is God’s own nature, His authority, His unspeakable power. And this is precisely the object of our “credo”: I believe that God is God, that He is who He says He is, that He can do all things. In this way, the setting of the Credo highlights the relationship between divine necessity and the mere possibility of all other things that flow from His sovereignly free will, made known to us only by a revelation to which we confidently reply: Credo. In this, one glimpses a correspondence between the Credo and the Third Way.

4. The Sanctus, with its angelic and lofty tone, gestures towards the “Platonic” Fourth Way, the way of manifesting God’s existence from the beauty, nobility, goodness, or any perfection found in things―yet found in them by being caused in them, since creatures are not competent to endow themselves with these perfections. Creatures, having been given the fundamental perfection of being, work to build up still other perfections, but inasmuch as the creature, qua creature, is in potency, the actuality it possesses must be ultimately derived from a source that is potential in no way and altogether actual. The song of the heavenly host, as Beethoven reproduces it, captures this downpour of perfections from their celestial font.

5. The Agnus Dei is suggestive of the argument from divine governance. The tragic tone with which this movement begins and the triumphant glorious conclusion reminds us of the mystery of God’s rulership over the universe, which permits evil (hence the peccata, and the consequent miserere nobis) in order to draw forth a greater good, often in ways we cannot see or ever do see in this life (dona nobis pacem). The rich, intricate, and intertwining harmonies of this movement, and its continual dialoguing between soloists and chorus, are, in their own way, a sensible image of the hierarchical structure of the cosmos, where lower and higher are mutually related for the good of each, where the one and the many are reconciled in the service of charity, and where all things by their very nature strive for the good.

One final note on the Credo of the Missa Solemnis. How could anyone who listens to the “Crucifixus” or the “Passus et sepultus,” or the resplendent “Resurrexit”―all the more forceful from its homophonic brevity―ever think that Beethoven was not a believer? Perhaps he was no orthodox Catholic, but the Catholic faith—its creed, its sacraments—was deep in his bones; it shapes every phrase of this great work. The lengthy final section of the Credo, from “Resurrexit” onwards, is a testimony of faith in the accomplishments of the crucified Christ whom Beethoven lovingly contemplates in the middle section. It is through the death of Christ that the contrapuntal credos of the final section, expressing the constant exercise of the virtue of faith, are made possible.

Republished with gracious permission from Views from the Choir Loft (May 2013, February 2014).

This essay was first published here in December 2016. It is part of series commemorating the 250th anniversary of the birth of Ludwig van Beethoven.

The featured image is a “Portrait of Ludwig van Beethoven when composing the Missa Solemnis” (1820) by Karl Joseph Stieler. It is in the public domain and appears here courtesy of Wikimedia Commons.