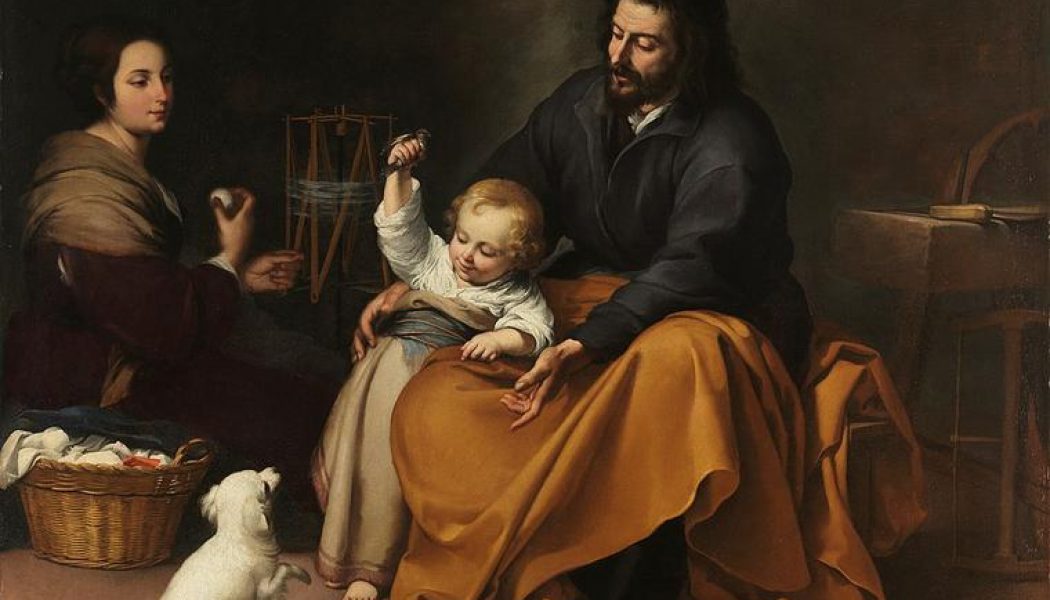 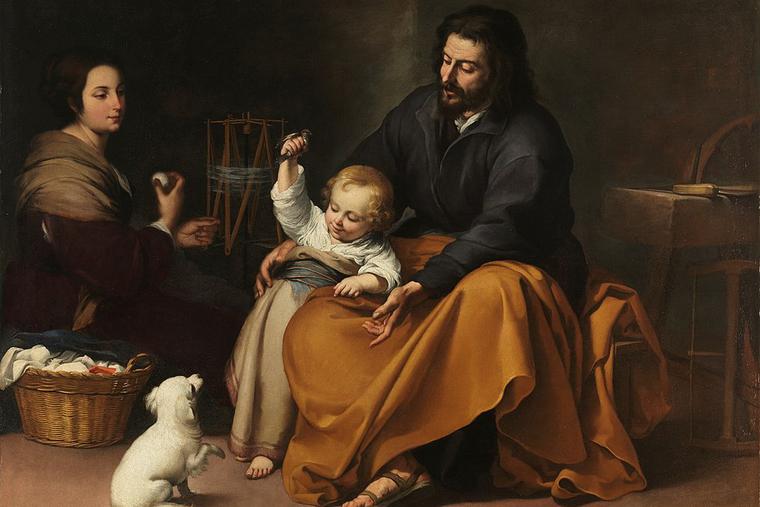 Was St. Joseph old or young? A widower who served more as a guardian for the virginity of the Blessed Virgin Mary, or a young, virile husband, who loved her with a virginal love?

Such questions are ancient, but have come to the fore during this Year of St. Joseph as study of the saint grows. Most devotional materials today present Joseph as a young man who lived a real, but virginal, marriage with Mary.

As we draw close to the feast of St. Joseph the Worker (May 1), it is noteworthy that the usual arguments for Joseph being young are not related to his capacity to work, but rather the desire for a saint who lived chastity. It is thought that an old Joseph would have found chastity insufficiently challenging to live. That likely says more about our preoccupations than it does about St. Joseph.

I find the arguments for the young Joseph more pleasing, and likely favoring a piety more suitable today for young men, married couples and families. At the same time, we should not dismiss how the Church has thought and prayed for the greater part of her history.

The testimony of Christian art — which is a valid witness to the faith of the Church — has long portrayed Joseph as an old(er) man. Indeed, it is only relatively recently that we find sacred art of Joseph as a young man.

More important than the testimony of art is that of liturgy. While the Western (Latin) liturgy is silent on Joseph’s age, the Eastern tradition presents him as an old(er) man.

For example, at Vespers for the first Sunday after Christmas, the feast day assigned to St. Joseph, the Ukrainian Greco-Catholic Church prays, “In his advanced years, Joseph clearly saw the prophecies fulfilled.”

Father Peter Galadza, professor emeritus at the Metropolitan Andrey Sheptytsky Institute of Eastern Christian Studies in Toronto, notes that paraliturgical hymns (carols or “koliady”) composed during the last several centuries by Ukrainians refer to Joseph as an old man. These hymns are sung to the present day.

While one might prefer a young Joseph, the larger tradition of the Church — in terms of history and cultural breadth — should not be treated dismissively.

The Bible tells us precious little about Joseph’s biography, aside from his lineage and that he was a “just man.” Thus he could be an old man who never married before Mary, a widower with other children by his late wife, or a young man who loved Mary and was willing to live a virginal marriage with her.

The source material for the tradition of Joseph as an older man, a widower with other children (thus the legal, or presumed, half-brothers of Jesus) is the Proto-Evangelium of James. This book was honored by many early Christians as biblical, giving much of the story of the life of Mary, her infancy and her marriage to Joseph.

According to the Proto-Evangelium of James, Mary was presented to live in the Temple at the age of 3. When she came of age and could no longer live in the Temple — women were considered ritually defiled during menstruation — a guardian was sought for her. She would remain a virgin consecrated to the Lord, but would have a husband as a guardian to provide a home for her. Joseph, a widower presumably no longer desirous of the conjugal dimension of marriage, was chosen for this mission.

Here is how the Proto-Evangelium of James records it:

And the priest said to Joseph, “You have been chosen by lot to take into your keeping the virgin of the Lord.”

“I have children, and I am an old man, and she is a young girl. I am afraid lest I become a laughing-stock to the sons of Israel.”

And the priest said to Joseph:

“Fear the Lord your God, and remember what the Lord did to Dathan, and Abiram, and Korah; (Numbers 16:31-33) how the earth opened, and they were swallowed up on account of their contradiction. And now fear, O Joseph, lest the same things happen in your house.”

And Joseph was afraid, and took her into his keeping. And Joseph said to Mary:

“Behold, I have received you from the temple of the Lord; and now I leave you in my house, and go away to build my buildings, and I shall come to you. The Lord will protect you.”

It was when Joseph was away that the Annunciation took place.

The Proto-Evangelium of James was not included in the canon of Scripture; it is not part of the Bible. We might find a hint of why in the passage above. There the priest tells Joseph to be afraid; in the canonical Gospels (Matthew and Luke) the angel tells Joseph not to be afraid.

In any case, the great doctor of the Bible, St. Jerome, moved the Church away from the Proto-Evangelium of James and it holds no authority in the Church today.

Nevertheless, the Latin-rite feast of the Presentation of Mary (Nov. 21) demonstrates that the Proto-Evangelium of James has shaped the Church’s faith and liturgy. Indeed, the extra-canonical text is source for much well-loved Marian piety.

The Priority of Chastity

Much of the reasoning in favor of Joseph as young man goes as follows: We need models of chastity at a time when chastity is a difficult virtue for young people to live, when even the word virginity has a negative cultural connotation.

That is certainly a respectable position, and the one finds liturgical support Joseph as virginal bridegroom. The Latin rite speaks of Mary “united to Joseph, the just man, by a bond of marital and virginal love” (Preface for the Votive Mass of Holy Mary of Nazareth). Pope St. John Paul II quotes that in his apostolic letter on St. Joseph, Guardian of the Redeemer (Redemptoris Custos) of 1989:

There are really two kinds of love here, both of which together represent the mystery of the Church — virgin and spouse — as symbolized in the marriage of Mary and Joseph. “Virginity or celibacy for the sake of the Kingdom of God not only does not contradict the dignity of marriage but presupposes and confirms it. Marriage and virginity are two ways of expressing and living the one mystery of the Covenant of God with his people,” the Covenant which is a communion of love between God and human beings (20).

Certainly that can be read as favoring Joseph as a young virgin alongside his young virgin bride, even if the magisterium does not definitively pronounce upon Joseph’s age or the possibility of a previous marriage.

I do favor the young Joseph partly because young people find him a more compelling witness in that guise, especially at a time when chastity is a more prominent virtue than it would otherwise be in a healthy culture.

At the same time, we ought to remember that Joseph’s marriage to Mary was entirely unique. Free from original sin, and thus concupiscence, Mary lived the virtues in a way unlike any other wife in history. Regardless of Joseph’s age, living the virtue of chastity was much easier for him than for any other man, precisely because he lived with sinless Mary and had the perfect model of virtue in his home.

That was the pithy view of the late Mother Angelica, made more widely known by Marian Father Donald Calloway in his very popular book, Consecration to St. Joseph, which has helped so many deepen their devotion to him.

Feeble men don’t walk very far, but old does not mean feeble. (Mother Angelica knew that better than most!)

In the biblical period everyone walked everywhere. In the Pentateuch, very old men completed very onerous tasks, like building an ark to save the world. Moses was 80 when he returned to Egypt — walking. Then he walked out again.

By the time of the Gospels, when the extraordinary lifespans of the Pentateuch no longer prevailed, people of all generations regularly walked all over the land of Israel, as we see in the annual pilgrimages the Holy Family made to Jerusalem. As for walking to Egypt, the region of Gaza (part of Egypt) is closer to Jerusalem than Nazareth is. It is possible that the flight into Egypt was a shorter trip than it was from Nazareth to Bethlehem.

All of which does not prove that Joseph was old or young; just that he was not enfeebled and that he could walk long distances — as a great many people did in those days.

In an age obsessed with (often disordered) sexual pleasure, the figure of a young, virginal Joseph is more attractive. Our culture is also obsessed with work — even retired people like to boast about how busy they are!

Given that we think we know how to work, we don’t think we need a patron of working. Perhaps in the future when technology makes it possible to spend even more time than we do now in recreation, the figure of the worker will be more needed. Then we will argue that Joseph was young because he was a worker, not a retired old man!