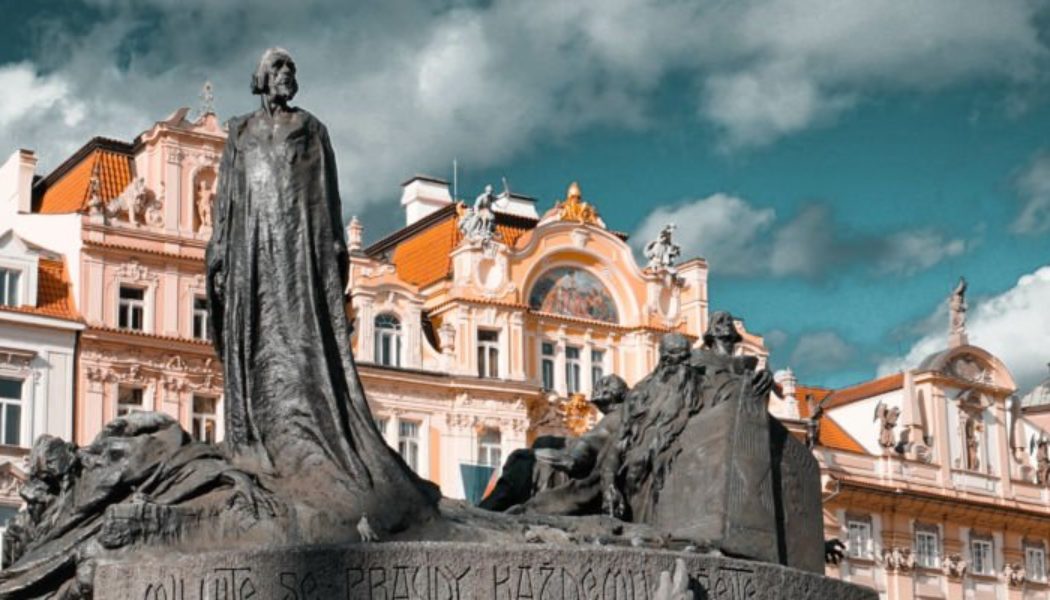 The proto-Protestants were heretics in the fourteenth and fifteenth centuries whose teachings and actions laid the groundwork for Martin Luther, John Calvin, and other sixteenth-century Reformers. They advocated the later bedrock Protestant principle of sola scriptura, or the belief that the only authoritative source of God’s divine revelation is Sacred Scripture. These proto-Protestants also called for the reform of Church abuses and advanced various heretical opinions in an effort to undermine the Church. The two main proto-Protestants were John Wycliffe (1324-1384) and Jan Hus (1369-1415).

John Wycliffe was born in Yorkshire, England and studied at Oxford, where he was recognized as a brilliant student. He became a professor of philosophy and theology at his alma mater. Wycliffe was a pure academic—an intellectual man who did not motivate or lead. He provided the ideas and let others perform the actions.

At Oxford, Wycliffe advocated several heretical teachings in lectures and books. In terms of fundamental Catholic doctrines, he attacked the eucharistic doctrine of transubstantiation. In his book On the Eucharist, he denied the occurrence of transubstantiation and advocated that, instead, the bread and wine remain present after the prayer of consecration. He opined that the real presence of Jesus in the Eucharist is not a real flesh-and-blood presence, but is symbolic. Wycliffe also condemned the veneration of the saints, indulgences, and prayers for the dead.

Heresy is extremely difficult to eradicate, and despite the condemnation of the Church, it can persist and reappear in later centuries. In addition to the above, Wycliffe proved the resiliency of heresy by advocating Donatism, originally a fourth-century heresy that advocated that the validity of a sacrament relies on the worthiness of the minister. According to the Donatists—and to Wycliffe—bishops or priests in a state of mortal sin cannot effect the sacraments.

Wycliffe’s original contributions to heresy mostly involved erroneous teachings concerning the Church. He defined the Church as an “invisible transcendent society” that is neither hierarchically structured nor united to the bishop of Rome, but rather is present in all the people of Christ. Moreover, he attacked the papacy and referred to the pope as “the man of sin” and “Lucifer’s member.” Wycliffe believed that the state holds supremacy over the Church and advocated for the confiscation of Church property. He also taught that the Bible is the only authoritative source of God’s divine revelation (sola scriptura). Finally, he denied the existence of free will, opining that man is completely subject to the will of God. The Church did not ignore Wycliffe’s heretical teachings; the archbishop of Canterbury censured him in 1377.

Wycliffe gained popularity because he attacked ecclesiastical abuses and exploited latent nationalist anger at the papacy in the midst of its sojourn in Avignon. Groups of Wycliffe followers, known as the poor priests and later as Lollards, traveled throughout England preaching his heresy. Two of his followers undertook a new translation of Scripture into English, which the Church condemned—not because it was in the vernacular (multiple English editions of the Bible existed well before Wycliffe; see Where We Got the Bible by Henry Graham, chapter 11, “Vernacular Scriptures Before Wycliff”), but because the translation was rife with error.

Wycliffe’s sovereign, King Richard II of England, married Princess Anne of Bohemia in 1382. As a result of the union, cultural and educational exchanges occurred between the two nations. Bohemian students came to Oxford to study, where they encountered the teachings of John Wycliffe. They brought these heretical teachings to Prague, where the priest, teacher, and popular preacher Jan Hus embraced and expounded upon them. Like Wycliffe, Hus began preaching against corruption in the Church and ecclesial abuses.

There were significant problems in the Church in Bohemia at the time. Clerical immorality was rampant, and there was widespread resentment against the Church, which owned nearly fifty percent of all land in the kingdom. These issues along with the presence of a heavy anti-German nationalist sentiment (the kingdom was part of the German-based Holy Roman Empire) produced a rich environment for reformers and heretics.

Jan Hus studied philosophy and theology at the University of Prague, where he was appointed a professor in 1398. He rose through the university administration and became rector in 1402. He was a popular and commanding preacher. Adopting most of Wycliffe’s teachings, Hus challenged Catholic doctrine on papal authority, advocated sola scriptura, and denied Sacred Tradition as an element of the Deposit of Faith. He also condemned the veneration of the saints and the granting of indulgences. Like Wycliffe, he viewed the hierarchy of the Church as ministers of Satan and denied the universal jurisdiction and primacy of the pope. Hus believed that the Church was built on the personal faith of St. Peter and that Jesus did not institute the Petrine Office.

The University of Prague condemned Wycliffe’s teachings in 1403, but Hus continued to propagate them. The archbishop of Prague excommunicated him in 1410. Violence erupted in the city, and crowds burned copies of papal bulls. Hus was forced to flee the city in 1412 and stayed in the castle of a friend, where he wrote his heretical work Treatise on the Church.

Toward the end of his life, Martin Luther would bemoan the religious indifference wrought by the movement he began:

Who among us could have foreseen how much misery, corruption, scandal, blasphemy, ingratitude, and wickedness would have resulted from it? Only see how the nobles, the burghers, and the peasants are trampling religion underfoot! I have had no greater or severer subject of assault than my preaching, when the thought arose in me: thou art the sole author of this movement.

But as we can see, Luther was not the sole author of Protestantism, nor did the errors and distortions of the Protestant Reformation start with him or his contemporaries. They had the proto-Protestants to pave the way. There really is nothing new under the sun.

This article is adapted from Catholic Answers’ 20 Answers booklet “The Reformation,” available for purchase in our shop.