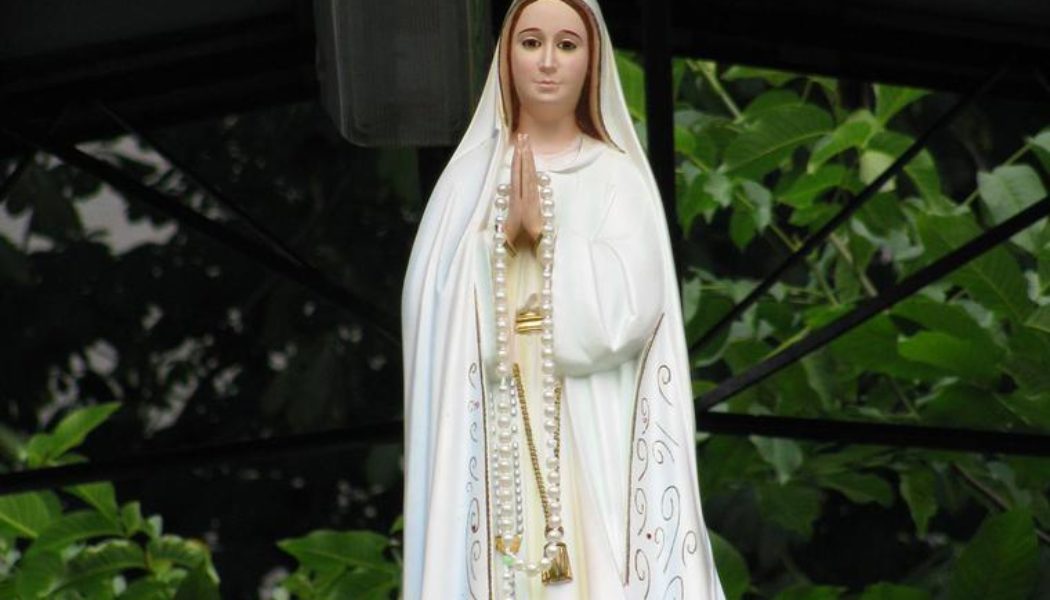 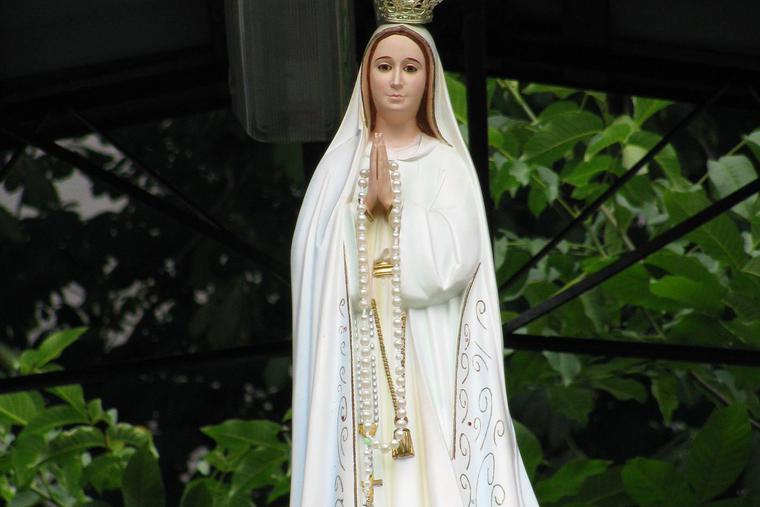 Fittingly, this meeting took place on Sept. 13. Exactly 32 years earlier, Our Lady had appeared to the Fatima children on Sept. 13 and told them:

Continue to pray the Rosary in order to obtain the end of the war. In October Our Lord will come, as well as Our Lady of Dolors and Our Lady of Carmel. St. Joseph will appear with the Child Jesus to bless the world.

Mention Oct. 13, 1917, and the Miracle of the Sun immediately comes to mind. But during that same apparition Our Lady gave us two other major messages. She identified herself as Our Lady of the Rosary, and she also appeared after the miracle as Our Lady of Mount Carmel.

“Our Lady wants all to wear the scapular.” So declared Sister Lúcia to another two Carmelite priests interviewing her on the same subject a year later in 1950 on the feast of the Assumption.

“Can we be sure she (Our Blessed Mother) meant by her appearance dressed as Our Lady of Mount Carmel and holding the scapular that she wanted the scapular as part of the message?” questioned Carmelite Father Howard Rafferty.

“Yes,” Lúcia answered. “Now the Holy Father has already told this to the whole world, saying that the scapular is a sign of consecration to the Immaculate Heart. Nobody can disagree now.”

Indeed, earlier that year Pope Pius XII wrote a letter to the Carmelites for their 7th centenary of the scapular and called the scapular “a sign of their consecration to the Most Sacred Heart of the Immaculate Virgin, a consecration which in recent times we have so strongly recommended.”

Still, Father Rafferty asked yet again, “In giving the conditions of the Fatima Message, is it correct to say that the scapular is one of the conditions?”

He persisted: “Is the wearing of the scapular as important as the saying of the daily Rosary?”

“Yes,” Lúcia affirmed. “The Rosary and the scapular are inseparable. The scapular is a sign of consecration to Our Lady.”

These 1949-1950 interviews were documented by Father Kilian Lynch, the Carmelite prior of Aylesford who also visited with Sister Lúcia in 1950, in his small book, Our Lady of Fatima and the Brown Scapular. It was in Aylesford, England, that Our Lady appeared to St. Simon Stock on July 16, 1251. She gave him the brown scapular for the Carmelites and said:

Take this scapular. It shall be a sign of salvation, a protection in danger and a pledge of peace. Whosoever dies wearing this scapular shall not suffer eternal fire.

Every July 16 we celebrate the feast of Our Lady of Mount Carmel. And every Oct. 13, we recall the Miracle of the Sun and our Lady of Fatima’s continuing directive to say the daily Rosary. Yet even now, 105 years later, is the necessary and unmistakable connection between Our Lady’s scapular and Fatima widely known or followed? It’s surely time to realize the scapular is also a major part of Our Lady’s Fatima message.

As Venerable Pius XII also said, have the brown scapular “be your sign of consecration to the Immaculate Heart of Mary, which we are particularly urging in these perilous times.”

Speaking about the great practices “of devotion to the most Blessed Virgin Mary,” Pope St. Paul VI said, “We judge well to recall especially the Marian Rosary and the religious use of the scapular of Mount Carmel.”

Pius XII wrote of his “own enrolment from boyhood in the Confraternity of this same scapular.”

“I too have worn the scapular of Carmel over my heart for a long time!” exclaimed Pope St. John Paul II in 2001.

When he was shot on the Fatima anniversary of May 13, 1981, he insisted that his brown scapular was not to be removed. Father Mariano Cera reported in a magazine: “Just before the Holy Father was operated on, he told the doctors ‘Don’t take off the scapular.’ And the surgeons left it on.”

John Paul II did not stop there. Writing to the Carmelites in 2001 on the 750th anniversary of the bestowal of the scapular, he stated that “the most genuine form of devotion to the Most Holy Virgin, expressed by the humble sign of the scapular, is the consecration to her Immaculate Heart.” Remember, too, that connected to Fatima more than once Mary said the consecration to her Immaculate Heart was essential.

There are two truths which the sign of the scapular brings out: on the one hand, there is the continuous protection of the Blessed Virgin, not only along the pathways of this life, but also at the moment of passing into the fullness of eternal glory; on the other hand, there is the awareness that devotion toward Our Lady cannot be limited to the occasional prayer in her honor, but must become a ‘habit,’ that is, a permanent way of Christian living, made up of prayer and the interior life, frequent recourse to the sacraments and the concrete exercise of the corporal and spiritual works of mercy.

From these words, we must understand the scapular isn’t a go-to-heaven-free pass. We have do our part too. That surely includes praying the Rosary — Fatima and Carmel again.

Along with the Oct. 13 apparition at Fatima, St. John Paul II’s Fatima-scapular connection is a clear call to either begin or renew our devotion to Our Lady through the brown scapular along with the Rosary right away.

Let’s look at another aspect of the scapular-Fatima-Rosary link. What did a major Fatima bishop think of the scapular connection? Writing a pastoral letter for July 13, 1951, to commemorate the 7th centenary of Our Lady giving the scapular to St. Simon Stock, Bishop José Alves Correia da Silva, the bishop of Leiria who was closely connected to Sister Lúcia and who ordered her to write her memoirs, said:

At Fatima, Our Lady requested the seers to spread devotion to the scapular. … Among the many privileges and annexed to this devotion is the singular promise of the Blessed Virgin to free from eternal fire all who wear the scapular and fulfil its obligations.

It goes without saying that our motive in wearing the scapular must not be pride or superstition, what is sincere and firm hope that the Blessed Virgin will grant us the grace of conversion and of final perseverance.

Fatima, therefore, is a striking confirmation in of the ancient piety the Rosary and the scapular of our Lady, both of which go back to the ages of faith, when love for her permeated the hold of life and all found the beauty of life in her.

The Church is on board with this. The Vatican’s Directory on Popular Piety and the Liturgy also has very clear teachings on the brown scapular:

The scapular is an external sign of the filial relationship established between the Blessed Virgin Mary, Mother and Queen of Mount Carmel, and the faithful who entrust themselves totally to her protection, who have recourse to her maternal intercession, who are mindful of the primacy of the spiritual life and the need for prayer.

The directory also notes, “Its use is truly universal and, undoubtedly, it is one of those pious practices which the Council described as ‘recommended by the Magisterium throughout the centuries.”

Pope St. John Paul II, who lovingly promoted the Rosary and even added the Luminous Mysteries, eloquently explained how “the sign of the scapular points to an effective synthesis of Marian spirituality, which nourishes the devotion of believers and makes them sensitive to the Virgin Mother’s loving presence in their lives.”

Half a century earlier in his letter, Ven. Pius XII also had this to say:

Christ is the way; Mary reflects the way; her scapular is our keepsake on the way. … For the holy scapular, which may be called the habit or garment of Mary, is a sign and a pledge of the protection of the Mother of God.”

There surely appears to be a connection in the promises our Blessed Mother made for wearing the scapular and at a different time for praying the Rosary.

“Take this scapular, it shall be a sign of salvation, a protection in danger and a pledge of peace. Whosoever dies wearing this scapular shall not suffer eternal fire,” Our Lady told St. Simon Stock when she gave him the scapular.

“Jesus wishes to establish devotion to my Immaculate Heart in the world. I promise salvation to those who embrace it,” Our Lady of the Rosary told the Fatima seers in her June 13 apparition.

“The soul that recommends itself to me by the recitation of the Rosary shall not perish,” Our Lady said among the 15 promises she made concerning praying the Rosary. Another is, “I promise my special protection and the greatest graces to all those who shall recite the Rosary.”

Then there are the purgatory promises. (See the three requirements.) Check above again at what both John Paul II and Bishop da Silva said. Pius XII reminded of the one concerning wearing the scapular:

And certainly this gentle Mother will not delay to open as soon as possible, through her intercession with God, the gates of Heaven for her children who are expiating their faults in purgatory — a trust based on that promise known as the Sabbatine Privilege.

Similarly, for one of the 15 promises for praying the Rosary, Our Blessed Mother also said:

I shall deliver from purgatory those who have been devoted to the Rosary.

How can we pass up these similar promises that our Blessed Mother made concerning the devotion to her scapular and to the Rosary?

Expert hosting reviews and advice. The suggestion of action you should take every day to constantly generate sales and income. However, the concept of buying and renting has been made easier with the advent of the internet.