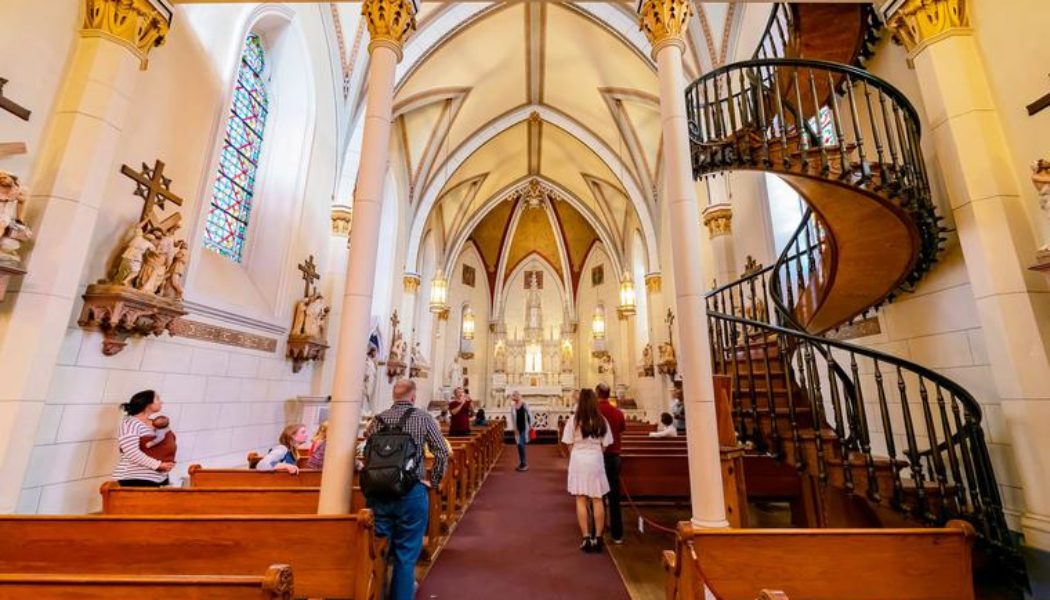 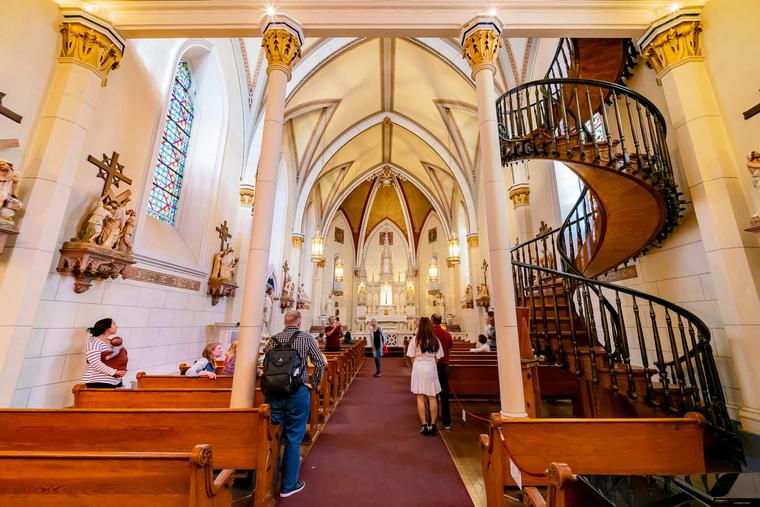 It is believed that there exists a staircase in Santa Fe, New Mexico, that St. Joseph built. Since I read about it as a young child, I have always wanted to see the famous staircase, and I was finally blessed with my chance on a recent road trip.

My father was a gifted carpenter, and I was fascinated by his projects growing up. If my dad needed something — a storage compartment for his boat, a home sauna or a ramp for his wheelchair — he didn’t buy it. He built it. Growing up, I used to love going to the lumber yard with my dad to pick out wood, stain and nails for his projects. I was mesmerized watching Dad turn raw materials into beautiful, finished products. Perhaps that is what initially spurred my interest in the staircase. And though I thought about my Dad as I admired the stairs, I knew that he never built anything like this.

In his book Loretto Chapel: The Miraculous Staircase, Bill Brokaw illustrates the history behind the famous staircase and how it came to be. In 1873, a teaching order for girls called the Sisters of Loretto raised $30,000 for a chapel to be built to serve their order and the hundreds of girls at their school. It was a massive project that involved a father-and-son architectural team from France, many skilled local workers and expert craftsmen from Europe. The sisters also had another helper: they had sought the patronage of St. Joseph in the chapel’s construction.

After several years, the chapel’s construction was coming along quite well, except for one glaring problem: there was no staircase to the choir loft. Brokaw explains that European chapels at that time often had no staircases but relied on ladders. And while this may not pose a problem for exclusively male choirs, Brokaw notes that such a system “would be terrifying to the sisters, who wore habits and to the girls who wore long dresses below the tops of their shoes.”

One by one, the craftsmen advised that a suitable 22-foot staircase could not be built without taking up plenty of room below. So the sisters and the students offered a nine-day novena to St. Joseph. After all, when it came to carpentry, whom better to ask? On the final day of the novena, an old man arrived with a donkey and a few tools, promising he could build a proper staircase for the chapel. After about eight months, it was complete. And it was glorious.

Rather than build a traditional staircase, the carpenter made a 33-step double spiral staircase that occupied very little space on the first floor. But with no center pole for support, it was not clear to the sisters or the students — or to others — why it didn’t simply fall down. They did not have the opportunity to ask him about the physics because the carpenter was gone when the sisters finally saw the completed stairs. They never saw him again, and he apparently never asked for any payment. Beyond the staircase’s physics, another puzzle exists: the wood used to build the stairs. It is a form of spruce, but no one could identify it precisely.

Some Catholics believe that the actual builder of the staircase was none other than St. Joseph himself.

Of course, when Catholics begin speaking of a miracle, one can expect the obligatory skeptics to come forward.

Numerous sites reference Mary J. Straw Cook’s research from her book Loretto: The Sisters and Their Santa Fe Chapel. Cook cites a short blurb from the Jan. 5, 1895, Santa Fe New Mexican’s “Round About Town” section. It reads, “A letter from Las Cruces to Mr. Quintus Monier, of date yesterday, states that Frank Rochas was found dead at his ranch house near La Luz. … He was a Frenchman, and was favorably known in Santa Fe as an expert worker in wood. He build (error in original) the handsome stair-case in the Loretto chapel …” Cook also notes that a $150 check was written by the sisters in 1881 with the entry: “Paid for wood — Mr. Rochas for N. School.” Some consider these two items, taken together, to be case-cracking pieces of evidence.

As to the first point, perhaps I’ve become jaded by modern “journalism,” but I don’t consider an offhand reference in the gossip section of a newspaper to be terribly reliable. Over the years, many people have claimed that his own father or grandfather built the staircase. Are we to believe them also?

As to the second point, let’s concede that the “Rochas” mentioned in the paper was the same “Rochas” who was paid by the sisters. That would provide evidence that he, like many other craftsmen, had done work for the sisters. But the memo cited by Cook does not read “Wood for Staircase,” or even “Wood for chapel.” Rather, it reads, “wood … for N. School.” (The sisters had commissioned the building of a nearby school.)

Further, the check was written in 1881, three years after the chapel was completed, according to Brokaw’s timeline.

Does this prove that Rochas did not also do work on the chapel or staircase? Nope. But here’s what’s interesting. Cook notes, “Documentation of an earlier payment to carpenter Rochas for construction of the spiral staircase could not be found in the sister’s books.” If we are to believe that Rochas did the work, are we to believe that the sisters forgot or simply refused to pay him? Are we to further believe that, notwithstanding the central importance of the staircase, the sisters never made note of Rochas’ construction of the staircase?

Nevertheless, many people deem this convincing evidence that Rochas built the chapel.

Snopes.com offered its critique of the staircase in 2007. Snopes argues that “the Loretto staircase was apparently not all that fine a piece of work from a safety standpoint” because “the form is not well-suited to bearing weight.” Snopes accidentally makes the precise point that many Catholics make: that physical structure should not bear much weight — yet, it does.

I kept wondering: just how much weight will it bear? We don’t know the answer, but we do know this: it has sustained every weight ever put on it. There would be reason to think the staircase was built for one or two people to use at a time. Yet a photograph taken around Christmas of 1959 illustrates that about 15 young women from the Loretto Academy choir assembled on the stairs to sing.

There’s something else to consider. The original staircase was built without a railing; the railing was added several years after its construction. So the stairs had to support not only its initial construction weight but also a rather heavy railing. (Snopes points out that a metal bracket was added to an outside pole — as though this were the case-cracker to proving the stairs’ un-miraculous nature. I stood right under that little bracket. I might hang a few dress shirts from such a bracket, but I wouldn’t dare attempt a chin-up from it.)

Snopes’ second main argument refers to the wood. They admit that the wood has not been able to be identified. Still, they offer the explanation that, “not a large enough sample has been made available for wood analysts to determine which of the 10 spruce species found in North America (and thus precisely where) it came from.” Is that the problem: not a large enough sample size?

To make its case, Snopes quotes exactly one wood expert: Forrest N. Easley. After I read the Snopes article, I got a little curious about the question of sample size, so I purchased a copy of Easley’s autobiography. Easley explains that he most certainly did have a large enough sample size for analysis. He writes, “When utilizing a powerful microscope, only a very small specimen of wood material is necessary because it is being magnified several hundred times to study the details of the inner structure of the wood cells and their structural relationships.”

But that’s not all. Easley studied the wood for 15 months and concluded that there is no spruce on Earth exactly like it. He even suggested that it was so unique that it should be named “Loretto Spruce.” And although Easley offers a physical theory of why the staircase stands, he concludes, “I am not at all surprised nor do I doubt that this is truly a ‘miraculous’ staircase.”

In our age of disbelief, Easley’s above admission was a brave one — to entertain thoughts of miracles is to open oneself to ridicule. Even some Catholics nowadays feel compelled to reject miracles publicly. Perhaps they think that believing in various miracles makes Catholics look stupid to outsiders. But if that’s your worry, let me calm your fears: much of the modern world already thinks we’re stupid for believing that Jesus performed miracles!

Perhaps we think that the miracle itself has the burden of proof and that we shouldn’t speak up until the miracle has met that weighty burden required by the world. But to suspicious minds, the demanded evidence goes well beyond a reasonable doubt. In their minds, all doubt is considered reasonable. Miracles, by definition, are considered unreasonable.

Years ago, in my college apologetics class, the professor asked us students to prove something fundamental: “Prove your mother loves you.” Each student made a valiant effort, offering various points such as: “She raised me,” “She taught me the Faith,” or “She tells me she loves me.” The professor objected to each, illustrating that each mother’s actions may have been motivated by something other than love. The professor’s point was not that our mothers did not love us. His point was that while some things cannot be proven beyond any possibility of doubt, it is reasonable to believe they are true.

Along with many others on that hot afternoon in New Mexico, I marveled at the stairs of the Loretto Chapel. I watched my wife Lisa say the Stations of the Cross under the stairs. I saw people sitting in the confessional box just under the stairs, pondering the idea that the ascent to Heaven begins with reconciliation. I took a picture of a young couple who had made the journey to see the staircase. I saw people praying, asking for St. Joseph’s intercession in their lives.