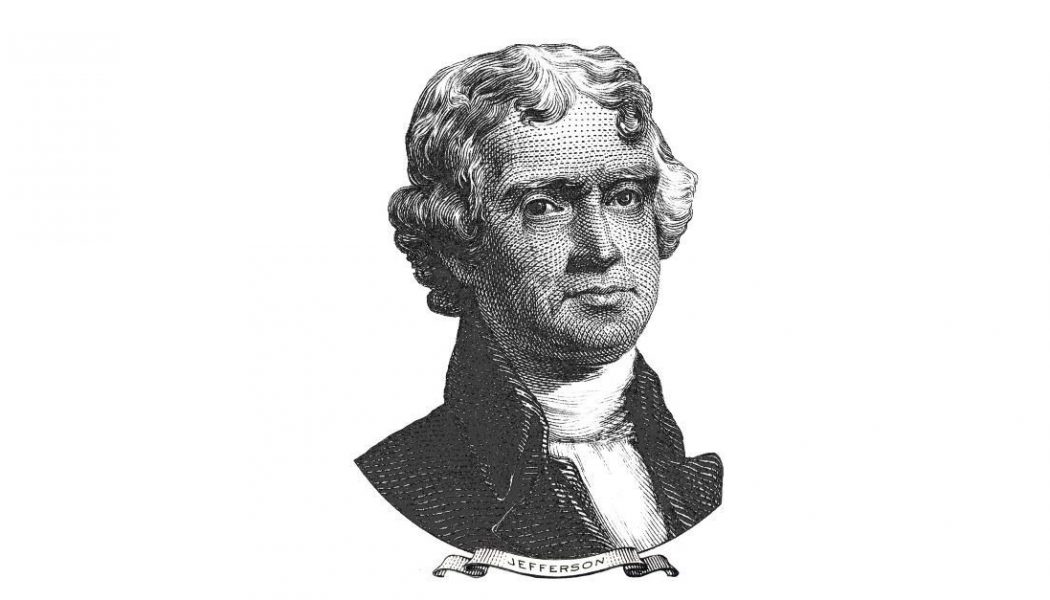 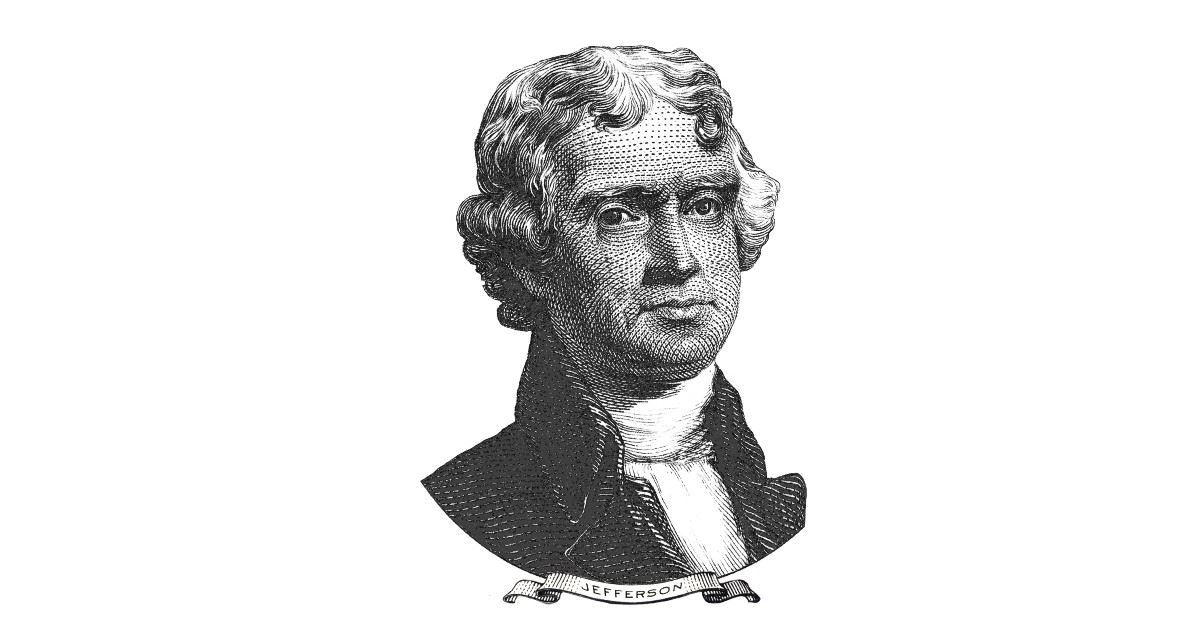 Thomas Jefferson penned the Declaration of Independence, served as the third American president, and is widely considered one of the most influential Founding Fathers of the United States of America.

However, many do not know that Thomas Jefferson also created his own version of the Bible. Taking a penknife, he pored over the biblical text in Greek, Latin, French, and English and cut and pasted passages to create what we call The Jefferson Bible.

So what exactly is Jefferson’s Bible? And is it, in fact, a Bible at all?

Thomas Jefferson in the Age of Enlightenment

Thomas Jefferson was firmly rooted in Enlightenment thought. The Age of Enlightenment, which lasted through most of the 17th and 18th centuries, centered around human reason as the measure of all things.

The Enlightenment brought about revolutions in government, political thought, science, and philosophy, but it also brought traditional Christianity into question. The focus on reason and the human mind, as well as cultural reactions against the checkered history of the European church, threw the supernatural into question.

With a worldview that focused on man’s ability to improve his own self through reason and virtue, many Enlightenment thinkers found it unreasonable and superstitious to believe in miracles and other such supernatural phenomena. Many turned to Deism, a belief system in which God metaphorically “flipped the switch” to get the universe started, then left it to run on its own. Jefferson was one who held to Deism.

The Faith of Thomas Jefferson

Jefferson considered himself a Christian, but he didn’t agree with many of traditional Christianity’s views. In a letter in 1803, he wrote:

“To the corruptions of Christianity I am indeed opposed; but not to the genuine precepts of Jesus himself. I am a Christian, in the only sense he wished any one to be; sincerely attached to his doctrines, in preference to all  others; ascribing to himself every human excellence; & believing he never claimed any other.” (A letter to Benjamin Rush, April 21, 1803, Library of Congress).

Jefferson viewed Jesus as strictly human. He also believed that Jesus Himself ascribed to a more deistic belief system. In another letter to Benjamin Rush, he wrote: “I should proceed to a view of the life, character, & doctrines of Jesus, who sensible of incorrectness of their ideas of the Deity, and of morality, endeavored to bring them to the principles of a pure deism.” ( A letter to Benjamin Rush, April 9, 1803, Library of Congress).

Jefferson viewed Jesus as a great moral teacher but believed that His claims to deity and the stories of His miracles were later agenda-driven additions by Jesus’ followers.

The Jefferson Bible began in 1804, when Jefferson compiled what he called The Philosophy of Jesus of Nazareth, which focused on Jesus’ teachings organized by topic. This 46-page work was lost, and all record of it lies only in Jefferson’s correspondence.

Though this project did not survive, Jefferson put together a more ambitious project that did. The Jefferson Bible, which he called The Life and Morals of Jesus of Nazareth, was an 84-page work finished in 1820 that contained both the moral teachings of Jesus and those passages about Jesus’ life that Jefferson considered reasonable. He made it in four columns with Greek and Latin pasted on one side and French and English on the other.

Of this process, Jefferson wrote, “I made, for my own satisfaction, an Extract from the Evangelists of the texts of his morals, selecting those only whose style and spirit proved them genuine, and his own: and they are as distinguishable from the matter in which they are imbedded as diamonds in dunghills.” (A letter to Francis Adrian Van Der Kemp, April 25, 1816, The National Archives).

So proud was he of this work that he wrote to John Adams that through his paring he had trimmed away “the corruptions of schismatizing followers” (The Life and Morals of Jesus of Nazareth) to arrive at “the most sublime and benevolent code of morals which has ever been offered to man” (letter to John Adams, October 12, 1813, National Archives).

Is the Jefferson Bible biblical?

Jefferson had to be intimately familiar with the Gospels in order to cut and paste them to his preference. However, this does not mean that he had a clear biblical understanding.

From the beginning of the Israelite nation to the end of the Bible, all the intermediate text is sandwiched between these directives from God:

If the Bible is to be considered true, subtracting unwanted passages from the Bible is a serious crime in the eyes of God.

However, Jefferson appears to have thought that the Bible was corrupted, and that Jesus’ followers made up the miracles and deity of Christ. But if Jesus is to be considered a wise man, as Jefferson believed, this leads to absurdity.

All of the Gospels are thought to have been written by the end of the first century, and probably within thirty years of Jesus’ death. Thus, when the Gospels were first written and circulated, hundreds and perhaps thousands of people would still be alive who had seen Jesus speak.

These people would have easily been able to disagree with the writers who wrote that Jesus claimed to be God. But… they didn’t. No one at the time tried to say that Jesus didn’t believe He was God. This claim was, in fact, the reason He was killed (see Matthew 26:63-66). Whether He was actually the Son of God was up for debate in the ancient world, but the fact that He claimed to be so was universally acknowledged.

This leaves Jefferson with a problem. Jesus claimed to be God. Jefferson didn’t believe He was. But Jefferson also believed He was the greatest moral teacher.

“A man who was merely a man and said the sort of things Jesus said would not be a great moral teacher. He would either be a lunatic — on the level with the man who says he is a poached egg — or else he would be the Devil of Hell. You must make your choice. Either this man was, and is, the Son of God, or else a madman or something worse. You can shut him up for a fool, you can spit at him and kill him as a demon or you can fall at his feet and call him Lord and God, but let us not come with any patronizing nonsense about his being a great human teacher. He has not left that open to us. He did not intend to” (Mere Christianity).

The Legacy of the Jefferson Bible

Though Jefferson’s Bible is not widely used today, his cut-and-paste mentality remains strong. It is important to remember that the Bible was never intended to be a buffet to pick and choose the most delectable parts; it was meant to be taken as a whole, or not at all (Deuteronomy 4:2, Ezekiel 3:1-3, Revelation 10:10, Revelation 22:18-19). The Jefferson Bible serves as a reminder of what can happen when we take our own preferences to the extreme: we’re left with no Bible at all.