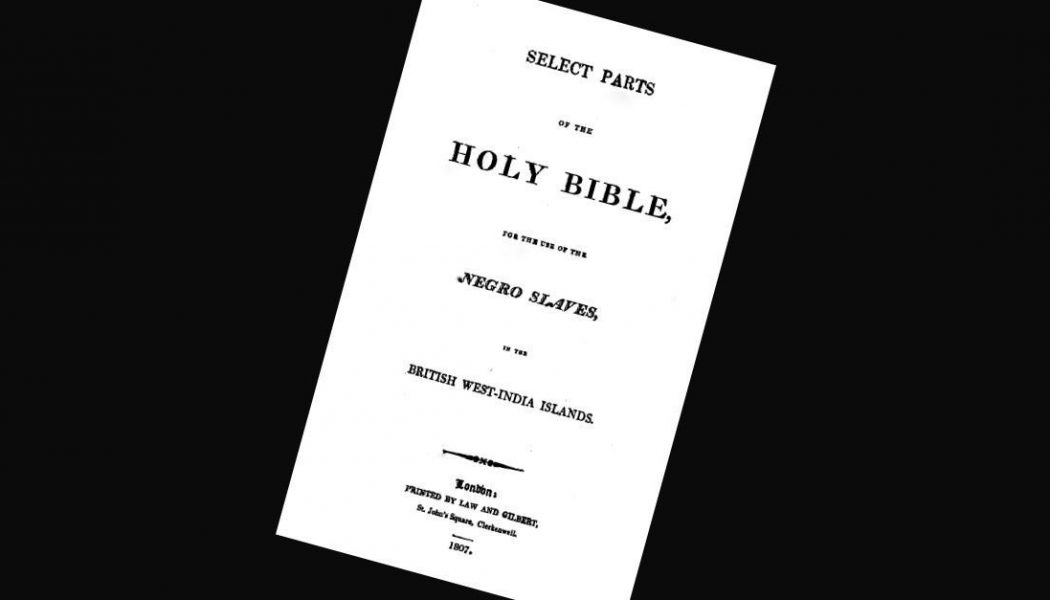 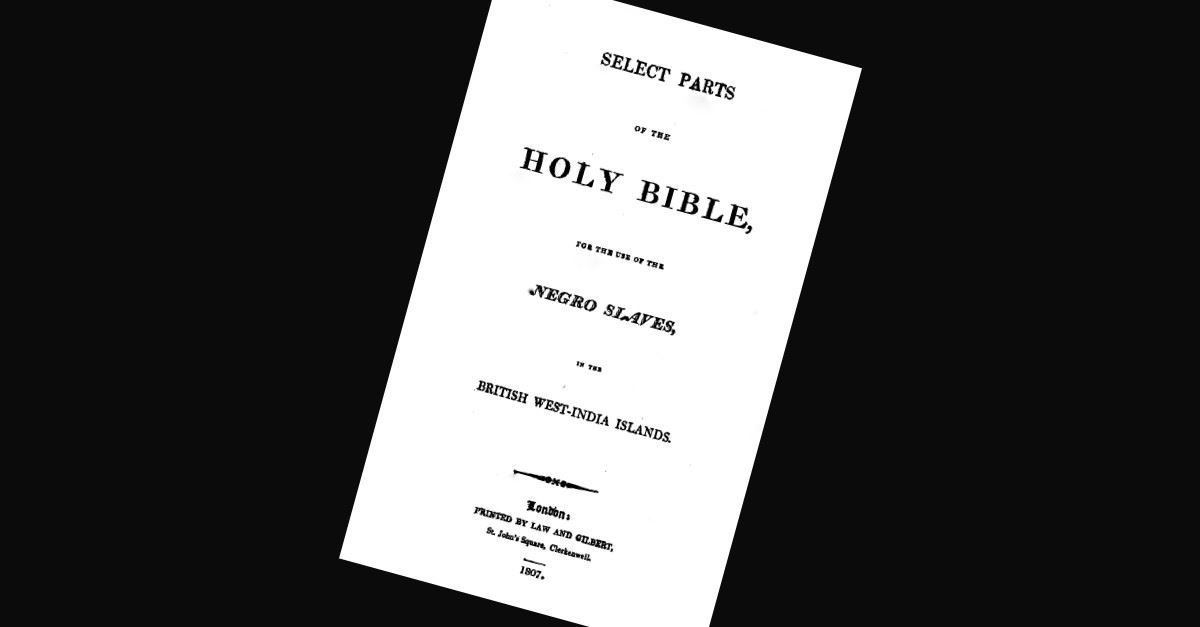 “For freedom Christ has set us free; stand firm therefore, and do not submit again to a yoke of slavery.” (Galatians 5:1)

Plantation owners in the West Indies worried Bible verses such as the one above would incite their African slaves to rebel against bondage. On the other hand, certain passages of Scripture encouraged submission to authority. Rather than withholding the entire Bible, some masters allowed their slaves to have the Slave Bible, which was compiled from selected parts of God’s word to inspire submission.

What is the Slave Bible?

The earliest copy of the Slave Bible was published in 1807, an “astoundingly reduced” Bible which “contains only parts of 14 books,” Brigit Katz reported for SmithsonianMag.com. Sections that were removed included the Exodus story, which showed God instructing Moses to lead the Israelites out of slavery in Egypt.

The account of Joseph’s enslavement, however, remains because his story exemplifies how well-behaved submission is rewarded by God. “The Lord was with Joseph, and he was a successful man; and he was in the house of his master the Egyptian” (Genesis 39:2).

Editors of the Slave Bible were “highlighting themes of being submissive; the same thing goes on with the New Testament as well,” Anthony Schmidt, PhD, Associate Curator of Bible and Religion in America, told CBN News.

Sources do not offer a table of contents for the Slave Bible, but a copy is available for public viewing at the Museum of the Bible in Washington, D.C., which is on loan from Fisk University until September 2019. Two other copies are known to exist in the United Kingdom.

Who made the Slave Bible and why?

The Slave Bible was published in 1807, commissioned “on behalf of the Society for the Conversion of Negro Slaves” for use by missionaries who wanted “to teach enslaved Africans to read, with the ultimate goal of introducing them to Christianity,” according to Katz.

Names of the editors or authors of the Slave Bible are not mentioned. Although their intentions were to evangelize slaves, missionaries had to appease slave owners in the British West-Indies who feared an uprising. This fear was heightened because Haitian slaves overcame their masters only three years earlier during “the only slave revolt in history” in which slaves “successfully drove out their European oppressors to form a new nation,” according to History.com.

Missionaries had to simultaneously respond to the growing abolitionist movement by proving that they had the slaves’ best interests at heart. As they prepared to compile a special Bible for slaves in the West Indies, the missionaries agreed to “uplift materially these Africans” without “teaching them anything that could incite rebellion,” Katz reported.

But it is difficult to completely remove the thread of freedom in Christ woven throughout the Bible.

When Paul was writing much of the New Testament, about “80 percent to 90 percent of the inhabitants of Rome were slaves,” according to Ortlund. Slavery wasn’t based on race in ancient Rome, like it was in the 17th-19th century Western slave trade. Rather, Ortlund said it included foreign prisoners of war and local “men and women who sold themselves into slavery in order to relieve a burdensome debt.”

Most people, hearing or reading his letters when they were first written, were slaves. Yet, Paul’s letters speak to slaves and masters alike: “he expects them to fellowship together in the same church as brothers and sisters in Christ,” Ortlund said.

Peter encourages the Church to “live as free people, but do not use your freedom as a cover-up for evil; live as God’s slaves” (1 Peter 2:16). The Church’s greatest allegiance is to God, and they can glorify Him by “submit[ing] [them]selves for the Lord���s sake to every human authority,” (1 Peter 2:13), including emperors, governors, and even earthly masters.

While many in Paul’s audience were literal slaves, the message of Christ was applicable to all who recognized their bondage to sin and wanted a way out of it. According to God’s Word, not just 80 or 90 percent, but all believers were once slaves to sin (Romans 3:23). And those who are saved by Christ are now slaves to Christ (Romans 1:1, Romans 6:22, 1 Corinthians 7:22).

Everyone is a slave to something. As Justin Buzzard said at Crossway.org:

“If God is not the center of your life, if he does not hold your ultimate allegiance, then you have been enslaved,” but “every slave master except God will fail you.” Worse still, “when you fail, that master can offer no forgiveness, only misery and shame.” Idols become our slave masters, but “that idol that you love [] doesn’t love you back” and “anything you worship and build your life on other than God will suck the life out of you and destroy you.”

In contrast, the Apostles of Jesus taught that Christ “shared in their humanity so that by his death he might break the power of him who holds the power of death—that is, the devil— and free those who all their lives were held in slavery by their fear of death” (Hebrews 2:14-15). Jesus came to serve and save the world (Matthew 20:28). He freed believers from the chains of sin and death, satisfying the requirements of God’s law through His own death and resurrection.

This message was explosive and unsuitable for an excerpted Bible designed to promote submission to one’s earthly master, but it was well-suited to the abolitionist movement which opposed slavery. God’s complete, undistorted message nurtured abolition in the West and would help make the Slave Bible obsolete.

Oppression of one person by another for personal gain was never part of God’s original plan. When viewing the Bible in its entirety, one understands the true meaning of slavery and servanthood as God portrays it, not as demonstrated in the Slave Bible.

Heart eternity ring. Information technology strategic plan – how to build one. What rights you have over your data.