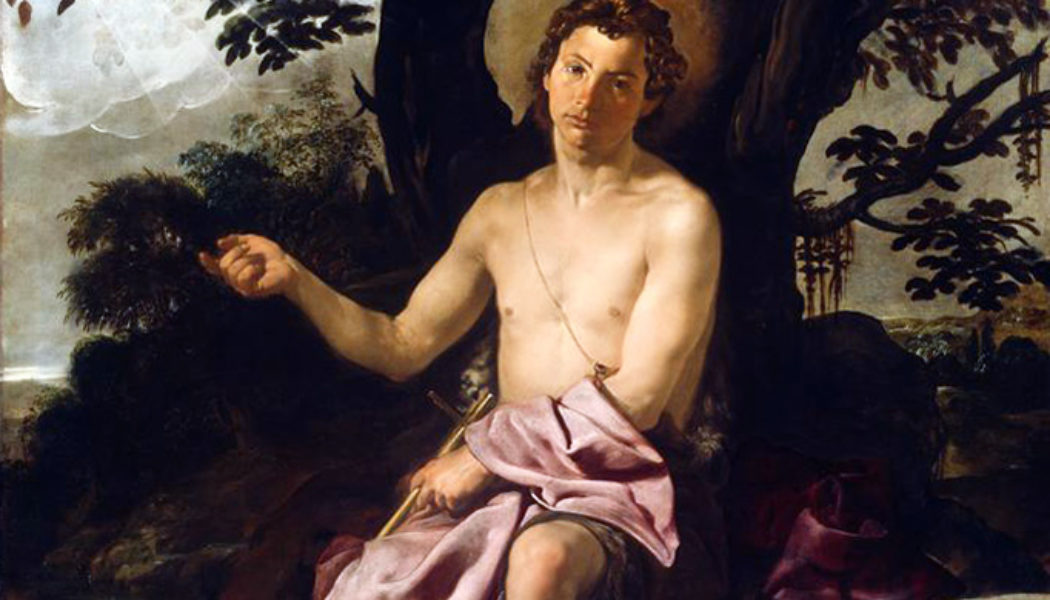 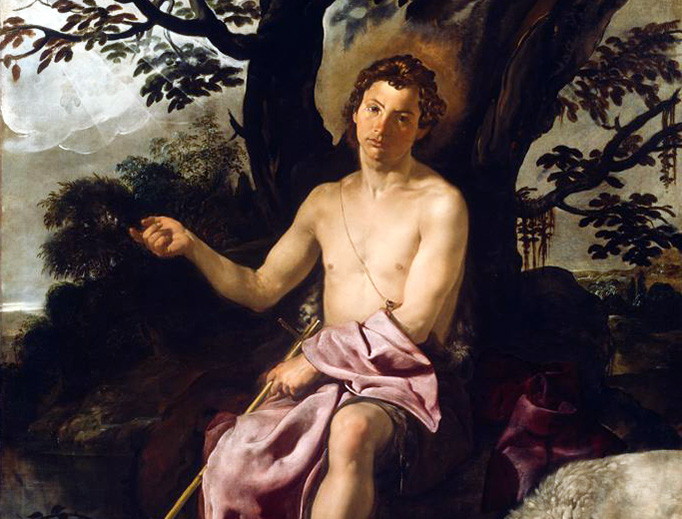 John the Baptist is a mysterious figure in the New Testament.

He was famous in his own day, even before he became the herald of Christ.

We even know about him from outside the New Testament.

1) How was John the Baptist related to Jesus?

John was related to Jesus through their mothers. In Luke 1:36, Elizabeth is described as Mary’s “kinswoman,” meaning that they were related in some way through marriage or blood.

Most likely, it was a blood relationship, but neither a particularly close or distant one.

Elizabeth, being elderly, may have been an aunt, great-aunt, or one of the many types of “cousin.” The precise relationship cannot be determined.

This means that Jesus and John were cousins in one or another senses of the term.

2) When did John the Baptist’s ministry begin?

Luke gives us an extraordinarily precise date for the beginning of John’s ministry. He writes:

In the fifteenth year of the reign of Tiberius Caesar . . . the word of God came to John the son of Zechariah in the wilderness; and he went into all the region about the Jordan, preaching a baptism of repentance for the forgiveness of sins [Luke 3:1-3].

“The fifteenth year of Tiberius Caesar” is most naturally understood as a reference to A.D. 29.

This is important also because Luke suggests that Jesus’ ministry began shortly after John’s did, which places the likely date of Jesus’ baptism in A.D. 29 or early A.D. 30.

3) Why did John come baptizing?

Scripture presents us with several reasons.

He served as the forerunner or herald of the Messiah and was to prepare for him by fulfilling an Elijah-like role by calling the nation to repentance.

In keeping with that, he baptized people as a sign of their repentance.

He also came to identify and announce the Messiah. According to John the Baptist: “I myself did not know him; but for this I came baptizing with water, that he might be revealed to Israel” (John 1:31).

This identification was made when he baptized Jesus: “I saw the Spirit descend as a dove from heaven, and it remained on him. I myself did not know him; but he who sent me to baptize with water said to me, ‘He on whom you see the Spirit descend and remain, this is he who baptizes with the Holy Spirit.’ And I have seen and have borne witness that this is the Son of God” (1:32-34).

4) How did John’s arrest affect Jesus?

The gospels indicate that the early ministries of John the Baptist and Jesus both took place in Judea, in the southern portion of Israel, near Jerusalem.

But John was arrested by Herod Antipas, the ruler of Galilee and Perea, which included part of the wilderness near Jerusalem.

This led Jesus to begin his ministry in Galilee:

Now when he heard that John had been arrested, he withdrew into Galilee [Matthew 4:12].

5) What does John have to teach us about on-the-job morals?

Quite a bit! He was quizzed by both tax-collectors and soldiers about what they needed to do to be right with God.

Both of these positions required cooperation with the Roman Empire, and they were wondering if they had to quit their jobs.

John tells them no, but to do their jobs in a righteous manner. This is important for us today as so many are required to cooperate with employers, states, and corporations that are — in part — engaged in immoral actions.

Tax collectors also came to be baptized, and said to him, “Teacher, what shall we do?”

And he said to them, “Collect no more than is appointed you.”

Soldiers also asked him, “And we, what shall we do?”

6) Was John the Baptist Elijah reincarnated?

No. In Jesus’ day, the scribes predicted that Elijah would return before the coming of the Messiah.

At one point Jesus was discussing John the Baptist and said, “if you are willing to accept it, he is Elijah who is to come” (Matthew 11:14).

This has led some New Agers to assert that John the Baptist was the reincarnation of Elijah.

There are several problems with this. Not the least of them is that Elijah never died.

If you read 2 Kings 2:11, you’ll see that — instead of dying — Elijah was assumed into heaven by a whirlwind (biblical text here).

Since Elijah never died, he could not be reincarnated.

By identifying John the Baptist as the “Elijah” who was to come, Jesus indicated that the fulfillment of the Elijah prophecy was not meant to be taken in the literalistic way that the scribes of his day took it.

Elijah himself was not to return and go about Judaea, ministering to people. Instead, someone like Elijah was to appear and do this, and that person was John the Baptist.

7) How famous was John the Baptist in his own day?

It’s easy for us to think of John the Baptist as simply the forerunner and herald of Christ, but he was quite famous in his own right.

8) How did he get followers outside of Israel?

Apparently through the preaching of individuals who spread his message elsewhere.

One of these seems to have been Apollos, who later became a Christian evangelist.

Now a Jew named Apollos, a native of Alexandria, came to Ephesus. He was an eloquent man, well versed in the scriptures.

He had been instructed in the way of the Lord; and being fervent in spirit, he spoke and taught accurately the things concerning Jesus, though he knew only the baptism of John [Acts 18:24-25].

Apparently, Apollos had some knowledge of the connection between John the Baptist and the Messiah, but only limited knowledge. He did not know about Christian baptism and the difference between it and John’s baptism.

Aquila and Priscilla gave him supplementary knowledge to complete his understanding of the Christian message (Acts 18:26-28), but word apparently did not get to all of his followers at first.

When St. Paul returned to Ephesus, he found about a dozen of his apparent disciples in Ephesus, who had heard of John’s baptism but not Christian baptism and the Holy Spirit (Acts 19:1-7). These were apparently converts made by Apollos based on his knowledge of John the Baptist’s movement, before he learned the full message of Christ.

9) Who killed John the Baptist?

That would be Herod Antipas, one of the sons of Herod the Great, who inherited the regions of Galilee and Perea as his territories.

The gospels portray him as a complex man. For a start, he has an unlawful marriage. At some point, he apparently stole Herodias, the wife of his brother Herod Philip.

That put him in opposition to John the Baptist, who opposed the union (Mark 6:18), leading Herod to arrest John (Matthew 14:3).

Although he had John in custody, and although his wife hated John and wanted him dead, Herod Antipas served as John’s protector and had an unusual fascination with the fiery preacher: “Herod feared John, knowing that he was a righteous and holy man, and kept him safe. When he heard him, he was much perplexed; and yet he heard him gladly” (Mark 6:20).

Even John’s death did not end Antipas’s fascination with him. When he began to hear reports about Jesus, he thought Jesus might be John raised from the dead (Mark 6:14), and he sought to see Jesus for himself (Luke 9:9).

Herod Antipas’s wife, Herodias, hated John with a passion. (Presumably for publicly criticizing her betrayal of her former husband — Herod Philip — and her marrying his brother.)

Eventually, after her daughter Salome delighted Antipas with a special dance at his birthday party, Herodias was able to manipulate him into giving the order for John’s death by beheading (Mark 6:21-28).

11) Where do we learn of John the Baptist outside the New Testament?

In the Jewish historian Josephus. He records that one of Herod’s armies was destroyed the A.D. 36 and states:

Now, some of the Jews thought that the destruction of Herod’s army came from God, and that very justly, as a punishment of what he did against John, that was called the Baptist; for Herod slew him, who was a good man, and commanded the Jews to exercise virtue, both as to righteousness towards one another, and piety towards God, and so to come to baptism; for that the washing [with water] would be acceptable to him, if they made use of it, not in order to the putting away [or the remission] of some sins [only], but for the purification of the body; supposing still that the soul was thoroughly purified beforehand by righteousness.

Now, when [many] others came in crowds about him, for they were greatly moved [or pleased] by hearing his words, Herod, who feared lest the great influence John had over the people might put it into his power and inclination to raise a rebellion (for they seemed ready to do anything he should advise), thought it best, by putting him to death, to prevent any mischief he might cause, and not bring himself into difficulties, by sparing a man who might make him repent of it when it should be too late.

Accordingly he was sent a prisoner, out of Herod’s suspicious temper, to Macherus, the castle I before mentioned, and was there put to death.

Now the Jews had an opinion that the destruction of this army was sent as a punishment upon Herod, and a mark of God’s displeasure against him [Antiquities 18:5:2].

The details of Josephus’ account differ from the gospels’. He apparently was not aware of the role of Herodias and her daughter in the matter, or Herod’s complex relationship with John, and attributes to him the standard suspicion of a prophetic leader that any ruler of the time might have.

The Christian community’s awareness of more of the details likely came through a woman named Joanna, who was the wife of a man named Chuza, who was a steward of Herod Antipas and thus a court insider.

Joanna was one of the followers of Jesus (Luke 8:1-3), and it may well have been through her that the more detailed information comes through her.

This article originally appeared Aug. 28, 2013, at the Register.