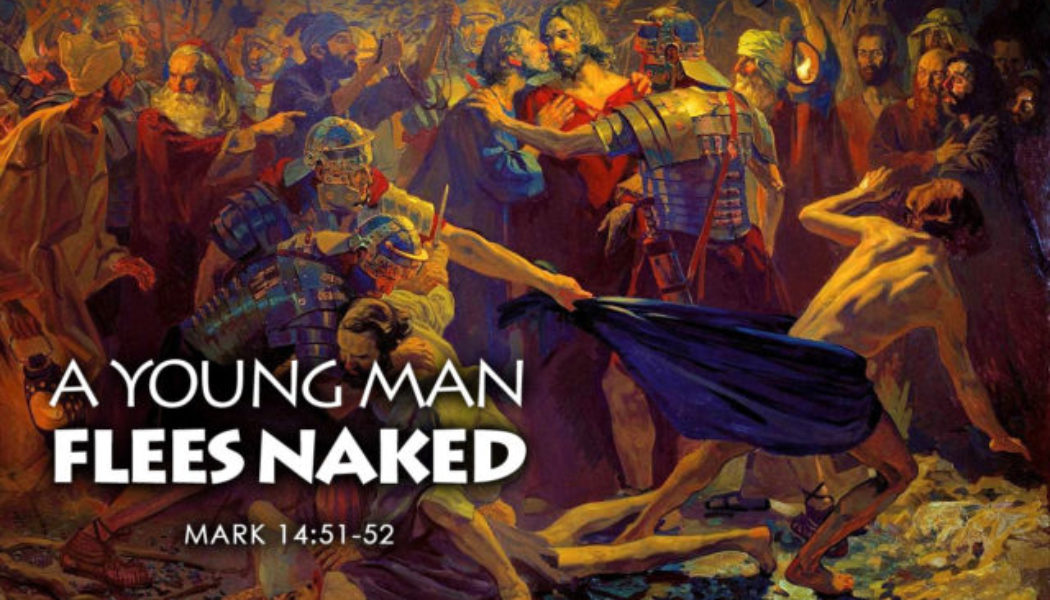 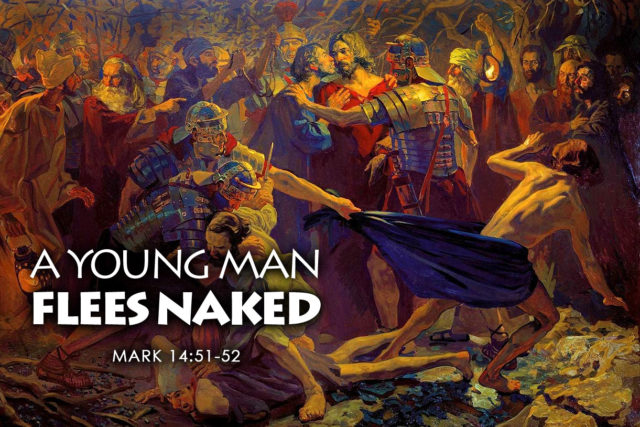 Mark contains a brief story not found in the other Gospels. Immediately after Jesus’ arrest, the Eleven scatter, and we read:

And a certain young man was following him, clothed only in a linen cloth on his naked body. And they attempted to seize him, but he left behind the linen cloth and fled naked (14:51-52, LEB).

People naturally want to know who this young, anonymous man was.

Today, many say it was Mark himself—that he recorded this incident the way medieval artists sometimes put tiny portraits of themselves in their paintings or the way Alfred Hitchcock briefly appears in his films.

Some may even suppose this is the traditional answer that has always been believed, but it’s not. The Church Fathers made other proposals, and this theory only became common in the late 19th century.

There also are problems with it. One is that the Greek word for “young man” (neaniskos) indicates a man who is past puberty and thus in his late teens or early 20s.

But when we meet Mark in Acts 12:12, it is the year A.D. 43—a decade after the Crucifixion—and it appears that Mark is a young man then, not one pushing or over 30.

We also have testimony from a first century figure named John the Presbyter, who says Mark “had not heard the Lord, nor had he followed him” during his ministry (Eusebius, Church History 3:39:15).

Finally, we don’t have evidence of an ancient literary tradition of authors giving themselves brief, anonymous appearances in their works. That isn’t what Mark’s audience would expect, so this theory reads a much later artistic and cinematic technique into ancient literature.

Another proposal is that this was a random person—not a member of the Christian community—who happened to be following out of curiosity and got nabbed.

This isn’t impossible, but the argument for it is weak. The argument is that people normally wore two garments, an inner one and an outer one. So, perhaps the young man was asleep, heard the noise, quickly put on a single garment, and when to see what the commotion was.

The problem is that people also sometimes wore just one garment, so the man was not clearly underdressed.

Further, if he were not a Christian, why would the authorities grab him? Mark tells us that “a crowd” was present for the arrest (14:43), and a person walking along with the crowd would not be grabbed unless he previously had been seen among Jesus’ followers.

The preservation of the story—and its use by Mark—would be more logical if the person was known to the Evangelist and his audience.

In that case, the question would be: Why isn’t his name mentioned?

Scholars have noted that, in the Synoptic Gospels, certain people remain curiously anonymous in the Passion narrative.

What these figures have in common is that they committed acts that would be considered seditious by the Jerusalem authorities. The woman anointed Jesus, which could be seen as consecrating him for his role as the anointed Messiah, the king of the Jews. The householder then hosts the new rebel king. And the last takes up arms in defense of the rebel king.

When the story of Jesus’ Passion was first being told in the Jerusalem church, it would not be safe to publicly name these people—not if they still lived in or visited Jerusalem, where the Jewish authorities could get them.

Neither would it do to write their names in a Gospel that would find its way to the Jerusalem church. So, the theory is that the Synoptic Evangelists give these people “protective anonymity.”

But when John was written, the individuals may have moved away, died, or already been taken into custody, so they didn’t need protection.

But their identities were known in the Christian community from the beginning. Jesus had said, concerning Mary, “wherever the gospel is proclaimed in the whole world, what she has done will also be told in memory of her” (Mark 14:9), and when Peter was preaching the gospel orally, he would have identified himself as the man with the sword.

Could Mark be withholding the identity of the “certain young man,” though it was known to the Christian community? Might we have heard of him? If so, who might it be?

St. Ambrose suggested that it might be John son of Zebedee, but it’s hard to see why he would need protective anonymity. People knew he was one of the Twelve, and Mark names him as present at the time of the arrest (14:33). He already was in danger as a known supporter of Jesus, and merely escaping an arrest was not a seditious act.

Theophylact of Ohrid suggested the man might be James the “brother” of the Lord. However, Jesus’ brethren didn’t believe in him during his ministry (John 7:5), so he was unlikely to be following Jesus that night.

Some have proposed that the “beloved disciple” was actually John the Presbyter, who was from an aristocratic Jerusalem family and personally knew the high priest. He may have been the host of the Last Supper, which is why he was seated next to Jesus (John 13:23).

If so, there could be reason to shield his identity, and he never names himself in the Gospel!

However, he doesn’t identify himself as the man who ran away. And, after Jesus is arrested, he follows Jesus to the high priest’s house and even gets Peter access to the courtyard (18:15-16). This makes it unlikely he had just escaped arrest.

The ideal candidate for the young man would be someone who (a) was not one of the Twelve, (b) lived in the Jerusalem area, (c) was a follower of Jesus, and (d) was already wanted by the authorities, since he doesn’t do anything criminal in Mark.

Is there such a person? Yes, and it’s Lazarus. Immediately after John records Mary anointing Jesus, he says:

When the great crowd of the Jews learned that he was there, they came, not only on account of Jesus but also to see Lazarus, whom he had raised from the dead.

So the chief priests planned to put Lazarus also to death, because on account of him many of the Jews were going away and believing in Jesus (12:9-11).

The authorities thus were already looking to kill Lazarus. But he may not have known this, which could explain why he thought it would be safe to follow, only to be seized and forced to flee naked.

Lazarus—like his sister Mary—was known to the early Christian community, and when the Passion was retold in the Jerusalem church, people would have known the parts they played. Yet, it wouldn’t have been safe to name them publicly, such as in a Gospel, as long as they remained alive and in the Jerusalem area.

This doesn’t prove Lazarus was the man who ran away naked, but it fits the evidence, and it’s an intriguing possibility!

Heart eternity ring. Here are seven tips that every borrower should keep in mind when applying for an sba loan. What rights you have over your data.