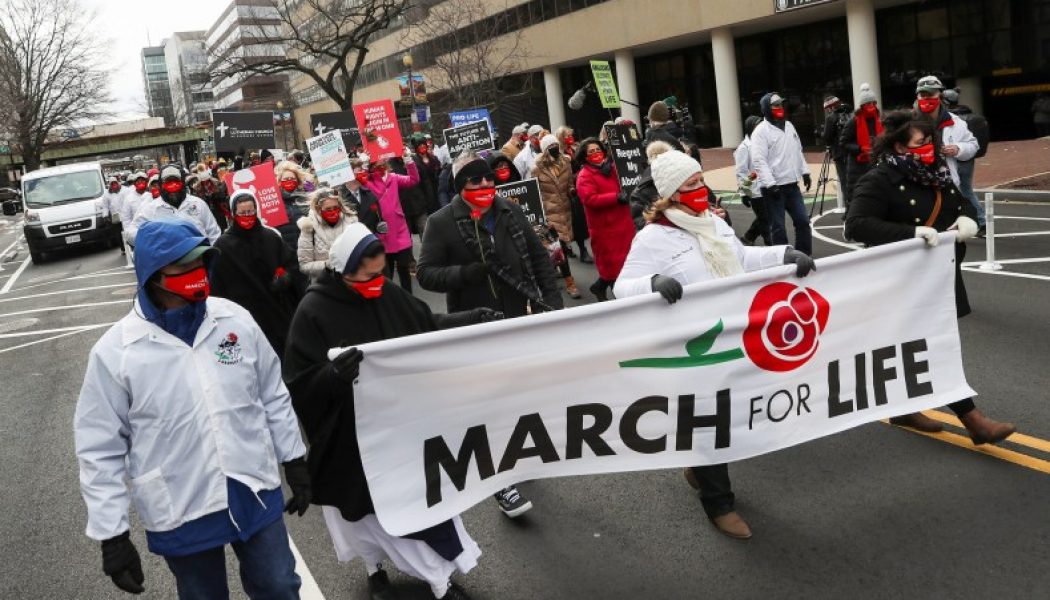 The president and his inaugural poet inadvertently force essential questions.

‘We will never again sow division. Scripture tells us to envision that everyone shall sit under their own vine and fig tree and no one shall make them afraid.” That’s from Amanda Gordon’s poem “The Hill We Climb,” which she read at our 59th presidential inauguration. They were consistent with President Biden’s own words to those who did not support him: “Hear me out as we move forward. Take a measure of me and my heart.”

Unfortunately, Joe Biden didn’t wait even until the end of the week to pounce on some of his most divisive priorities. The statement that he and Vice President Kamala Harris released for the 48th anniversary of Roe v. Wade, the Supreme Court decision that made abortion legal in all three trimesters of pregnancy, was the most vehement yet from any Democratic administration.

After asserting that “reproductive health . . . has been under relentless and extreme attack,” Biden and Harris write that the administration is “deeply committed to making sure everyone has access to . . . reproductive health care.” The statement continues:

The Biden-Harris Administration is committed to codifying Roe v. Wade and appointing judges that respect foundational precedents like Roe. . . . Now is the time to rededicate ourselves to ensuring that all individuals have access to the health care they need.

One of the problems here, of course, is that abortion isn’t mere health care. It isn’t your heart medication or chemotherapy for cancer — which, by the way, some patients have been unable to access during the rolling shutdowns for COVID. But, unlike these treatments, abortions have been available throughout the pandemic. Abortion is the ending of a life. It’s the severing of the most precious bond there is, the one between a mother and child.

It is not reproductive health care when a woman is forced to get an abortion under threat of force — I’m aware of one specific incident in New York City where this was the case, just as Biden was being inaugurated. And that woman is far from alone.

Can we step away from politics for a moment in this 49th year of legal abortion and consider what it is and how we can serve women and children and families better? Not simply as a federal government, but as individuals and families and communities. Most of us don’t wake up in the morning thinking about making sure that women can have abortions. And most of us don’t wake up in the morning thinking how about we can help women stop feeling that they must have abortions — as many do — either. The pressures in our culture are legion. This is not freedom. This is not empowerment. This is not dignity. It’s the continued immiseration of women, to use a word that Antonin Scalia Law School professor Helen M. Alvaré often uses.

The Biden-Harris statement was not a surprise, of course, to those of us who oppose abortion. But if his inaugural words were heartfelt, he wouldn’t have been so callous to the Americans who could not in good conscience vote for him because of his position on abortion.

Polls consistently tell us that most Americans don’t quite realize what Roe really is — abortion legal through all three trimesters. Many Americans who describe themselves as pro-choice simply want to know that women in a difficult position have a choice. And they should. It’s quite common for married couples to struggle with infertility. Many of them would love to welcome a child into their home. Why are we killing babies when babies are wanted? And why do we see ads for surrogates — being a surrogate mother can be so tempting for a woman who is struggling financially; it’s so often obvious exploitation — when there are children languishing in the foster-care system?

About the young poet Amanda Gordon: It was only hours after the Roe statement from the new White House that she posted online her video insisting that Roe remain “alive.” Speaking about efforts to put restrictions on abortion, she intoned:

By forcing them into motherhood before they’re ready, these bans steadily sustain the patriarchy. . . . If the sexes and all people are to be equal, abortion has to be actually accessible, not just technically. This fight is about fundamental civil rights. . . . It’s about every single one of us.

Except the unborn babies. Also, how much do we truly care about women when the best we can offer them is an end to their pregnancy?

“The alt-right’s biggest blunder is that most Americans aren’t under their impression is that a woman’s body is up to them to decide,” Gordon adds. Pope Francis says abortion is a human-rights issue. I don’t think many people confuse him with the “alt-right.” There are Democrats — Biden has even said he’s among them privately — who are pro-life. It’s hard to get anywhere in the Democratic Party, though, if you are — just ask former congressman Dan Lipinski, who was primaried because of his courageous pro-life position. Democrats would be wise to recognize that — and to realize that this largely hidden, intimate violence might be contributing to what is miserable in our nation.

It would be some radiant light if we’d come together — pro-life and pro-choice — and take a second look at abortion in America.