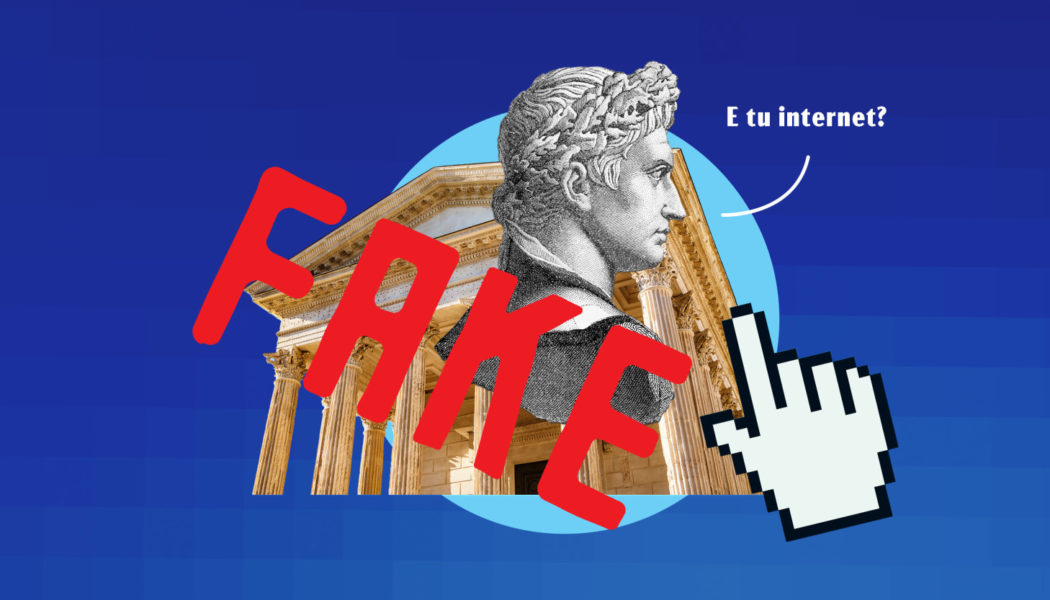 When Alex Fitzpatrick decided to pursue a career in archaeology, her friends from school asked her, not entirely jokingly, “Oh, like the Ancient Aliens people?” referring to the popular A&E Networks show based on the pseudoscientific premise that extraterrestrials visited Earth thousands of years ago.

“No, I’m going to be a real archaeologist,” she recalled responding. Now a researcher and science communicator with a doctorate in archaeology, Fitzpatrick told The Daily Beast that her field has long attracted intrigue from fringe thinkers.

“Historically, archaeology has been weaponized for loads of different things, whether it’s eugenics, race science, or nationalistic propaganda, so archaeology is very ripe for this kind of conspiracy thinking,” she said.

That’s why Fitzpatrick wasn’t shocked when she started seeing tweets about one conspiracy theorist’s bold and easily disprovable take that the Roman Empire never existed. In a Twitter thread featuring a video that’s been viewed over 740,000 times, this user spouts bizarre claims including that the city of Rome was a Vatican period piece constructed in the 1500s and that ancient Roman coins are modern-day forgeries.

Predictably, the internet is having a field day over these claims. A number of actual historians and archaeologists have tweeted out long threads with evidence that, um, actually, Rome definitely existed. Other academics have cautioned that engaging in the discourse is not only unlikely to change minds but could be counterproductive as it spreads the initial conspiracy theory. A cottage industry dunking on the original poster has sprung up on YouTube.

Still others have raised an important point: Haven’t we heard this before? Because, in fact, this same creator went viral last year on TikTok for this theory, using some of the same exact videos.

How has the same content managed to go viral like clockwork on multiple social media platforms? Certain collective phenomena (cough cough, pandemic) have predisposed us to fall victim to conspiracy theories, experts told The Daily Beast. From there, a set of quantifiable factors can help explain why misinformation can go viral again and again. And, as much as we’d want the discourse to be innocuous fun, there’s more than meets the eye to this conspiracy theory.

It’s worth unpacking what makes some people seek out and believe conspiracy theories. Karen Douglas, a British researcher at the University of Kent who studies the psychology of conspiracy theories, told The Daily Beast in an email that individuals are attracted to these theories to meet one or more of their psychological needs. This can include a desire to know the truth, to have control over one’s environment, or to feel positively about social and identity groups.

According to Douglas, the body of research about conspiracy theories and the people who believe and amplify them suggests that anyone can fall prey to one if it fulfills an unmet psychological need. More people than usual may fall under that category these days, she said.

“People are scared and uncertain about the pandemic and are looking for ways to cope with the uncertainty, insecurity, and loss of social contact,” Douglas said. “Indeed, conspiracy theories do seem to thrive in times of crisis.”

“Conspiracy theories do seem to thrive in times of crisis.”

The content of a conspiracy theory also influences its uptake and spread, said Joseph Uscinski, a political science researcher at the University of Miami and author of the book American Conspiracy Theories. People tend to seek out conspiracy theories that entertain them and fit with their worldview; moreover, historical revisionism has been made mainstream through shows like Ancient Aliens and the mockumentary Mermaids: The Body Found, which convinced enough people of the fictional creatures’ existence that the National Oceanic and Atmospheric Administration had to put up a webpage debunking the myth.

While there may be a contingent of people for whom this conspiracy theory fits with their existing worldviews, Uscinski said that many more people who have studied years of history in high school and college will not be very open to the idea that “much of the history they learned was completely made up.”

Uscinski thinks that a lot of the interaction with this latest web conspiracy is that the interaction by social media users “is not necessarily by believers, but by other people watching it because it’s funny and interesting,” he told The Daily Beast. “I guess if we wind up with a cadre of people on campus who are, like, ‘Rome truthers,’ I’ll be concerned.”

Typically, Uscinski conducts research by surveying the general population about specific conspiracy theories to identify the factors that lead to their popularity. He said a reason why he hasn’t included the conspiracy theory that ancient Rome didn’t exist is because “it’s sort of goofy.”

Still, innate appeal doesn’t explain the cyclical nature of the Rome conspiracy theory’s virality. To study how and why theories take off, some social scientists have taken a page from a very different kind of viral research: infectious disease modeling. Last year, researchers in Germany published a study in PLoS ONE that applied a standard epidemic model known as an SIR model to Twitter data and predicted the spread of the conspiracy theory that the spread of the coronavirus was caused or enhanced by 5G cellular networks.

For an actual infectious illness, SIR models work by assuming that all the individuals in a population are either susceptible to a disease; infected with it; or removed (such as recovered, immune, or dead). The German researchers took advantage of some easy analogs for their own conspiracy theory model. Within the population of active Twitter users, “susceptible” individuals had not supported the 5G conspiracy theory, “infected” users had tweeted about it, and “removed” users had forgotten about the theory and stopped tweeting about it.

“Ferrying the ‘Rome isn’t real’ conspiracy theory from one social media platform to another can introduce it to people who had not seen it a year ago because they maybe not have been regular TikTok users.”

SIR models become a lot more complicated when factors to make them more realistic are introduced, such as the incubation period for a disease, waning immunity, or differing recovery rates. The researchers found variables analogous to some of these concepts, too, like introducing “fact-checking” conspiracy theories as a form of immunity for some susceptible users, and “deleting tweets” as a recovery rate for infected ones. When they ran the model under these conditions, they found that tweet deletion is only moderately effective at stopping the spread of a viral conspiracy theory, while fact-checking is most helpful at the beginning of the spread.

But SIR models can also be a useful framework for conspiracy theories across platforms. Susceptible individuals are often thought of as people who have not been exposed to an infectious agent and have no immunity against it. Ferrying the “Rome isn’t real” conspiracy theory from one social media platform to another can introduce it to people who had not seen it a year ago because they maybe not have been regular TikTok users.

It’s hard to know what role the quirks of Twitter—and Elon Twitter, specifically—may be playing in this conspiracy theory’s 15 minutes of fame. In late November, Twitter stopped enforcing a policy against COVID-19 misinformation, which meant it no longer removes false claims and conspiracy theories relating to the safety of vaccines. The site also let prominent conspiracy theory-spreading users back onto the platform, including Rep. Marjorie Taylor Green (R-GA).

Amid these developments and acts of violent extremism tied to fringe conspiracy theories, it’s certainly true that people fighting against misinformation have bigger fish to fry than one user claiming that ancient Rome was made up. But it’s a step too far to call any conspiracy theory “harmless,” even this one.

Some of the language used by the original poster of this conspiracy theory apes valid discussions about decolonizing the field of archaeology and focusing on diverse perspectives and experiences, Fitzpatrick said. This similarity concerned her enough to tweet a thread about it, since in the U.K., the discipline is currently “caught in a bit of a culture war.”

“There is a relatively conservative wing of archaeology, and [this conspiracy theory] will be something they can weaponize and immediately say, ‘Well, this is what that woke ideology leads to,’ even though that’s nonsense,” she said. “It’s always been my worry, because we haven’t progressed that much in archaeology.”

If there’s anything to be learned from this saga, it’s the cynical realization that the bizarre conspiracy theory that Rome isn’t real will probably keep going viral, at least as long as the user behind it continues to stoke the flames. And if we’re not careful, it may not continue to be so harmless.

Perfect gifts for teen girls. Example of inserts changing colour. In my previous post, i introduced you to the home office concept service provided by ommik.