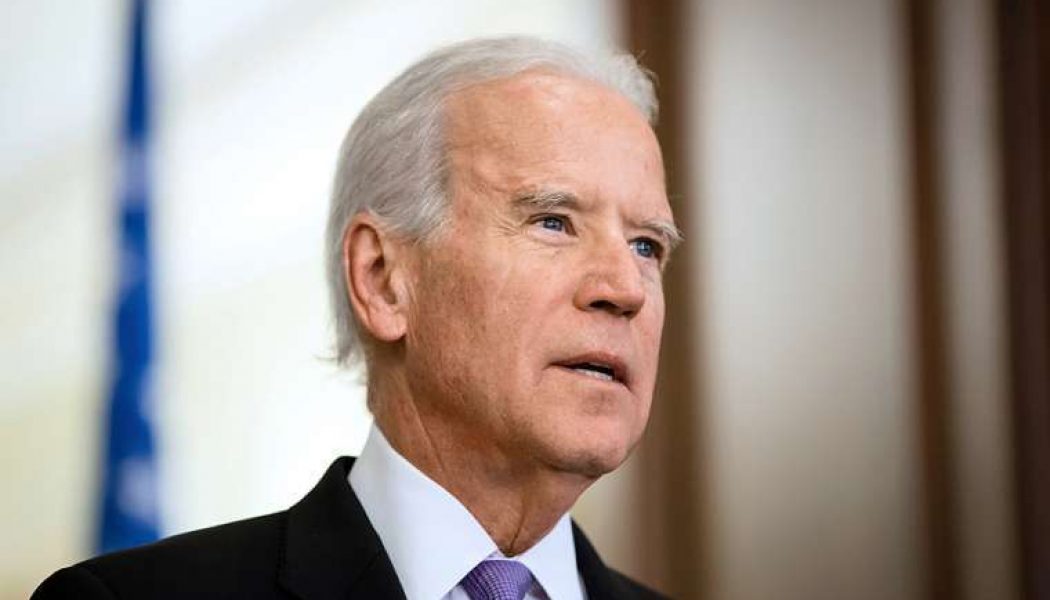 Presumptive Democratic presidential nominee Joe Biden has been working from home these last few months, like a lot of people have. Biden has been campaigning from his house in Delaware: livestreaming interviews, appearing on radio shows, and releasing videos.

But now that Biden has selected a running mate, and is less than three months from Election Day, the candidate is expected to hit the road again —  while respecting social distance, of course.

Biden, a Catholic, is in the habit of going to Mass while traveling. If he resumes that habit, it will soon raise questions familiar both to bishops and to pundits: Can pro-choice politicians like Biden receive the Eucharist? And will anyone stop Biden if he approaches the communion line?

The norm of canon 915 itself is clear: Catholics “obstinately persevering in manifest grave sin are not to be admitted to holy communion.” But debate over that canon, and its application to pro-choice politicians, has vexed the Church in the U.S. every election year since John Kerry’s presidential campaign, and often in between elections, too.

In 2004, Cardinal Joseph Ratzinger, then head of the Church’s doctrinal office, wrote a memorandum to the U.S. Catholic bishops, explaining the application of canon 915 to the question of pro-choice politicians.

The case of a Catholic politician who is “consistently campaigning and voting for permissive abortion and euthanasia laws” would constitute “formal cooperation” in grave sin that is “manifest,” the letter explained.

In such cases, “his pastor should meet with him, instructing him about the Church’s teaching, informing him that he is not to present himself for Holy Communion until he brings to an end the objective situation of sin, and warning him that he will otherwise be denied the Eucharist,” Ratzinger wrote.

If the individual perseveres in grave sin and still presents himself for Holy Communion, “the minister of Holy Communion must refuse to distribute it.”

Shortly after Ratzinger wrote that memo, the U.S. bishops agreed the application of those norms should be decided by individual bishops, rather than by the bishops’ conference, largely under the influence of Theodore McCarrick, then-Archbishop of Washington, who paraphrased the letter, which was not yet publicly available, but did not present it in its entirety to the bishops.

Some bishops have prohibited politicians advocating for “permissive abortion laws” from receiving communion, but others have demurred, or said outright they would not deny such politicians the Eucharist.

Biden’s own shepherd, Bishop William Malooly, has said in the past that he does not want to “politicize” the Eucharist by denying communion to politicians. Washington, D.C.’s ordinary, Archbishop Wilton Gregory, has said that the Eucharist should be denied only as a last resort, and is not on record as ever having done so.

But while bishops are circumspect about the issue, many active Catholics are not. Practicing pro-life Catholics have in recent years lambasted bishops for their reticence to withhold the Eucharist from pro-choice politicians. Some have called the bishops’ approach a scandal. Many young priests have echoed those calls.

In the frustration of not being heard, and in the wake of the McCarrick scandal, those calls intensified last year as several states passed expansive abortion laws. The controversy widened an already broad gap of distrust between many Catholics and their leaders.

Biden, who supports the federal funding of abortion and in 2016 officiated at a same-sex wedding, is likely to prompt similar calls from lay Catholics in the months to come.

So here’s what’s likely to happen:

At some point between now and election day, a young priest will find Joe Biden in his communion line. Because of the priest’s convictions about the unborn and his sacramental theology, he will deny Biden the Eucharist.

Someone will see it, a report will get out. CNA may well break the story (our reporters are the best in the business.)

Biden will say very little himself, and he won’t have to.

The priest will issue a statement explaining himself, and then be roundly criticized. A cardinal will appear on television, and he’ll disagree with the young priest’s decision. Pro-choice or progressive leaning Catholics will on social media call the priest a fundamentalist, and point out, correctly but as a distraction, that Trump also takes positions contrary to the Church’s teaching. The priest’s diocese will say very little. Other priests will wonder whether their bishops will support them, if they too act to follow the Vatican’s guidance on the matter.

After a news cycle or two, the issue will mostly die down, leaving those who continue to raise their concern ever more alone, and looking ever more like zealots.

In their frustration, some will turn to a growing chorus of anti-episcopal conservative media figures who make a living criticizing the Church’s leaders. Bishops will lament the popularity of those figures.

If that prediction sounds quite specific, that’s because it’s what happened in October 2019, the last time Biden was denied the Eucharist.

Some version of that story will happen again because, as things stand, the policy and the practice of the Church on this issue diverge from each other, dramatically.

That leaves priests who put the policy into practice standing often by themselves. It leaves some Catholics confused about how seriously the Church takes its own teaching and its own sacramental discipline. Other Catholics, those who have watched that cycle play out a few times, are less confused than demoralized, and cynical.

But if election pollsters have it right, this issue isn’t going away. Biden, who would be the second Catholic president, has a big lead over Trump. Unless something changes, he’s likely to be the first Catholic president since Roe vs. Wade, and the first to publicly support abortion.

The U.S. bishops decided on a patchwork, diocese by diocese, approach to canon 915 in 2004. In some senses, from an ecclesiological perspective, that localized approach might make sense.

But the country may soon find itself with an aggressively pro-abortion president who likes going to Mass, and a piecemeal approach to an important question of sacramental discipline. Practically, that situation is likely to foment further division in the Church, as bishops promulgate dueling policies under a national spotlight.

Nevertheless, it seems unlikely that any bishop will take up the project of making a nationwide change on this issue, and there are only a few positioned well to do so.

The Archbishop of Washington and the Bishop of Wilmington, both of whom have a platform as Biden’s shepherd, are among those who could.

If either of those bishops took the initiative to say that in his diocese the Church’s canonical discipline on the Eucharist would be applied fairly and consistently to politicians of all parties who break from the Church on grave and clear matters, a precedent would be set, and easily followed across the country.

Failing that possibility, if Cardinal Dolan had a change of heart, and announced that in the Archdiocese of New York the Church’s sacramental discipline would be applied in accord with the Church’s instructions, other bishops would likely follow suit. Church watchers would likely see that as a recovery of Dolan’s once praised legacy on pro-life issues, which was tarnished amid the controversy over Cuomo.

Bishops don’t like to go first, generally, but many are willing to follow the right leader. If a nationally leading Churchman set a change in motion, many would follow suit. Eventually, only a dozen or so bishops staunchly opposed to “politicizing” the Eucharist might be left.

Both Washington and Wilmington are led by bishops rarely characterized as conservative. Washington’s Archbishop Gregory is struggling to gain trust as a reformer, the job for which he was sent to Washington. Insistence on applying the Church’s law, as written, would likely bolster Gregory’s credibility on that front. But the archbishop led the U.S. bishops’ conference in 2004, when he and McCarrick were seen to push for a permissive interpretation of Ratzinger’s letter, and there is no evidence to suggest he has changed his thinking on the subject.

Bishop Malooly, who is almost 77, is even less likely to change his long-standing policy than Gregory is. But his successor, who could be appointed as early as September, might be of a different mind. And he would have to his advantage the unique window of time in which a new bishop can make a major change before getting bogged down in the myriad reasons he hears not to make any changes.

If he is appointed before the election, it would be all the easier to make his position clear.

There is one other bishop who might be expected to lead a charge on this issue: Archbishop Jose Gomez of Los Angeles, president of the U.S. bishops’ conference.

Gomez, who is both pro-life and a strong advocate for the Church’s moral teaching on immigration, has the credibility among a broad swath of bishops to call for a unified approach to a vexing problem. But the conference has not passed major, sweeping policies in recent years, and is still recovering from the shockwaves of McCarrick and 2018. Gomez would have little luck unifying the conference on anything so controversial.

But the L.A. archbishop has personal influence: If he decided to announce a policy for Los Angeles, after lobbying other prominent U.S. bishops to announce the same, a cadre of bishops would probably follow them.

For any of those bishops, the media blowback of such a move would be intense, and difficult to get past. But the support among many practicing Catholics, and among priests, who are looking to the Church for leadership, would also be significant. Such a move would not soon be forgotten.

By many estimates, the result of those bishops taking the lead, however unlikely, is that the integrity of the Church’s moral witness might be strengthened. Catholics might grow in respect for their embattled bishops. And, just maybe, a few Catholic politicians who defy the Gospel, from either party, might be moved to conversion.

Whether any bishop will actually decide to break the cycle, or whether Catholics will watch the ‘Communion Wars’ play on for the next several years, is up to the handful of bishops who could meaningfully change the narrative. It seems unlikely they’ll do so. But as America contemplates a change, the Church’s leaders have the chance to make one too.

This analysis has been updated for clarity.