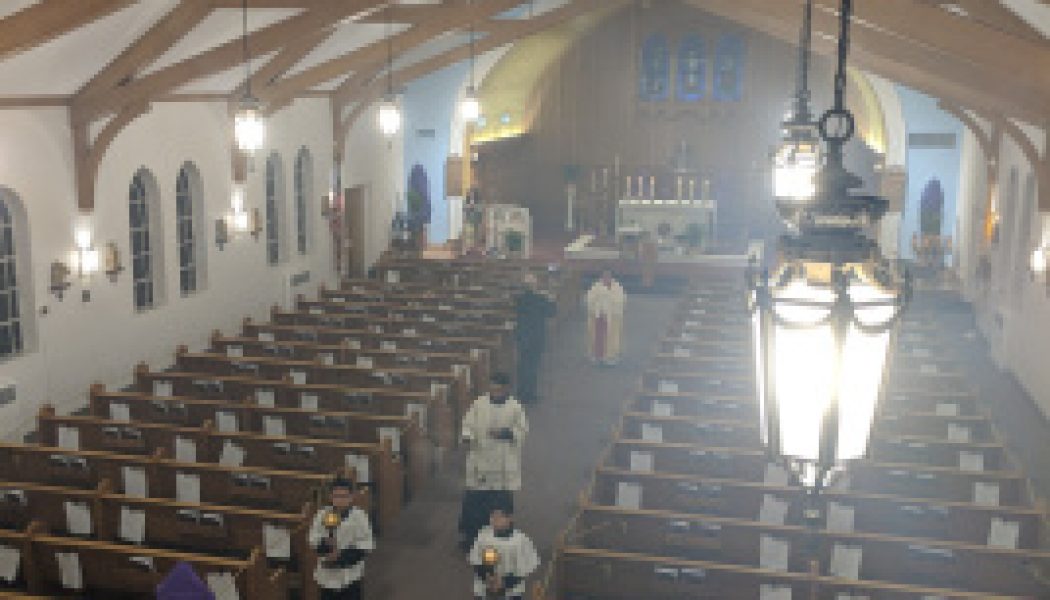 As many of you know, my youngest son has, since October, been the paid, staff organist at a local Catholic parish. He works with a music director, who is also the cantor. There’s no choir at this point. It’s just the organist and a cantor.

When the virus lockdowns hit, the media-savvy pastor immediately went to streaming Masses and holy hours (and doing drive-through confession, btw – which was featured on Good Morning, America.) There was no thought of having the organ continue, which was fine and seemed correct.

Then the week before Palm Sunday, we were at the church exchanging some keys, when it occurred to me, Wouldn’t it be nice to have the organ playing for the Easter livestreaming Mass?

I suggested it, and the suggestion was immediately embraced and expanded – why not start with Palm Sunday?

(Here’s some of the Easter practice.)

Then on the Saturday before Palm Sunday, the reality hit me.

We’ll be among a few thousand Catholics in this country, and maybe even worldwide, who will be attending a Catholic Mass this Sunday.

It honestly shook me a little. As I shared this with the others, I emphasized something: What a privilege. And what a responsibility. Not only to contribute to the beauty of the liturgy through music, but to be present at Mass, receive Jesus in the Eucharist, when so many cannot and are yearning to. Start now – think of all the people you want to pray for.

As it has for many of us without access to the Mass at this time, it prompted thoughts of those persecuted for the Faith, those in mission territories – which is really, most Catholics, through most of history – with only sporadic participation in the sacraments. This present situation will pass, and most of us will have our weekly Mass again. Will we remember this? Will we slip back into resigned sighs that we “have to go to Mass?”

I have no profound spiritual experiences to report from those Masses the past couple of weeks. I felt a bit uncomfortable that I could be there simply because the organist isn’t old enough to drive and requires a chauffeur. I was angry about so many dimensions of the current situation. I did some soul-searching about what I take for granted.

But mostly what I tried to do was to pray, and, as much as I could, in whatever mystical way my small soul could muster, to bring the prayers of everyone I could think of into that moment – all of my kids, my kids-in-law, my grandchildren, my in-laws, my many deceased family members, my friends. They were at home, some of them watching, all with needs and hopes and fears, and so that privileged, mysterious time with Christ couldn’t be just for myself. How could it be? I had to bring them with me, somehow. And not only them, but also those I don’t know and will never know.

I can’t really explain the mechanics of what it means to “offer it up” or to “offer my Communion” for another. All I know is that after my husband died over eleven years ago, hundreds and maybe even thousands of people prayed for us, and I received more notices than I can count of people telling me they’d offered their Communion for us and for his soul, that their Mass intentions were offered for us.

And all I know is that, bluntly put, it worked. We’re fairly fine. I think we’re fine, at least. And we were well on the road to health and acceptance not too long after that shock. Because, I’m convinced, of the prayers.

But having the humbling privilege of going to Mass the past couple of weeks reminded me – again – that it’s not about me. If I am baptized, confirmed, and am a part of the Body of Christ that’s nothing to boast about for my own sake, as Paul says over and over again. It says nothing about me. It’s all about him. Going to Mass in this situation is really a microcosmic illustration of that truth. The Christian life, no matter the circumstances in which we live it, is not about building ourselves up, but about opening ourselves so we, like him, can be poured out.

The gift Jesus gives is, indeed, grace showered on me, salvation and redemption for my soul, but whether I’m the only person in attendance or one of hundreds – or millions – it’s a gift not be hoarded and treasured because it’s mine and even less because it’s my “right” to receive it. It’s a gift. A gift of the freedom that comes only from Christ, a freedom that this broken world so desperately needs. Every moment I have the opportunity to be in communion with Him – in the Mass, outside of it – is a call to remember. To remember not only how much *I* need him, but how much the world needs him, to take, as much as I am able, those needs along with me – and when I have the privilege – to lay them at his feet.

He turned to them expectantly, hoping to get something from them, but Peter said, ‘I have neither silver nor gold, but I will give you what I have: in the name of Jesus Christ the Nazarene, walk!’