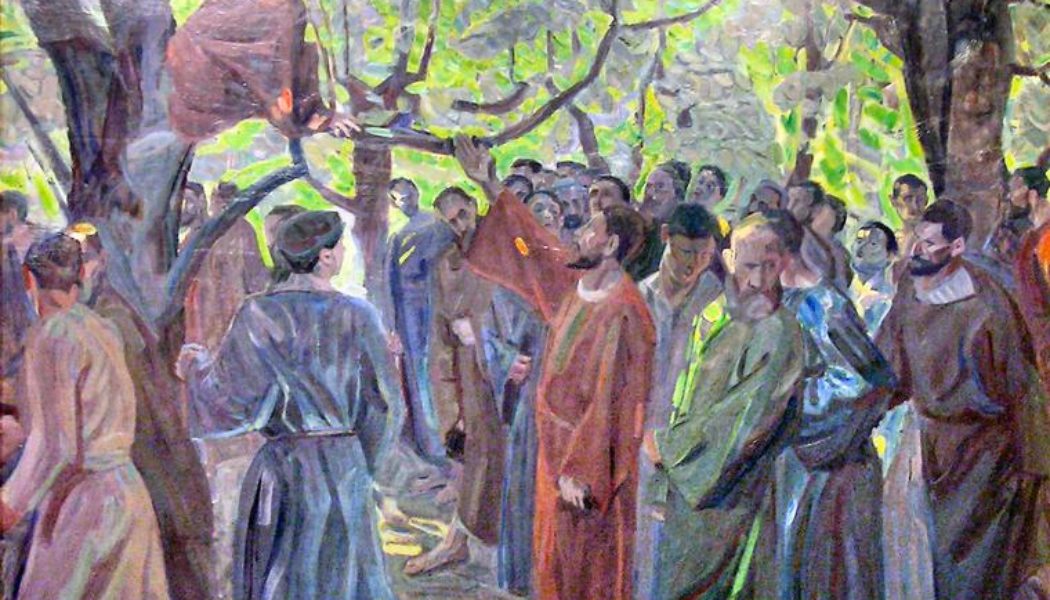 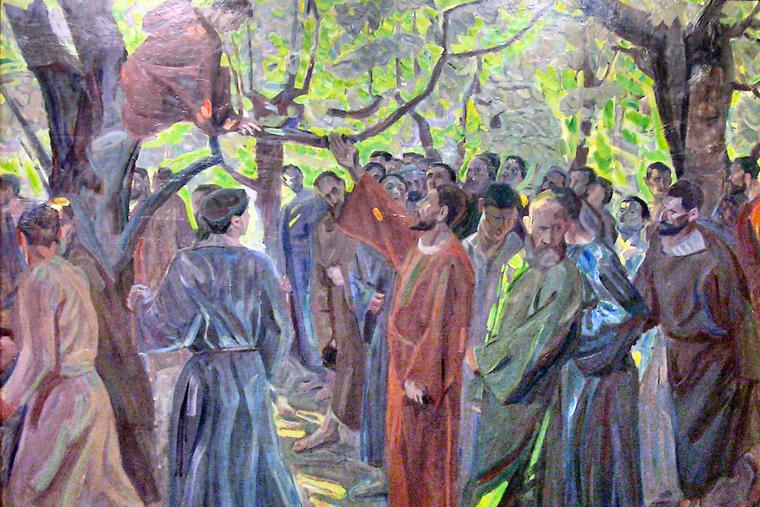 SCRIPTURES & ART: Zacchaeus’ eyes are all for Jesus Christ

Last week, Jesus taught us the parable of the Pharisee and the publican. As a result of how they prayed, the latter left the Temple justified, the former not.

In last week’s essay, I suggested that while the publican’s prayer for mercy opened the way for a change of his life, we don’t know what happened. From the facial expression of the man on Fabritius’ painting, which we studied, it looked as if he was a man peacefully reflecting on what needed to change in his life. I even asked whether the justified tax-collector might be St. Matthew or Zacchaeus.

Well, the story of Zacchaeus follows in this week’s Gospel. (In Luke 18 itself, when Jesus concludes the parable of the Pharisee and publican, he once again predicts his impending Passion and heals a blind beggar as he makes his way toward Jericho).

Most people remember Zacchaeus because Jesus drove him up a tree. Zacchaeus was a tax collector in Jericho, and he was short. Due to his height, he could not see over taller people in the crowd, but he wanted to get a look at this Jesus who’s been all the rage. So he climbed a tree to improve his view.

Jesus sees him and calls him down, saying “today I must stay at your house.” If the Pharisee from last week’s Gospel were around, we almost certainly could hear him “harrumph” at this teacher who “eats with tax collectors and sinners” (Matthew 9:11). Indeed, the local Pharisee clearly grumbles about Jesus’ having “gone to stay at the house of a sinner” (Luke 19:7).

Against those who would judge him instead of themselves, Zacchaeus “stood there and said to the Lord” that he will give half of his possessions (remember the Gospel says he was a “wealthy man”) to the poor and recompense anyone he cheated fourfold. He says this not as a sign of his goodness, like the Pharisee, but as a sign of his resolution, as a repentant sinner.

To which Jesus — as he did last week with the publican — acknowledges Zacchaeus’ justification: “Today salvation has come to this house.” And lest anyone misunderstand that this is what Jesus is all about, he adds, reminding us of the Parable of the Lost Sheep we heard last month: “For the Son of Man came to save and seek what was lost.”

The Polish poet Roman Brandstaetter captures the moment of Zacchaeus scaling the sycamore, describing the tree as an “angel” that bore this “descendant of Abraham” back to Christ. Even if “the people murmured//as they gazed upon a flying tax collector.”

Repentance requires restitution, for one cannot be sorry for ill-gotten gains and keep them. So Zacchaeus today completes the justification the publican began last week: having repented and asked God for mercy, he now contributes his “widow’s mite” by setting right what he has done wrong insofar as he can.

Today’s Gospel is depicted by the Danish artist Niels Larsen Stevns (1864-1941), whose life spanned the second half of the 19th and first half of the twentieth centuries. “Kristus og Zakæus” (Christ and Zacchaeus) was one of his earliest works, dating from 1913.

Jesus stands under Zacchaeus, raising his hand and speaking to the tax-collector who’s gone out on a limb to see him. The two eyes that connect are Jesus’ and Zacchaeus’. Although a few others stare up at him, Zacchaeus’ eyes are all for Christ. Many others in the crowd seem simply not to have noticed (or want to notice), while two men directly on the right, with heads averted, may very well have been among the grumblers and harrumphers.

Commentators tend to assign this painting to “modernism” in art, a broad 20th century movement that encompasses many styles but which was held together by concepts like “rejection of … realistic depiction of subjects; innovation and experimentation with form (the shapes, colors and lines that make up the work) with a tendency to abstraction; and an emphasis on materials, techniques and processes.” Those elements are all on display in this painting: the busy combination of colors that almost blend into each other, the somewhat blurred lines and face that give the picture a non-photographic appearance (as compared, e.g., to Stevns’ Danish contemporary, Harald Giersing).

Jesus is both the center and non-center of the painting: he stands in the middle and his eye connection with Zacchaeus establishes the central point of the painting, but he is otherwise pressed in and in some ways not distinguished from the rest of the crowd. Light is an important element in the painting (and would later grow in importance in Stevns’ art, especially after he traveled later to Italy and France), not unsurprising, given the Midnight Sun summer nights and the dark winter days of Scandinavia.

As noted, this work was among Stevns’ earliest. Throughout his life, Stevns worked on the decoration of churches across Denmark. The painting is in a local museum in Denmark (Randers Art Museum).