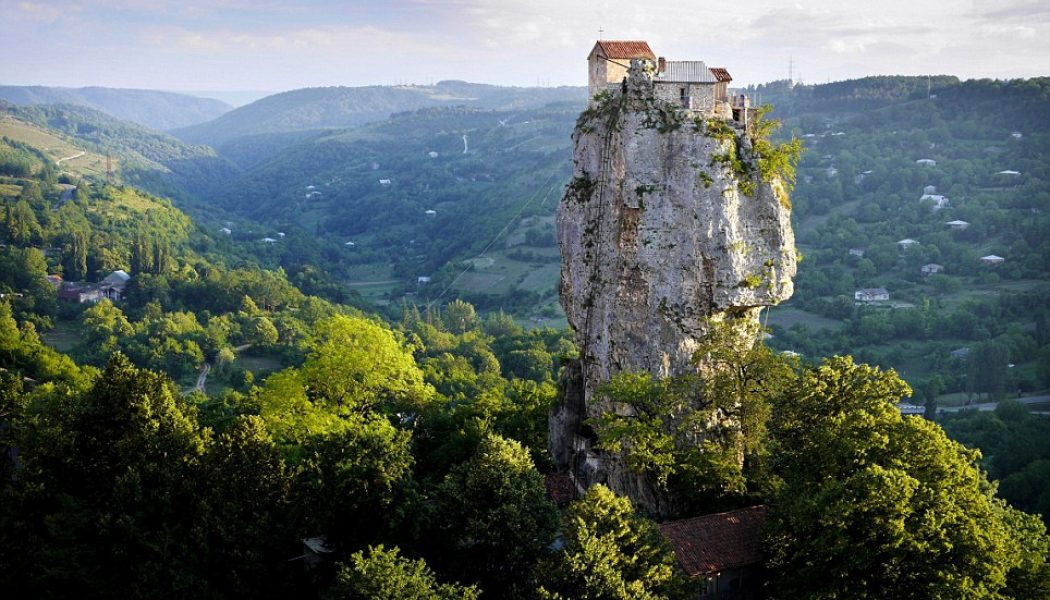 After a week in the priest’s cabin at the Norbertine Monastery of Canonesses in California I can be excused for wishing to hunker down even more than usual. I’m one of those introverts who, when faced with pandemic lockdown, muttered, “So things are going to change?”

The priest’s cabin at the nun’s Bethlehem Priory was one thing, but the way things are going I’m considering the Lakskhi Option. This article from the Daily Mail in London is written at about a first grade level (and that’s an insult to our first graders) but the pictures are good. It features Maxime–the hermit of Lakskhi in Georgia (that would be the country not the state where Flannery O’Connor lived).

Maxime has resurrected the ancient tradition of the stylites by living on a 130 ft high limestone monolith. The site had been abandoned after the Ottoman invasion and during the reign of communism it was impossible for anyone to restore religious life in Russia. But in 1944 a climber got to the top and found the ruins of the 10th century monastery and the skeleton of the last stylite. Archeologists did some work, but it wasn’t until the 1990s that Maxime decided to climb up and re-start the eremitical life there.

He tells how, for the first few years he slept in an old fridge for shelter. But eventually they built a ladder to the top and rebuilt the chapel and a hermit’s cell. Now, at the base of the pillar there’s a small religious community. The guys winch supplies up to Br Maxime, and twice a week he makes the twenty minute climb down the ladder to pray and counsel them.

The story reminds me of one of my visits to a Benedictine monastery. I forget where it was, but after persecutions, closures, decay and decline, some monks had returned to re-establish the monastic life. When I commented on the resilience and continuity of the monastic tradition he just laughed and said, “We’re like weeds. We come back.”

This is one of the reasons I treasure the monastic life. I do my best as a Benedictine oblate, but the more I stop to think, the more I realize that it is in the traditions of monasticism that the church has her life most deeply rooted. Trendy prelates come and go. Corrupt cardinals you shall have with you always. Heretics, like parasites, will always be part of the life, but the monastic traditions offer stability and (if you persevere) real conversion of life.

Remember there is an extra section of the blog called “The Suburban Hermit” where I have archived my articles and pictures of the monastic life. If you are a Donor Subscriber at the Promotion Level and above you can also access my six week video course on Benedictine Spirituality, or you can purchase it as a stand alone product at my bookstore.