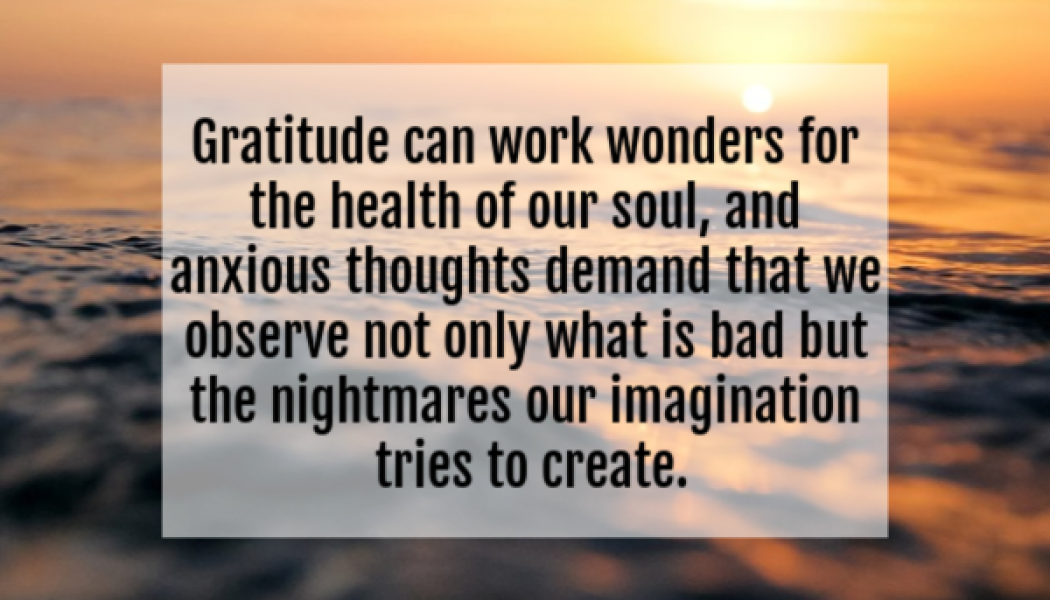 We sat at a stoplight as the children engaged in trivial debate behind me when dizziness invaded. I tried to shake it off, but the adrenaline had already been released. My pulse quickened; looking for the danger my sub-conscience had decided was imminent. Breath was hard to catch, ache diffused across my chest, and my eyes struggled to find focus. I pulled over at a park – our commute home interrupted by trepidation.

“Surely if I just sat in the crisp air for a minute while the children played all would return to normal.” Or so I thought. I get off-balance sometimes, and had just discovered I was anemic after two years of extreme fatigue. I was on a new medication to help relieve some of the symptoms created by my body’s lack of iron; I knew it was most likely the cause of this chaotic episode. My brain, however, seemed more enveloped by my imagination’s ability to create worst-case scenario dramas. Unwilling to accept the rational diagnosis, my body continued the panic cascade.

Not wanting to foolishly ignore symptoms that resembled cardiac distress, I called the kids from the play structure and explained we were walking to the hospital just a couple blocks away.  I probably traumatized the older couple we began walking alongside, as I gave my daughter who often tried to hack my phone the passcode she might need. I don’t like starting sentences with, “If I pass out,” but that day, their safety required it. I prayed. My kids prayed.

The good news is that we got to the ER. They immediately sat me down next to the nurse and quickly got me hooked up to an EKG. My heart was beating too fast, but I was going to be okay. I was instructed to stop taking the meds immediately and rest. In three days I was better. The bad news was a new fear had been awakened; I keenly felt my body could betray me at any moment. This left me in a nearly daily battle with anxiety.

I am tired of being in a state of fight, flight, or freeze. In Psychology Today  Leon F Seltzer Ph.D. reported that while “Almost everyone is familiar with the fight-flight response—your reaction to a stimulus perceived as an imminent threat to your survival. However, less well-known is the fight-flight-freeze response, which adds a crucial dimension to how you’re likely to react when the situation confronting you overwhelms your coping capacities and leaves you paralyzed in fear.” Months have passed, and I am still on the road to overcoming the anxiety incited by medication meant to help me. I’d like to tell you it’s gone, that I am free from it, but it would be a lie. However, by the grace of God I am persevering through it.

The anxiety I have been battling is very specifically related to my health, but as anxiety rates increase across the nation, it is clear that many struggle with their own forms of this torture. Maybe for you, it is set off through parenting, driving, work, school, or just life in general that can send your mind spinning. Or maybe anxiety isn’t your struggle, but you know someone who needs support. These tools have helped me and I offer them in hopes that they will help others; bear in mind I am not a doctor. If you are crippled by anxiety, do not hesitate to get in contact with medical professionals.

One of the best ways to describe the anxiety I have been experiencing is feeling like I am in a perpetual state of fight, flight, or freeze (the body’s survival response to immenent danger) even when I am safe. I am working on taking my body out of the FFF response and entering it into a relaxed state. Sidenote: Vegging out watching Netflix won’t do this. The fastest way I’ve found to change the state I find myself in is to try and take control of my breathing, but this isn’t enough because my mind still races to search for a reason for the terror. By combining the principle of taking thoughts captive and making them obedient with controlled breathing, both the body and the mind find rest.

For example, I can find calm by getting comfortable and meditating on a verse that ministers to the soul. One of my favorites is Exodus 14:14, “The LORD will fight for you; you need only to be still.”

I breathe in while slowly recalling the words, “The LORD will fight for you,” and gradually let the breath out while internally reciting, “you need only to be still.” By intentionally finding a few times during the day to put my body into a relaxed state even if only for a few minutes, I offer my body rest from the havoc anxiety has tried to reap. We can train ourselves to think anxiously, but we can do the opposite as well.

Gratitude can work wonders for the health of our soul, and anxious thoughts demand that we observe not only what is bad but the nightmares our imagination tries to create. Scripture tells us to, think on “…whatever is true, whatever is noble, whatever is right, whatever is pure, whatever is lovely, whatever is admirable—if anything is excellent or praiseworthy—think about such things.”Philippians 4:8

We don’t have to go down the hole of destructive thoughts. In Heather Caliri’s free mini-course on managing anxiety, she calls anxiety a “strange invitation.”  When I view an anxious moment as an invitation to lean into trusting God more and take a gratitude-fueled break, I am far less likely to run to panic as an answer.

Anxiety can be paralyzing, and it can become something that stops our spiritual growth in its tracks. So the tip here is don’t give up, keep moving; don’t freeze, move! Even if you move slowly. Shauna Niequist encourages us all in her book  Present Over Perfect with these words, “Brave doesn’t always involve grand gestures, sometimes brave looks like staying when you want to leave, telling the truth when all you want to do is change the subject… sometimes brave looks like boring, and that’s totally, absolutely, okay.”

It is not easy to stand against forces that seek to destroy us, “For our struggle is not against flesh and blood, but against the rulers, against the authorities, against the powers of this dark world and against the spiritual forces of evil in the heavenly realms.” Ephesians 6:12 Though anxiety can be caused by biology or circumstance, living in anxious fear is not from the Lord and a tool of the devil. The enemy wants us to flee when he should be fleeing from us; he wants us to freeze so we never step into the abundant life Jesus has for us.

Sometimes the best we can do is simply to not give up. We look to our God who is faithful and trust him by taking the next step. We fight against anxiety’s ability to overtake us, but if it does, we hold to the one who is victorious over fear, death, and all the powers of hell. We work in the power of this promise, “The LORD himself goes before you and will be with you; he will never leave you nor forsake you. Do not be afraid; do not be discouraged.” Deuteronomy 31:8

Chara Donahue enjoys freelance writing, biblical counseling, and speaking to women when her four kids are out playing with dad. She holds an MSEd from Corban University and is passionate about seeing people set free through God’s truths. She is a regular contributor at iBelieve and her words have appeared at Christianity Today’s Women Leaders, Crosswalk, (in)courage, and The Huffington Post. She longs to be a voice that says, “Hey we are in this together, and there is room for us all.” You can find more from Chara by following her on Facebook, and Twitter.