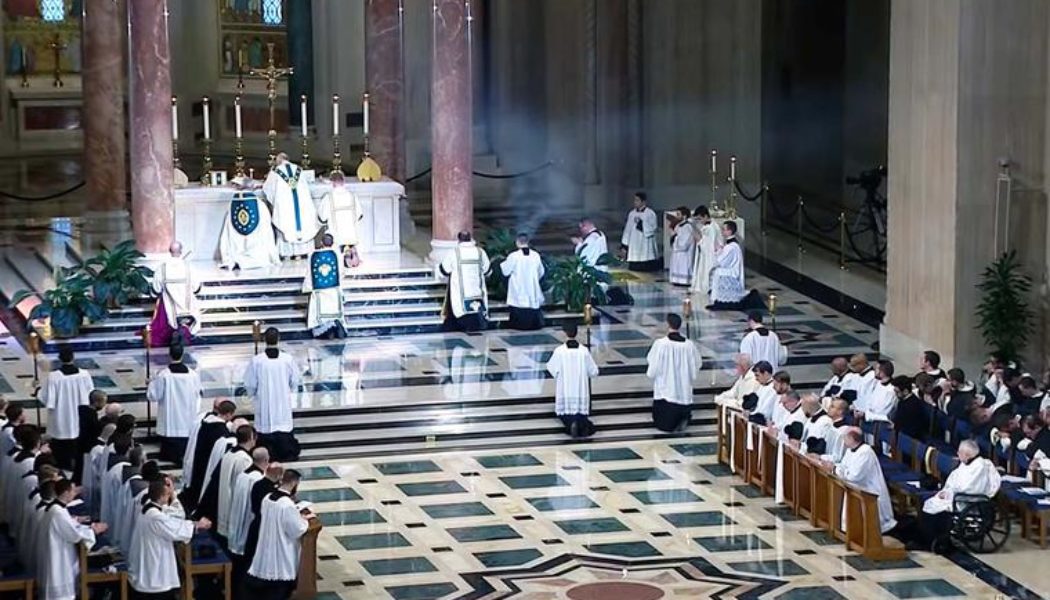 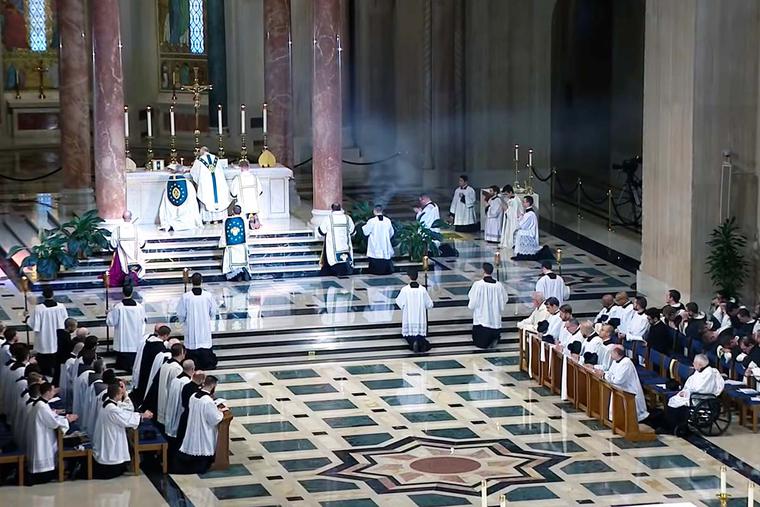 Many have already written well of the concerns and heartache elicited by the Pope’s motu proprio, Traditionis Custodes, which sets strict norms limiting the celebration of the Traditional Latin Mass. I have celebrated in this “extraordinary form” (as well as the ordinary form) for more than 32 years and written often of it. Hence, I seek to add my voice.

I must say that I am grieved and stunned by this document and the letter to the bishops that accompanied it. I think not so much of my own potential loss but of the many Catholics I have served who love the extraordinary form. For so long and in so many places they have often been treated harshly and have been marginalized for their love for the form of the liturgy that most of the saints knew.

Pope Benedict and Pope St. John Paul II sought to heal the rift by gradually normalizing the celebration of the older form of the Roman Rite in the life of the Church. In effect they said to such Catholics, “You are important to us. You are our sons and daughters. Your love for the tradition is legitimate and understandable and we have obligations to care for your spiritual needs and well-being.”

Here in Washington, D.C., the extraordinary form has existed peacefully alongside the ordinary form in approximately 10 of our parishes. We have no parishes exclusively devoted to the celebration of the Latin Mass.

While people on both “sides” may have preferences, even strong preferences, there has been mutual respect and a willingness to make room for one another. Whatever tensions do exist, they are minor and not so different than the tensions that emerge from the diverse mosaic of ethnic communities.

In this diocese Mass is celebrated in dozens of languages. Some of our Eastern Rite liturgies are also celebrated in our Roman Rite parish churches. We also have one parish that hosts the Anglican liturgical tradition and nearly a dozen who host the Neocatechumenal Way liturgy with all its adaptations. Somehow, we all make room for one another and deal with the logistical challenges well enough.

Apparently, Pope Francis does not see this rich and peaceful diversity when it comes to the Traditional Latin Mass. Instead, he writes to the world’s bishops in his cover letter that he sees something very different:

“An opportunity offered by St. John Paul II and, with even greater magnanimity, by Benedict XVI, intended to recover the unity of an ecclesial body with diverse liturgical sensibilities, was exploited to widen the gaps, reinforce the divergences, and encourage disagreements that injure the Church, block her path, and expose her to the peril of division.”

Even if other expressions of diversity may be tolerable or agreeable to him, the Latin Mass seems to be the fly in the ointment. With a special focus that seems overly harsh he attributes blame for divisions to traditional Catholics who attend the Latin Mass.

To be sure, there are some well-known personalities in traditionalist circles who stir up passions about liturgical and other matters, including the authority of the Second Vatican Council. But it is not reasonable to attribute the sins of a vocal minority to an entire movement.

Yes, some people advance the superiority and glory of the extraordinary form. But I know many Catholics from Eastern Rites who think their liturgies are vastly preferable and even superior to the Roman Rite. Many Catholics in the Neocatechumenal Way assert that the Church will not experience reform until their liturgy and their “way” is embraced by all. In African American Parishes where I serve there is a great pride in the joy of their worship and a wonderment at why so many other parishes seem to have “dead” and short liturgies.

People are passionate about what they love, sometimes to a fault, but for the majority, this is human and generally kept within a tolerable range of sparring and bluster rather than disgust and deep division. I fear the Pope is using a cannon to kill a fly.

I also fear that aspects of the motu proprio have caused great hurt and discouragement to many of the faithful and will intensify the very divisions the Pope laments.

First, it carries a harsh and heavy-handed tone. Is it really necessary for the Holy Father to write in such a blunt and authoritarian manner? Consider two quotes, one from the letter, the other from the motu proprio:

“I take the firm decision to abrogate all the norms, instructions, permissions and customs that precede the present motu proprio, and declare that the liturgical books promulgated by the saintly Pontiffs Paul VI and John Paul II, in conformity with the decrees of Vatican Council II, constitute the unique expression of the lex orandi of the Roman Rite.”

“Everything that I have declared in this apostolic letter in the form of motu proprio, I order to be observed in all its parts, anything else to the contrary notwithstanding, even if worthy of particular mention, and I establish that it be promulgated by way of publication in “L’Osservatore Romano,” entering immediately in force and, subsequently, that it be published in the official commentary of the Holy See, Acta Apostolicae Sedis.

This is not the language of mercy. It “abrogates” all prior permissions and “declares” that there is only one form of the liturgy that qualifies for the lex orandi (in opposition to the magisterium of Benedict). It is “ordered” to be observed in all of its parts and nothing is to withstand it. Even worthy arguments must give way. In effect this matter is settled and brooks no delay. It took effect immediately and is now in force.

Pope Francis has seldom addressed any other group this harshly. To others such as unbelievers, dissenters and wayward politicians there is to be mercy, understanding and tolerance. He speaks of “going to the margins” and of compassion for the poor and morally lost. But to those attached to the Latin Mass comes this strong rebuke, with almost no room to maneuver in the Church they love. It is very shocking and saddening to me as a pastor of souls that such vitriol be directed at the flock I have long cared for.

Second, it imposes impossible requirements. On the one hand the Pope delegates to bishops any decision about locations, but then he ties their hands. He writes:

“[The diocesan bishop] is to designate one or more locations where the faithful adherents of these groups may gather for the eucharistic celebration (not however in the parochial churches and without the erection of new personal parishes).”

But if not in parish churches, then where? What is a bishop to do in understanding, let alone applying, this statute? It is hard to interpret the Pope’s instruction in any benign way. He seems to be saying to Latin Mass Catholics, “You are not welcome in our churches.” If so, this is a stunning lack of pastoral solicitude and love and it is very dismaying.

Third, it displays a strange treatment of bishops. While referring the implementation to the local ordinary, he also restricts their pastoral judgment in numerous ways.

Not only are they to forbid the Mass in parish churches, but they also cannot confer faculties on new priests to celebrate the Latin Mass without permission from Rome (Article 4).

Furthermore, they cannot establish new communities (Article 3). Does this refer to locations, oratories, guilds or something else? It’s difficult to determine what this means at all.

So, the bishops are given authority, but with their hands tied, with confusing language and with nearly impossible guidelines to follow.

Now we must look to our bishops and beseech them to exhibit the pastoral solicitude this document seems to lack. They have been given a hard and awkward task. Be careful to pray for them, and try not to embitter them with predictions or presumptions of bad treatment. Many of them have already shown the pastoral sense to avoid the rash and “immediate” implementation of this motu proprio.

Dear bishops, as a pastor of souls, I ask you for a gentle and kind interpretation of it. Traditional Catholics are among the sheep of your flock, and they need a shepherd’s care. Even if the document suggests that they be shuffled off to the margins, I beg you not to do it. This is a vibrant and growing section of the flock. Many young families and young adults, as well as young priests and older folks are depending on you to do what is truly pastoral.

If greater unity is needed, teach us what this means, but please, do not drive us to the margins to live in rejection. Some of us are ornery but most of us are just trying to be good, decent Catholics and stay close to the heart of the Church. Keep us close to you and find room for us in your hearts.

Dear Holy Father, I beg you to reconsider what you have written and to hear the unnecessary pain you have caused. You rightly desire unity in the Church, but I fear that, by this action, you may end up causing far more serious division.

Since my opinion means nothing, I ask you to consider the words of the great rabbi Gamaliel, who said in the Acts of the Apostles (5:38-39):

“So in the present case I advise you: Leave these men alone. Let them go! For if their purpose or endeavor is of human origin, it will fail. But if it is from God, you will not be able to stop them. You may even find yourselves fighting against God.”