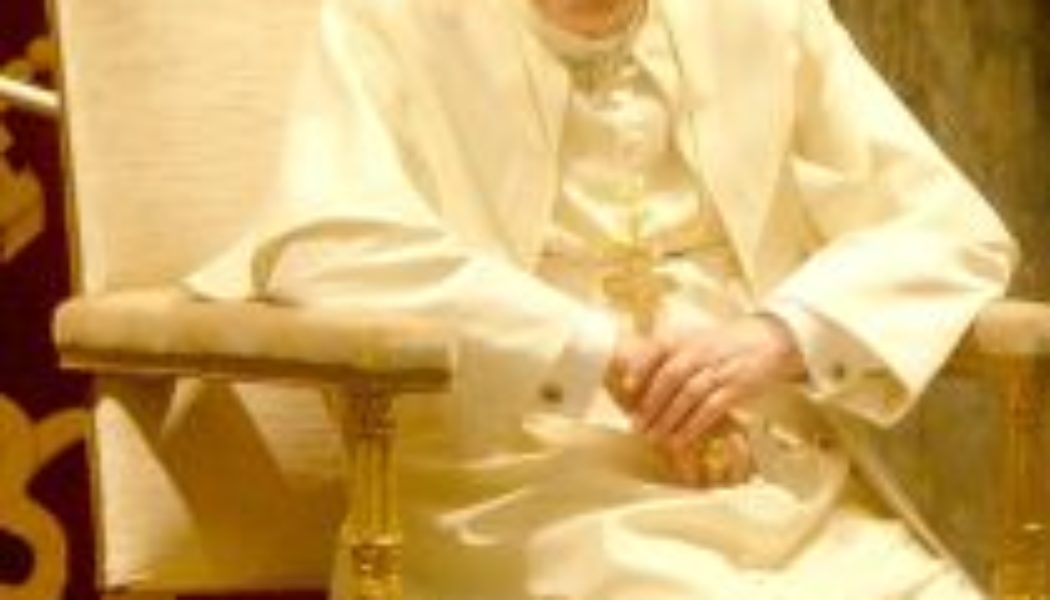 As we recall the legacy of the late Benedict XVI, we would be remiss if we overlooked his theology of the saints as the antidote to the “dictatorship of relativism.”

One of the central ideas throughout the writings of Benedict XVI (Joseph Ratzinger) has been the notion of communio (“communion”), which sees God Himself as a living communion of Divine Persons. Jesus Christ is the personification of the communion between God and humanity. The Church is a sacramental sign of God’s communion in the world and the instrument through which a divided humanity can enter into union with God in Christ. Finally, the eschaton is fully revealed in communio sanctorum – “the communion of saints.”

In a homily for All Saints Day, Benedict XVI affirmed the universal call to holiness, which was reaffirmed by the Second Vatican Council: “Holiness demands a constant effort, but it is possible for everyone because, rather than a human effort, it is first and foremost a gift of God, thrice Holy (cf. Is 6:3)” (1 November 2006). The only solution to the challenge of secularism, relativism, and the skepticism of the modern age is sanctity. Holiness is “possible for everyone” because of the generous gift of grace, which the Holy Spirit bestows upon us via the generous gift of the sacraments.

Sanctity is “first and foremost a gift of God.” Holiness is not something that we can achieve by our own efforts. Whereas modernity would have us believe that the self-willed autonomy of humanity is the way to authentic progress, Christianity teaches us to entrust ourselves to the transformative mercy and grace of God. The autonomous isolated “I” must enter into a communal relationship with the eternal “Thou” and participate in the life-giving love of the Body of Christ.

Communio is synonymous with both the Church and the Holy Eucharist. In his “primer of Catholic ecclesiology,” Called to Communion, Ratzinger noted: “The Church is communion; she is the communion of the Word and Body of Christ and is thus communion among men, who by means of this communion that brings them together from above and from within are made one people, indeed, one Body” (p. 76). Influenced by the French Jesuit theologian, Henri de Lubac, Ratzinger embraced the notion that the Holy Eucharist makes the Church. The Church receives her very identity from the Holy Eucharist. The essence or logos of communion is directed towards the ethic or ethos of self-giving love. St. Luke’s notion of the “breaking of the bread” expresses the “social requirement of the Church,” which Ratzinger describes in Called to Communion as a “life in sharing, in communion with Christ, who gives the gift of his very self” (p.43). The concept of communio helps us to understand the true nature of the liturgy.

The celebration of the liturgy is never simply an isolated cultic act. Liturgy enables the individual person (the “I”) to enter into the worship of the larger Body of Christ (the “we”). Consequently, in his first encyclical, Deus Caritas Est, Benedict could make the claim that the celebration of the Holy Eucharist is intrinsically fragmented unless it passes over into a concrete expression of love for neighbor (§14). Communio is at the heart of the mission of the saint. The universal call to holiness is a call for each person to become a living sacrifice (Rom 12:1).

As we reflect upon the varying challenges in culture and society, we try to come up with a myriad of ways and programs to bring about reform or renewal. In his interview with the Italian journalist, Vittorio Messori, Ratzinger underscored the simple truth that it is the saints who offer us a true path towards authentic reform: “Saints, in fact, reformed the Church in depth, not by working up plans for new structures, but by reforming themselves. What the Church needs in order to respond to the needs of man in every age is holiness, not management” (The Ratzinger Report, p. 53). Managers, Bureaucrats, Politicians, Social Media Influencers, Strategic Planners, etc. have never been the key to ecclesial reform. Faithful disciples, saints who live in communion with the love of Jesus Christ, are always the source of the authentic renewal of the Church.

During his apostolic visit to England, Pope Benedict, in an address to a gathering of students at a sports arena of St. Mary’s University College, maintained that “a good school provides a rounded education for the whole person. And a good Catholic school, over and above this, should help all its students to become saints.” If saints are the key to reform and renewal and culture, then schools should assist its students to make the assent towards the path of virtue through a formation in faith and reason and the generous availability of the grace of the sacraments.

As we recall the legacy of the late Benedict XVI in varying ways, we would be remiss if we overlooked his theology of the saints as the antidote to the “dictatorship of relativism.” The center of Christianity is not an abstraction or an idea – its heart is a living Person: Jesus Christ. Saints are simply sinners, who persevered in the love and grace of Jesus. They have paved the path towards the eternal communio of love. We are grateful that the Lord’s faithful and humble servant in the vineyard, Benedict XVI, consistently directed our gaze towards the gift of communio that the Lord makes available to all through the Church and the celebration of the sacred liturgy.

The featured image is a photograph taken by Sergey Kozhukhov of Pope Benedictus XVI at a private audience (January 20, 2006). This file is licensed under the Creative Commons Attribution-Share Alike 3.0 Unported license, courtesy of Wikimedia Commons.

Domain. Get profitresolution & claim 99% discount. (must see) how to get grants for buying commercial property #1 - real estate lead generation.