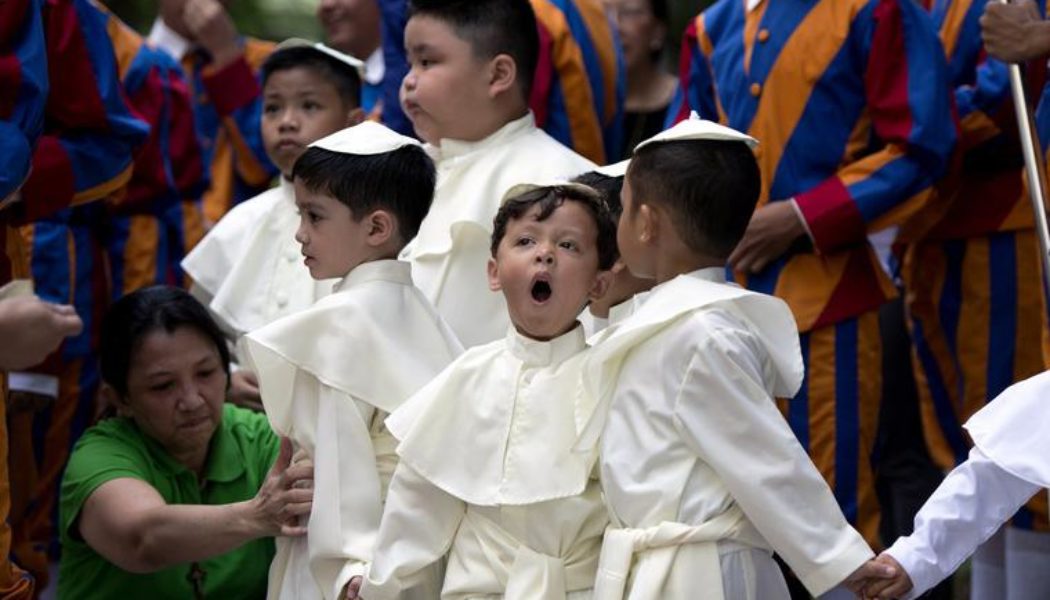 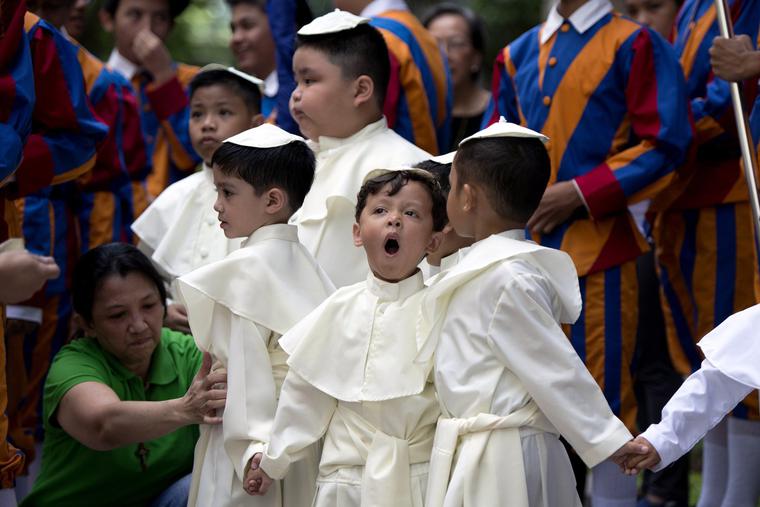 The old man a couple rows ahead of us at Mass kept waving at the two little boys, one maybe 3 and the other maybe 4, sitting in the fourth row, about eight rows ahead of him. Their mother had an infant to care for and he diverted them for a while. Sometimes he waved his hand rapidly from side to side and sometimes flapped it up and down, but he kept their attention for a few seconds each time, and they kept looking back hoping for more.

Later, as their mother nursed the infant, his wife started waving at the boys. She clenched her hand into a fist and then extended her fingers, spreading them out as she did so. She kept doing that until the boys lost interest. She then looked at her husband and smiled. They had given up some of their attention to worship to help a mother in need.

The old couple and the young family sat directly between me and our young priest at the altar, two blessings in one picture. Father Li is very solemn in the proper sense of taking what he’s doing seriously and doing it reverently. He’s also Chinese-American and speaks English as a second language.

If you want to hear the Scriptures or the priest’s prayers afresh, listen to them read carefully by someone who doesn’t speak English as his first language. He emphasizes different words and stresses different parts of the sentence. Then when he preaches you have to pay closer attention to make sure you get everything, especially when he preaches a serious and weighty homily, as he always does.

Did I say the old couple took some of their attention away from worship? Some people would say so. Censoriously. They’d see it as irreverent.

I don’t think that’s right. The man and woman’s kindness to the mother and children was part of their worship, because they were doing Jesus’s work in a small way, and work that needed to done.

That they did well in distracting the children follows from Jesus’ words to the Pharisees, who were apparently waiting on him to do something they could criticize. After healing a man, he asked them, “Is there any one of you who will not pull out his sheep immediately, if it falls into a pit on the sabbath?” Is there anyone who will not try to distract children, if they feel antsy at Sunday Mass?

The old couple didn’t need to be consciously focused every second on Jesus in his work. They didn’t need to hear every word the priest spoke or watch every action he took. The same, of course, for the mother attending to her baby and her older, more active children. Less so, I suppose, for me, but I couldn’t help seeing them and as a writer felt the call to pass on such a charming act of kindness.

I noticed the old couple also because distracting children at Mass is one of my favorite things to do. Not so much by waving, because that can distract people behind me. I blow out my cheeks and suddenly let out the air, or switch the air from cheek to cheek at varying rates of speed and different rhythms. Having a beard seems to make this more entertaining.

Who is it that we meet in the Mass and visit with, as southerners say, in the tabernacle? The challenge, Archbishop Alexander Sample wrote, is that the Catholic Church declares “the Eucharist is really, truly God himself. Not an image. Not a symbol. God.” Does he demand our complete attention, even to the extent of leaving a needed kindness undone? It would seem so.

A story occasionally circulates in Catholic circles of a young man, sometimes described as a Muslim, saying that if he believed that the Host in the tabernacle were really God, he’d throw himself on the floor in adoration and never move. It startles us into seeing what an astonishing belief we claim to hold, as it should.

But it’s not exactly true. It doesn’t cover the whole thing. Yes, our Creator and Savior sits in the tabernacle before us. But he doesn’t stay with us only as the great and mighty king to whom we can only respond by throwing ourselves on the floor.

“I have called you friends,” Jesus said. A person doesn’t lie on the floor in front of his friend, however great a man he is. At least not often. The friend doesn’t want him to. However much a man may defer to his friend, admire him, even venerate him, submit himself to him in all things, they sit across the table and talk. The great man condescends to his friend, in the old sense of giving away the privileges of rank and status.

And that God in the tabernacle created you to live in the world, to do things, to have a place in a family, a circle of friends, a church, a community, a nation. He wants you to be a friend to others besides himself.

If you were to lie on the floor never wanting to get up, you might hear Jesus saying, “Shouldn’t you be getting the kids?” or “If you don’t leave now, you’re going to be late for work” or “You need to get home and feed the dog.” He promises to be with you then, as well. As Jesus said, “When you did it to one of the least of my brethren here” — like a nursing mother with active children — “you did it to me.”

Jesus’ presence in the Eucharist requires us to make a decision, Archbishop Sample wrote. “I invite you to take this moment right here right now and say Yes to his love. It’s yours to claim. Use your freedom to abandon your resistance, to claim the love he is offering you, to claim him in the Eucharist.”

The decision isn’t first the decision to adore, but to accept his love. And to be his friend, and a friend to his friends. Helping others as they need is one way to adore him.

The best thing about Mass when Father Li celebrates comes when he stands up at the end of Mass and says what often sounds like, “Let us play.” With small fidgety children, say.