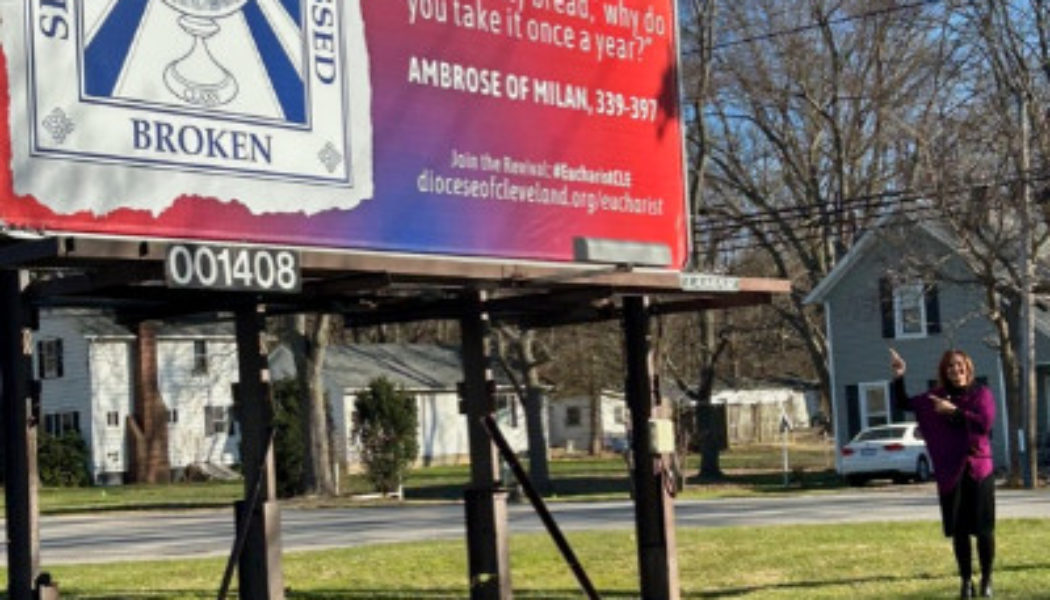 The Diocese of Cleveland is taking the U.S. bishops’ National Eucharistic Revival effort to the streets with 33 billboards that expound 33 faithful quotes from leading Catholics, from St. Jerome to Pope St. John Paul II, about the power of the sacrament. The billboards are present along the highways and byways of the diocese, which borders Lake Erie in eight counties in northeast Ohio. The effort is part of a larger marketing plan that will post new quotes on new billboards during Lent and followed with large gatherings of the faithful next summer, said Father Damian J. Ference, who is the vicar for evangelization and secretary of parish life and special ministries in the diocese.

“We are trying to play some offense out in the world,” Father Ference told Our Sunday Visitor. “People are not used to seeing us out there with the Word. We want to get people talking about the Eucharist.”

It appears to be working, as the billboards are popping up on social media as people are posting photos and commenting about the diocese’s push to make known the revival.

The multi-year National Eucharistic Revival is leading up to the USCCB’s National Eucharistic Congress in Indianapolis, which is scheduled for July 17-21, 2024. As part of the effort, a team of National Eucharistic Preachers has been formed. Dioceses and parishes throughout the country are participating. The initiative was established with the overall goal of awakening a desire among the faithful to encounter Jesus in the Eucharist and to cultivate personal devotion and relationship with him in a way that bears fruit in works of charity.

Father Ference is co-director of the Cleveland diocese’s Eucharistic Revival effort and is acting on the marching orders given to him when he was appointed to the task while studying for his doctorate in Rome in 2021: “Just get the Gospel out anyway that you can, by billboards if you have to,” he recalled being told.

Father Ference, a professor of philosophy at Borromeo Seminary who holds a licentiate in philosophy from The Catholic University of America and a doctorate in philosophy from the Pontifical University of St. Thomas Aquinas in Rome, credits two staff members in the parish life office: Calla Gill, creative program coordinator, and Mary Boneno, executive assistant, with creating the billboards. Gill designed billboards that incorporate the diocese’s new logo and the branding for the National Eucharistic Revival. Boneno, a recent graduate of The Catholic University of America, found the quotes and verified them. “Father Ference gave us a lot of creative freedom,” Gill told Our Sunday Visitor. “He said, ‘I hired you guys for a reason, so run with it.’”

They decided to remove the honorifics from the quotes and to add the dates of birth and death of the speakers to give pause to their audience and to personalize the wisdom of the comments. Most of the billboards are in English but some are in Spanish, Italian and Vietnamese to reach out to the entire population of the diverse diocese.

“I tried to make sure it was a good diverse group,” Boneno told Our Sunday Visitor. “I was choosing from limited options, because the focus must be the Eucharist. I wanted beautiful things said in a unique way.”

Father Ference said a “generous donor” bought the advertising for the diocese to place on 33 billboards — one for “each year of the life of Jesus.”

“This was a really cool project to participate in, especially it being my first job after college,” Boneno said. Gill said when Father Ference first approached her with the idea of designing billboard advertising, “I said, ‘I don’t know how to do that.’ And Father Ference said, ‘Well, figure it out.’”

“I love it,” Gill added. “Now I get to sit back and watch everybody else get excited about it, too. That’s neat.”

The next billboards going up in Lent will feature quotes from parishioners,” Gill said. “We are encouraging people to share their stories about their Eucharistic experience for the billboards that will go up for Lent.”

Ference said the aim is to “build momentum to having Masses and processions in minor league ball parks this summer and to tie in the corporal works of mercy by living out our Catholic faith through Catholic Charities and other groups that help the needy.”

“We are working to get everyone involved in every facet of our Catholic faith.”

Here are the greatest geek gifts ever created by mankind!. Disclaimer. Sustainable.