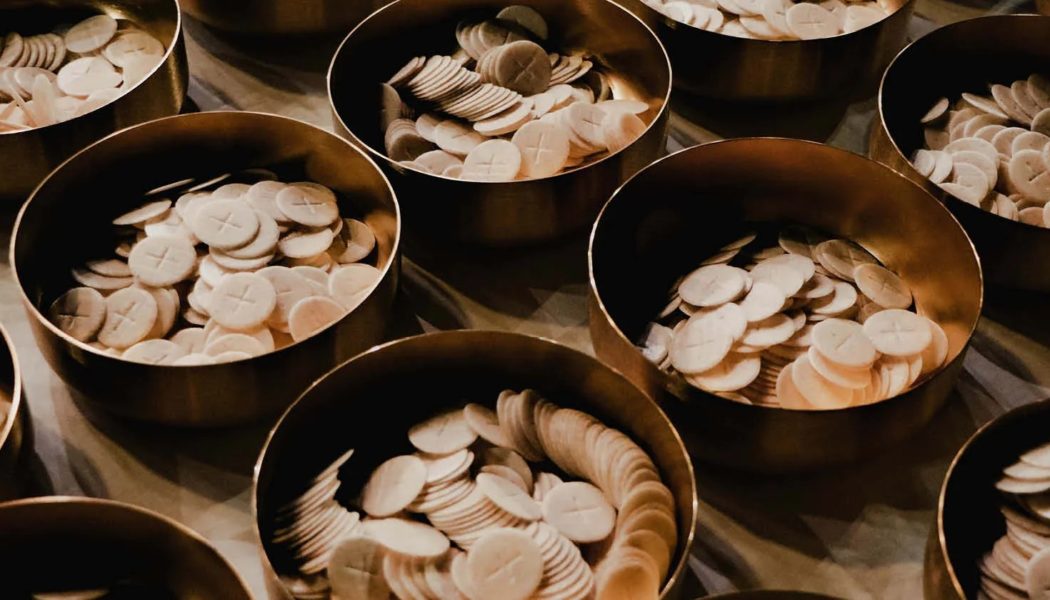 The readings for the Solemnity of the Most Holy Body and Blood of Christ, Corpus Christi Sunday, Year C, give us reason to approach communion with grave fear or great joy. The readings tell us the Eucharist is an ancient mystery, reaching back before the written record of the Jewish religion, and it is a sign of the future glory of heaven.

Depending on how we receive it, its enormous power can renew us or wreck us.

The Eucharist is so important that Jesus does not give it to the multitudes he feeds miraculously.

Notice how Sunday’s Gospel passage, from Luke, begins: “Jesus spoke to the crowds about the kingdom of God, and he healed those who needed to be cured.” Though all four Gospels report the miracle of the multiplication of the loaves, only Luke makes sure we know that it came while Jesus was curing and teaching about the kingdom of God.

The crowd must have felt that the kingdom was starting right then and there. They knew that Psalm 23 says “The Lord is my shepherd; I shall not want. He makes me lie down in green pastures. … You prepare a table before me … my cup overflows.” They knew that Isaiah describes how “On this mountain, the Lord of hosts will provide for all peoples a feast of rich food and choice wines; juicy, rich food and pure, choice wines,” and will “destroy the veil that veils all people,” and “destroy death forever.”

They must have realized the Jesus’s words about the kingdom were being fulfilled in their midst. They saw his cures and then reclined to eat in his “pastures.” That is even more true for us, for whom Jesus himself has become the bread of life, giving us his body and blood.

But why did Jesus give the multitudes bread instead of the Eucharist?

Jesus gave them bread, not his body, for a number of theological and historical reasons — but one reason was that not just anybody can receive communion.

Sunday’s First Reading, from First Corinthians Chapter 11, is older than the Gospel. In fact, according to the way the written texts are usually dated, what St. Paul shares this Sunday are the oldest recorded words of Jesus.

Thus, the first thing we have record of Jesus saying is, “This is my body that is for you. Do this in remembrance of me.”

The earliest Christian writers understood exactly what that meant. “When the Master himself has explicitly said of the bread, ‘This is my body,’ will anyone dare to doubt?” asks St. Cyril of Jerusalem (315-386). St. Ambrose (339-397) said “Before it is consecrated, it is bread; but when Christ’s words have been added, it is the body of Christ.”

San Francisco Archbishop Cordileone has been in the news for making it clear to U.S. Speaker of the House Nancy Pelosi that she may not receive communion. This shouldn’t surprise anyone. If it does, it is because the Church — clergy, religious and laity — has failed to tell people that there are many of us who should not be receiving communion.

In the next lines in Corinthians after Sunday’s reading, Paul adds, “whoever eats the bread or drinks the cup of the Lord unworthily will have to answer for the body and blood of the Lord. A person should examine himself, and so eat the bread and drink the cup. For anyone who eats and drinks without discerning the body, eats and drinks judgment on himself.”

Why did he say that? Because, as St. John Chrysostom (347-407) put it, “someone who profanes the supper is like a person who pours the blood out, making the death appear to be a slaughter and not a sacrifice. It is like those who pierced Jesus on the cross. They did not do it in order to drink his blood but in order to shed it.”

He said “It is unlawful to touch the table with profane lusts, which are more harmful than diseases. By profane lusts I mean those of the body, of money, of anger, of malice, and so on.” For those who “partake unworthily” he said, “holy Communion becomes a means of greater punishment.”

The Church spells how few of us should be receiving communion.

“I therefore desire to reaffirm that in the Church there remains in force, now and in the future, the rule by which the Council of Trent gave concrete expression to the Apostle Paul’s stern warning when it affirmed that, in order to receive the Eucharist in a worthy manner, one must first confess one’s sins, when one is aware of mortal sin.”

The U.S. bishops got specific in their 2006 document, “Happy Are Those Who Are Called to His Supper: On Preparing to Receive Christ Worthily in the Eucharist.” The bishops pointed out that communion is not just for Catholics only, but for only those Catholics who:

The statement even spells out some common serious sins that put us in a state of mortal sin when we do them deliberately, knowing they are wrong.

Cardinal Joseph Ratzinger, who became Pope Benedict XVI, told the U.S. bishops conference president in 2004 that pro-abortion politicians should be denied communion, and Cardinal Jorge Bergoglio, who is now Pope Francis, agreed, in the 2007 document he edited for Latin American bishops. The Bergoglio “Aparecida Document” says:

“We should commit ourselves to ‘eucharistic coherence,’ that is, we should be conscious that people cannot receive holy communion and at the same time act or speak against the commandments, in particular when abortion, euthanasia, and other serious crimes against life and family are facilitated. This responsibility applies particularly to legislators, governors, and health professionals.”

There is more to receiving communion worthily than just the rules, and The Liturgy Guys podcast describes that well, here. But the rules are important too.

These rules guard communion so that it can do miracles in our lives.

With regard to communion, “When we are judged by the Lord, it is for education, so that we may not be condemned along with the world,” wrote St. Cyril of Alexandria (150-215).

And what we need to be educated about is the great miracle communion will work in our lives.

The Psalm for Corpus Christi Sunday Mass, Psalm 101, is a remarkable prediction of Jesus Christ. “Before the daystar, like the dew, I have begotten you,” it says, and adds, “You are a priest forever, in the line of Melchizedek.”

Melchizedek (the name means “king of righteousness”) is a mysterious priest in Genesis who offers bread and wine for Abraham. He is the first priest mentioned in the Bible, and he comes long before the Jewish priesthoods of Aaron and Levi are established. Melchizedek is therefore an example of religion before Scripture. Human beings existed long before recorded history; the stories in the Bible are actually very recent in the grand sweep of human existence. Melchizedek is a sign of God’s care for human beings before he chose his Chosen People.

Thus, in Psalm 101, Jesus Christ is predicted — a king from before the dawn of time who will outlast time, and a priest from before priesthood whose sacrifice will end all sacrifice. The Eucharist, then, connects us to a primal, eternal power — the logos and telos of the world. If we receive it unworthily, we pit ourselves against the deepest meaning of the universe. If we receive it properly, we tap into the most fundamental power that exists.

This isn’t an out-of-reach mystical concept. Its meaning is shown in the story of the multiplication of the loaves, and we see it every day. In the Gospel, the miracle came when the Apostles who wanted to send the crowd away served them with Jesus instead. For us, it happens whenever we serve our family or our neighbors instead of avoiding them. We see our pittance of self-gift multiplied.

“Let no one say, ‘I do not possess suitable means; what I can do is altogether trifling,’” St. Cyril of Alexandria said. “The Savior will multiply the little you have beyond expectation.”

The same applies to our small efforts to evangelize. We have few recorded words of Jesus, compared to Plato, Aristotle, Julius Caesar or Cicero, but “From a few discourses, he ministered abundant nourishment to all peoples,” as St. Ambrose put it. “He gave discourses to us like loaves that are doubled when they are poured forth from our mouths.” The same happens to our words when we say them with him.

So, confess, prepare, and receive communion worthily. Then put the sacrament to work in service and evangelization. You will be astonished by what you accomplish.