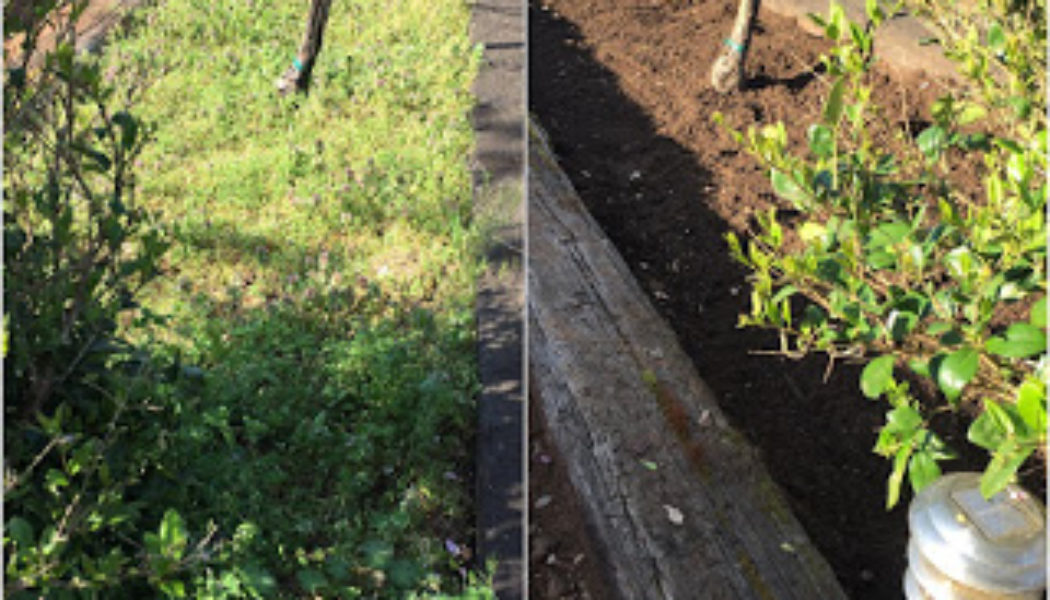 I sat, kneeled, and squatted until my muscles ached and burned from fatigue. My nails, even when covered with gloves, became encrusted with earth. The sun beat on my back. Sweat trickled down my neck. I, the greenthumb’s daughter, was gardening for the second weekend in a row. Let’s be real: I never voluntarily garden.

What overcame and motivated me the previous Saturday remains a mystery. As I labored through the repetition of digging, shaking off excess dirt, and throwing weeds into the wheelbarrow, I began to slowly enjoy the process. I started at one end of the raised bed, infested with weeds, and painstakingly worked my way to the other end.

The first weekend I spent close to 4 hours weeding—figuring out what process worked the most efficiently and fastest. It was arduous work. About two hours into the job, I hit a groove. I began to see the clearing of the pesky growth. It motivated me further. I didn’t seem to care how long it was going to take me to clear the whole bed, by golly, I was going to do it. And at last, after 4 hours, I finished. The bed was cleared of that which hindered true growth.

The following weekend, I again engaged the task and tackled the second raised bed. This time the process came with ease. To my surprise, I was gardening, and I liked it.

When I visited my beautifully cleared beds this past weekend, God whispered into my heart and reminded me of the passage of Scripture in Matthew 13:3-8 that shares about sowing.

The ground in my family’s garden had been choked up. It took a gardener’s concerned and dutiful hands to clean up the mess and produce good soil. After tending to the beds, the apple trees began to blossom. They had desperately needed help in order to bloom and flourish.

God, much like a gardener, tends to the mess choking our hearts. He lovingly and painstakingly will weed away the sin, even the sin that is deeply rooted. He will continually do so each and every time we come to Him and ask. No questions asked. He meets us with His spirit and gets to work pulling out the sin and junk that hinders us. He cleanses the deep rooted lies, beliefs, and sins so that we may display His beauty. We stand eyes fixed upon Him and we thrive. Instead of being drained by entangling sin, life begins to flow in us, and from us as we serve Him and His people.

Let’s be real: We need to come to God with our messy hearts and rubbish. He is the one who can do the work of cleaning up our lives. Will we be willing to let Him take His time in doing so?

Readers, What might God be trying to remove from your life right now, so that you may grow?

Sarah Dohman is a nurse, kayak enthusiast, coffee addict, microbrew lover, globetrotter, adorer of friends and family. She has a weakness for donuts, runs in 5K races, and cannot get enough tea and books. She loves writing more than talking (and she talks a lot), can be seen at Target frequently, and is loving life in her thirties. She believes God has called her to this space to bring joy and encouragement through words to friends and family, near and far. You can find more from Sarah on Instagram.