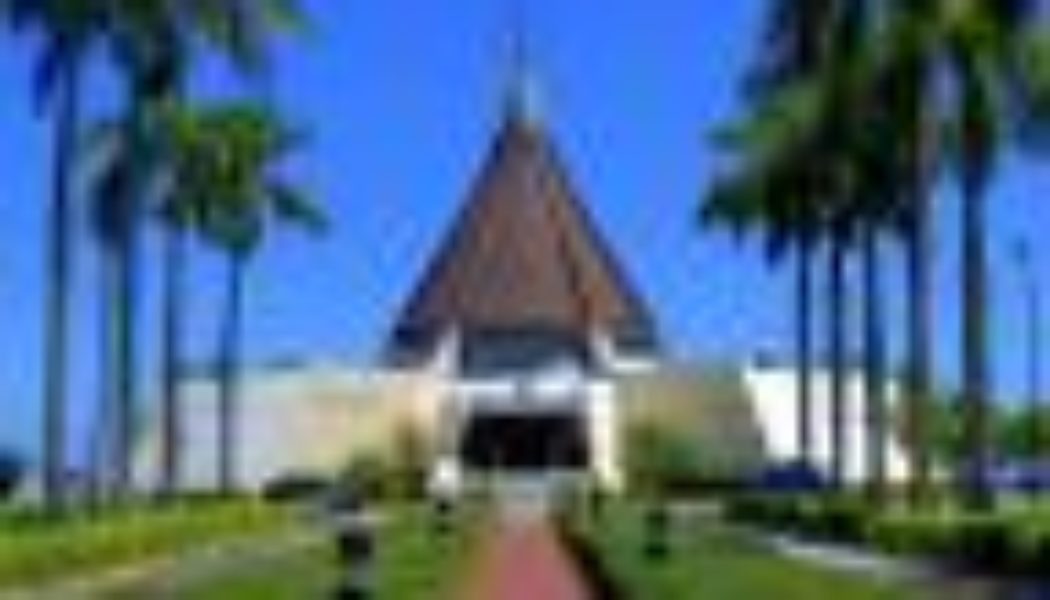 The National Shrine of Our Lady of Charity takes a conical shape, emulating Mary’s spreading mantle.

Tiled rendering of Our Lady of Charity greets visitors inside the front doors of the shrine.

A mural of famous Church and Cuban leaders towers above the altar.

Centerpiece of the shrine is the replica of Our Lady’s statuette, smuggled out of Cuba in 1961. A Cuban flag has been pinned to her mantle.

Above the statuette is a larger rendering of Mary with the Christ Child.

Mary stands seaside in a full-width window in the small chapel. Flanking her are typical Marian symbols: a fiery heart for her spiritual zeal, and a white lily for her purity.

Also in the chapel are two windows with a chalice, wheat and grapes, the elements of the Eucharist.

Also in the chapel are two windows with a chalice, wheat and grapes, the elements of the Eucharist.

Around the crown of the roof are slitted windows on the life of Mary. In the first window, Gabriel announces that she has been selected to bear the Son of God.

The Bethlehem star shines onto the Nativity.

Simeon blesses the Christ Child at the Temple in Jerusalem.

The Holy Family flees to Egypt.

Mary soars into heaven in her Assumption.

Mary is crowned queen of heaven.

Life-size statue of the late Bishop Agustin Roman, founder of the shrine, gazes toward Biscayne Bay.

Bishop Roman, himself a Cuban refugee, spearheaded the fundraising campaign to build the shrine. He then served there until his death in 2012.

Bishop Roman is also honored in a tiled portrait.

St. Pope John Paul II is the subject of another tiled portrait. He crowned Our Lady patron saint of Cuba in 1998.

St. Antonio Maria Claret, the 19th century archbishop of Cuba, gestures toward Our Lady of Charity.

Even a holy water font recalls the story on how the statuette of Our Lady of Charity was discovered.

A solemn stone image of Our Lady stands outside the north wall of the shrine.

Devotees lay sunflowers at the statuette’s feet. Yellow is associated with Our Lady of Charity.

On the grounds outside the shrine, the sculpture “Virgen La Caridad” takes a more abstract view of Our Lady’s statuette.

At the shrine’s gift shop, the statuette is available in a broad variety of styles and colors.

Some visitors also pay respects at an image of St. Lazarus, whom Jesus resurrected. Many Cubans have a special devotion to him.

MIAMI | A mysterious floating statuette – or rather, the Lady it portrays – has reached across four centuries and thousands of miles to unite Cubans in patriotism, peoplehood, Christian faith and Marian devotion.

Our Lady of Charity, whose feast day falls on Sept. 8, is honored at the Vatican, in Washington, D.C., and in her original shrine in El Cobre, Cuba – and, for Catholics in South Florida, at the National Shrine just south of downtown Miami.

Her story began on the Bay of Nipe, near Santiago, Cuba. In 1612, three young men – two Indians and a black slave – sailed out to collect salt for preserving meat at a slaughterhouse. On their way back to shore, a storm sprang up and threatened to destroy their boat. Then the sea miraculously calmed, and the three saw a white object on the water. 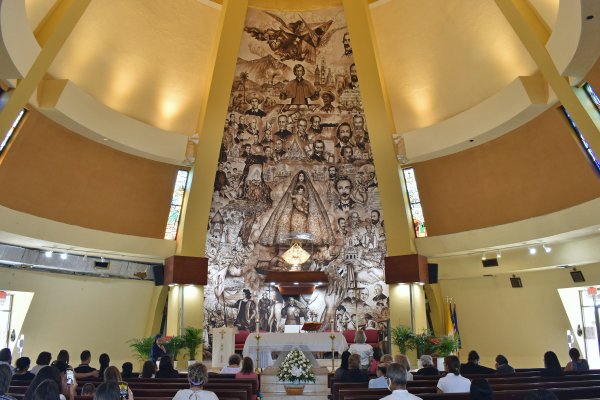 A mural of famous Church and Cuban leaders towers above the altar.

It turned out to be a statuette, about 16 inches tall, of a crowned woman clothed in white, cradling a child. The board bore an inscription: “I am the Virgin of Charity.” And despite the torrent, the statuette was dry.

The youths – who have since been dubbed The Three Juans – brought the image to shore, convinced Mary had rescued them. A chapel was built for her, and the devotion grew, even including bishops across Cuba. In 1916, Pope Benedict XV declared her the patroness of Cuba.

Fidel Castro’s revolution of 1959 dealt a body blow to religious freedom in Cuba. The government seized churches, expelled 130 priests and a bishop, and curtailed church activity. Hundreds of thousands of people fled, carrying their love for Mary wherever they landed.

The Church aided their dedication by smuggling a replica of Our Lady of Charity out of Cuba through the Panamanian embassy, then to Miami. Thirty thousand Cuban exiles gathered to celebrate in 1961. 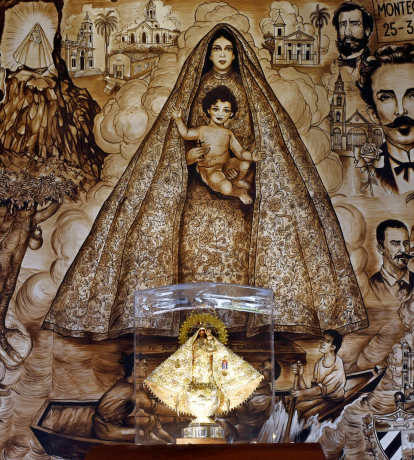 Above the statuette is a larger rendering of Mary with the Christ Child.

Year by year, Our Lady of Charity’s images – both in Cuba and in Miami – have gained prominence as social and spiritual focal points.

The original statuette was crowned in 1936 during the Eucharistic Congress in Santiago, Cuba. In 1977, Pope Paul VI named the shrine in El Cobre as a basilica.

Two decades later, Pope John Paul II followed up by crowning the image as queen and patron saint of Cuba. He had already seen her in 1987 at his private chapel during his visit to Miami.

Pope Benedict XVI paid a visit to El Cobre in 2012, an event shared via simulcast at the Miami shrine. Finally, a replica of the statuette was placed in the Vatican Gardens in 2014, and Pope Francis said the first-ever papal Mass at El Cobre’s basilica the following year.

Our Lady of Charity is honored also at the National Shrine of the Immaculate Conception in Washington, D.C. She’s represented at a church in North Padre Island, Texas. Even Ernest Hemingway mentioned her in his novel The Old Man and the Sea.

“The British have their queen, the Cubans have La Caridad,” according to Bishop Felipe Estévez, himself a Cuban exile, who recently retired as bishop of St. Augustine.

In 1966, then Bishop Coleman F. Carroll asked the Cuban community to build a shrine for Our Lady, donating land for it on Biscayne Bay. The fundraising campaign fell to Father Agustin Roman, one of the priests expelled by Castro.

The cornerstone was laid in 1967, and the building was dedicated in December 1973. Father Roman was ordained an auxiliary bishop in 1979, the first Cuban to become a bishop in the U.S. 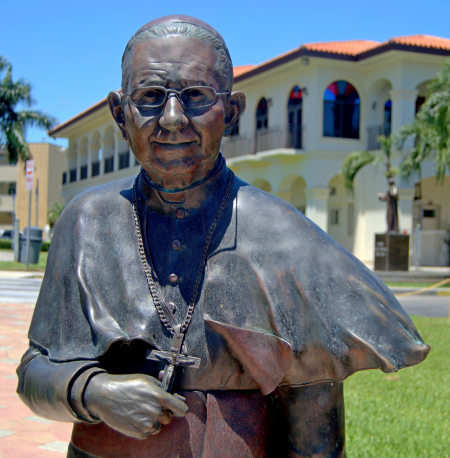 Bishop Agustin Roman, himself a Cuban refugee, is honored in a life-size statue at La Ermita. He spearheaded the campaign to build the shrine, then served there until his death in 2012.

Bishop Roman continued saying Mass at the shrine after his retirement in 2003. He died in 2012, but a life-size metal statue of him still watches over the grounds.

The bishops of the United States named the Miami site as a national shrine in 2000. For local devotees, it often goes by La Ermita, or The Hermitage.

Standing 90 feet high and 80 feet wide, the building takes a conical form, emulating the spreading mantle of the statuette herself. Six columns represent the six traditional provinces of Cuba. Under the altar is a blend of earth, stone and sand from across the island, cast with water brought from a refugee raft.

Behind the altar, the main mural, painted by Teok Carrasco of Nipe, reaches nearly to the apex. Cuban historical figures surround both the replica statuette and a large painted rendering of Mary.

Nearly 50 years after its dedication, La Ermita remains a place of prayer, pilgrimage, even social gathering. The shrine receives visitors every day for Mass, confession and catechesis. On weekends, many people make a mini-pilgrimage of it.

Families, young couples and the elderly alike attend Mass, often hanging around afterward. Some take selfies in front of the mural, stroll around the grounds, or grab a bite at the Kiosko Los Tres Juanes canteen.

Some visitors buy statuettes of Cachita, as she is sometimes nicknamed, in great variety of sizes and colors, at the shrine’s store. Others place sunflowers – yellow has long been associated with her – before a stone replica of the statuette outside.

“Cachita has stood by all of us, no matter our differences,” says Emilio Cueto, author of a book about her cultural influence. “She unites us. She is Cuba.”

Mary stands seaside in a full-width window in the small chapel. Flanking her are typical Marian symbols: a fiery heart for her spiritual zeal, and a white lily for her purity.