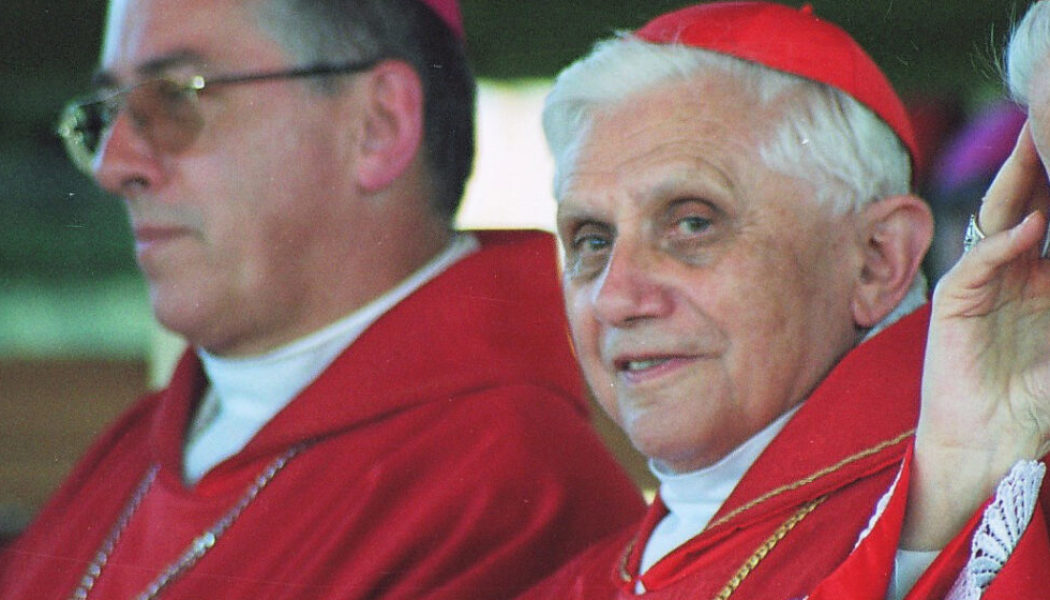 After my first year as a graduate student at the University of Notre Dame, I had the chance to meet then-Cardinal Joseph Ratzinger in person. I attended his small Mass for a group of about 25 German pilgrims in the Vatican and got to receive Holy Communion from him. After Mass, he knelt alone in prayerful thanksgiving. As he arose from prayer, I approached him, along with a couple other graduate students. I wasn’t sure what to expect. At that time, after only Pope John Paul II and Mother Teresa, he was the most well-known Catholic in the world. He had no entourage, no security, and no plan to start his day with lowly graduate students.

We introduced ourselves, and then he asked us individually about our studies. I’m sure he must have had much to do, a schedule packed with meeting those who hold high offices, but he took his time with us and commented generously about our embryonic academic undertakings. The words of Francis X. Maier capture my own experience of meeting the future pope Benedict: I “wasn’t prepared for his personal simplicity and humility. He gave no hint of impatience in his manner, no divided attention, no self-important ego. That can be said of few public figures.” Cardinal Ratzinger took his leave, and I was impressed that the man holding the second most important office in the Church would take so much unscheduled time to speak with three students.

Why did I want to meet him? When I was at Boston College, a kind priest gave me a copy of Ratzinger’s book The Ratzinger Report: An Exclusive Interview on the State of the Church. In this slim volume, I found clear, compelling, and concise answers to so many questions that I had about God, Jesus, and the Church. It was, for me, a pivotal change in my understanding of so many issues. Ratzinger’s answers reflected a mastery of Scripture, early Church writings, and contemporary forms of thought. Later, I was to read Salt of the Earth, another and even better book-length interview with the future pope that explored both his life and innumerable questions of contemporary interest.

The more I’ve learned from this man and about the man, the more impressed I’ve become. He did not want to become a bishop, yet said yes to this invitation to serve in a new way. He tried, more than once, to step down from his office as prefect of the Congregation for the Doctrine of the Faith, but said yes again when St. John Paul II asked him to remain in his position.

Finally, after the death of St. John Paul, Joseph Cardinal Ratzinger gave the homily at the Mass for electing the new pope. All the cardinal-electors heard his words, “Today, having a clear faith based on the Creed of the Church is often labeled as fundamentalism. Whereas relativism, that is, letting oneself be ‘tossed here and there, carried about by every wind of doctrine,’ seems the only attitude that can cope with modern times. We are building a dictatorship of relativism that does not recognize anything as definitive and whose ultimate goal consists solely of one’s own ego and desires. We, however, have a different goal: the Son of God, the true man. He is the measure of true humanism.” As one commentator noted at the time, Ratzinger was not “campaigning for the papacy. . . . I think this homily shows he realizes he’s not going to be elected.” Cardinal Ratzinger wanted to return to the quiet life of a scholar.

After the votes for pope were counted, he was asked, “Do you accept your canonical election as Supreme Pontiff?” Despite his advanced age of 78, despite desiring to retire to writing and study, he again said yes.

As pope, he continued to serve the whole people of God in so many wonderful ways. Although he was not one who by nature enjoys being in the spotlight, he traveled some 60,000 miles on twenty-four trips to six continents to communicate the Gospel. He continued also to write such eloquent and important works to confirm the faith of his brothers and sisters in Christ. I think especially of his beautiful encyclical God is Love and his three-volume work, Jesus of Nazareth.

Even in leaving the chair of St. Peter, he taught me yet again a lesson in humility and courage. He listened to God’s call in prayer and was willing to do what he was convinced in conscience that God asked him to do, even though a papal resignation had not occurred in almost 600 years. Yet again, he said yes to his best understanding of God’s call for him.

Expert hosting reviews and advice. Profit by tapping into giant $324b affiliate blogging & product review industry . How to create real estate business cards that engages prospects and sells your service or product.