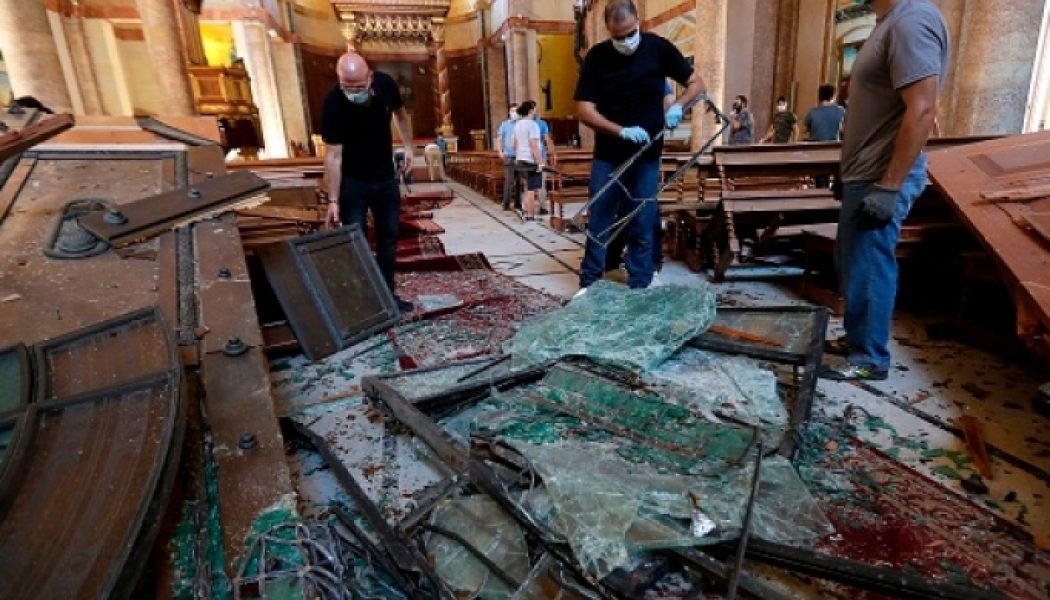 A picture shows destruction inside St. George Maronite Church amid recovery efforts on Aug. 5, in the aftermath of a Aug. 4 massive explosion in the Lebanese capital of Beirut. (Joseph Eid/AFP via Getty Images)

‘No One Has Experienced This’ in Lebanon: Beirut Blast Unleashes National Catastrophe

The only Middle East country with a Christian head of state is now in an unprecedented state due to a harbor explosion of chemicals more destructive than wartime devastation.

BEIRUT — A terrifying chemical explosion in Beirut’s harbor felt as far away as Cyprus has shattered the city and ripped a hole in the heart of Lebanon.

Scores of men and women are now dead and thousands more injured. The government’s preliminary report has ruled out terrorism or an act of war, but blamed a warehouse fire that reached highly explosive chemicals left unsecured for six years in the port and detonated them with such force it left a brief mushroom cloud to hang over the city.

Michel Constantin, regional director for the Beirut-based office of the Catholic Near East Welfare Association (CNEWA), a Pontifical Mission, told the Register in a mobile phone interview no one has experienced this kind of explosive destruction in Lebanon — even in wartime.

The city’s economic gateway to the Middle East is destroyed. Lebanon faces a food crisis on top of its political, economic and financial crises. Humanitarian aid is desperately needed, and the world must act now for Lebanon; without it, the devastation of Beirut may ripple throughout the Middle East and beyond, Constantin explained.

Michel, can you tell us about the explosion in Beirut on Tuesday?

It’s like an earthquake. Even in Cyprus [145 miles away], they felt it. Beirut is half destroyed now.

We don’t know yet what kind of material has exploded. At the beginning there was some speculation that Israel bombarded storage for Hezbollah; but I don’t think so; they [Lebanon and Israel separately] confirmed that they [Israel] have nothing to do with it. So now the main story would be some nitrate ammonium materials were stored apparently in the harbor of Beirut and exploded. There’s a huge quantity of this material. The destruction is huge.

What kind of destruction are we talking about?

We have many hospitals which were evacuated due to the damage. One of them is a big hospital, St. George, run by the Greek Orthodox. It’s one of the biggest hospitals in Lebanon. It was evacuated; they don’t have any electricity. They sent away all the patients to other hospitals.

The hospitals are full, and there are no more places to put people. Whether it’s the American University of Beirut’s hospital, or the Hôtel-Dieu, which is the French hospital of St. Joseph’s University, all the hospitals are fully packed. They’ve each received 500 injured persons, and they cannot receive more.

The destruction is amazing. There is no electricity in Beirut. The regular telephones are cut. Even the mobile phones were damaged, as well, in some areas. Beirut is not reachable by phone; some roads were closed due to the glass that was broken in all the buildings, and it’s blocked the roads. So Beirut is now in a miserable state.

How bad was the scale of the blast in Beirut? What can you compare it to?

They say it’s equivalent to an earthquake, equivalent to 4.5-5 on the Richter scale. The latest news I have heard is that since it took place inside the harbor of Beirut, it damaged the storage of wheat for the country. So we might have another bread crisis.

But it looks very bad; even during wartime, we’ve never had an explosion of that scale.

Not even the big explosion that took the life of [former Prime Minister Saad] Hariri was this powerful. That was 1,000 kilograms [TNT] concentrated in one car; yet the sound was much less, and the damage was much less.

The presidential palace in Baabda, which is very far from the harbor, was damaged. The Beirut airport was damaged. We have broken glass in Jounieh [10 miles north of Beirut]. So can you imagine how huge it is?

The fires are still going on, with all kinds of storage, in the harbor. But the biggest damage is the wheat storage, which is the only wheat storage for the whole country. We don’t really produce any wheat: We import [90%] from outside, and the strategic reserves of wheat are stored in that area.

Yes, they have started talking about the prices and availability of bread.

How could the port’s explosion impact Lebanon’s political, economic and financial situation? The country has been going through multiple crises.

It will hit badly the economy, because we are already in a crisis. We have a big deficit in the central bank’s reserves of U.S. dollars and foreign currency. This has made the level of imports from outside drop substantially.

The coronavirus was an additional layer that makes this situation more complicated.

And now, with the damage hitting Beirut … to relaunch the economy would be a miracle. It would take a lot of time. I don’t know if the government has the capacity [on its own] to repair the damage to make Beirut harbor operational again. And there’s concern Beirut will lose its role as being the main harbor for imports, not only for Lebanon, but also for many Arab countries who rely on Lebanon.

So this is a big hit that is attached to the whole commerce cycle of Lebanon and the whole role of Lebanon as a transit route for the Middle East. It will affect Syria, as well, as Lebanon is important for the Syrian economy.

What’s the direct impact on the Christian communities of Lebanon, and what has their response been?

I cannot say the impact on Christians was more than on Muslims. It is the same. We’re all on the same boat.

The explosion was so big and so huge for us that it damaged the whole city; not only the surrounding vicinity [of the blast], but the whole city miles away from the harbor was damaged.

The damage is vast. We have two hospitals — one in Gemmayzeh operated by the Rosary Sisters. It was evacuated, as the damage was so huge. They cannot keep any patient inside. And now the whole vicinity of the hospital was evacuated.

The same for Beirut’s Orthodox hospital: St. George Hospital. One of the largest and most important hospitals in the Middle East is damaged. It’s completely out of electricity: There is no activity, no communication inside it, and they had to evacuate it. This hospital had 500 to 600 beds. This is a real loss for Beirut at this critical time of coronavirus and this disaster.

What kind of mobilization of the international Christian community is needed right now for Lebanon? How can we act to support Lebanon right now?

We’re preparing with CNEWA’s office in New York ideas for some projects, based on serving the actual needs of the Church. We need to sustain the institutions of the Church, namely the schools and the hospitals that are serving the whole population, Christians and Muslims, in Lebanon.

They need support to be able to continue for the coming years.

We need to provide direct funds to maintain the huge equipment of the hospitals to keep them running, because they need spare parts from outside. They don’t have enough cash, or U.S. dollars, because all their money in the bank is locked out. They cannot have access to funds to import what they need.

They need fresh funds from outside to be able to import what they need to acquire spare parts for their machinery and keep running their medical equipment.

The schools, also; they need scholarships for 40%-50% of the students whose parents were forced to leave their jobs; they’re jobless now, and they don’t have any income. The schools cannot continue paying the salaries of the teachers.

We have 350 schools in Lebanon for the Church. We have 14 or 15 hospitals for the Catholic Church, and we also have a number of non-Catholic hospitals, Orthodox, Protestant and other communities. So all these institutions are very important, not only for the Christian community, but for all Lebanon, and they need support.

We’ll keep the people of Lebanon in our prayers and encourage people to do what they can to help. Is there any final thought you can share about this catastrophe?

The situation is very challenging, not only for poor people, but also for the middle class. … The unemployment rates are getting higher and mainly hitting the middle class, who are losing their jobs. Also, the huge devaluation of the Lebanese pound: For those who are working, they have lost 80% of their purchasing power. This is a huge challenge now, because they need to repair their homes, and they don’t have hard currency.

Even the rich people, who have deposits in the bank, they cannot have access to those deposits now due to capital controls by the bank. It’s undeclared capital control, but if you go to the bank, and you have a million dollars in the bank, they will only give you $1,000 a month. So your income is practically $1,000 a month, even if you only have $1-2 million in the bank, making you also suffer, even if, theoretically, you are a rich person. All the classes are suffering, the whole country is suffering, and this is another challenge on our capital, to be able to repair the damages. They’re not assessed yet, but they’ll be huge.

Right now, the number of victims is getting higher. Every minute the number is getting higher and higher. The final count, we don’t know yet. Some people are under the destroyed buildings. The army and the civil defense forces are trying to save some lives.

This interview is edited for length and clarity.

Reporter’s Note: You can support the efforts of the Catholic Near East Welfare Association here.