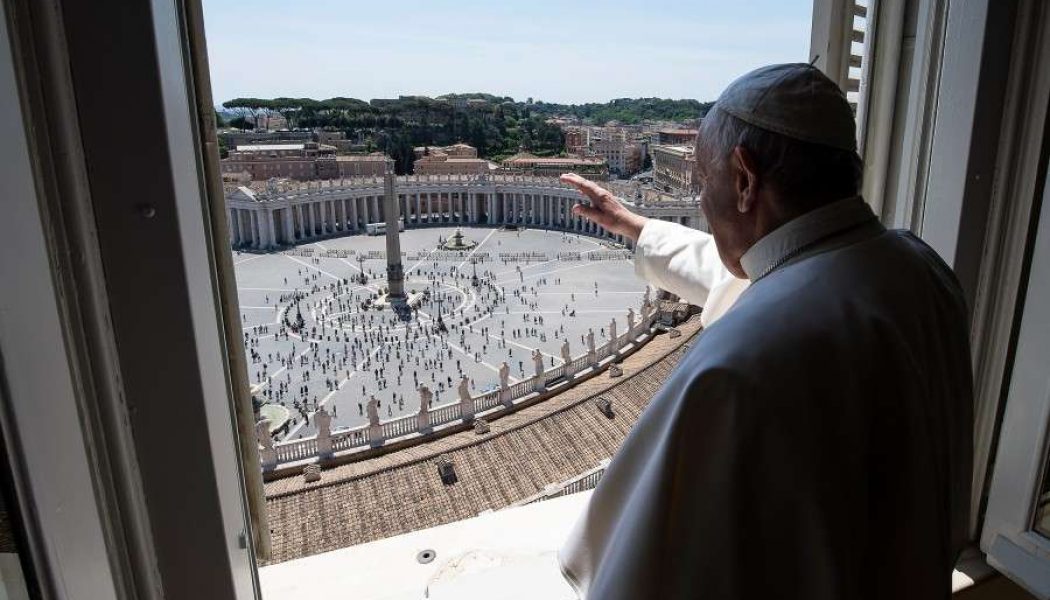 Vatican City, May 24, 2020 / 05:45 am MT (CNA).- Pope Francis Sunday entrusted China to the Blessed Virgin Mary, and asked people to pray for a new outpouring of the Holy Spirit upon the most populated country in the world.

“Dear Catholic brothers and sisters in China, I wish to assure you that the universal Church, of which you are an integral part, shares your hopes and supports you in trials,” Pope Francis said May 24 after the Regina Caeli prayer.

“It accompanies you with prayer for a new outpouring of the Holy Spirit, so that the light and beauty of the Gospel, the power of God for the salvation of whoever believes, can shine in you,” the pope said.

“We entrust the pastors and faithful of the Catholic Church in that great country to the guidance and protection of our Heavenly Mother, so that they may be strong in faith and firm in fraternal union, joyful witnesses and promoters of charity and fraternal hope, and good citizens,” Pope Francis said.

“May Our Lady always guard you!” he added.

In his Regina Caeli address, the pope reflected on the words of Jesus recorded in Gospel of Matthew for the feast of the Ascension of the Lord: “Go therefore and make disciples of all nations, baptizing them in the name of the Father, and of the Son, and of the Holy Spirit, teaching them to observe all that I have commanded you.”

China is home to more than 10 million Catholics, with six million registered as members of the Chinese Catholic Patriotic Association, according to official statistics.

The Holy See and the Chinese government signed a provisional agreement in 2018 on the appointment of bishops in the state-sponsored Church, the terms of which have still not been publicly released. In the wake of the deal, previously excommunicated bishops of the Chinese Catholic Patriotic Association, which is overseen by the Communist Party, were received into full communion with the Vatican.

A report published in 2020 by the U.S. China Commission found that Chinese Catholics suffered “increasing persecution” after the Vatican-China deal. It said the government was “demolishing churches, removing crosses, and continuing to detain underground clergy.” Priests and bishops have reportedly been detained or have gone into hiding.

Earlier this week, the Vatican revealed that Catholics in China were able to use the most popular Chinese state-monitored social media platform, WeChat, to livestream Pope Francis’ daily Mass during the coronavirus pandemic.

It is unclear whether Catholics in China were also able to watch the livestream of this Sunday Marian prayer for their country on WeChat due to the heavy censorship of all Chinese online media.

Pope Benedict XVI established the custom of praying for China on the Marian feast of Our Lady Help of Christians in 2007, and composed a prayer to Our Lady of Sheshan for the occasion.

Pope Francis entrusted to the intercession of Mary Help of Christians all Christian disciples and people of good will who are working for peace, dialogue between nations, service to the poor, and the custody of creation.

The pope also marked the fifth anniversary of publication of his environmental encyclical, Laudato si’. He said that he wrote Laudato si’ to “draw attention to the cry of the Earth and the poor.”

Pope Francis spoke during his Regina Caeli address via livestream video recorded in the library of the Vatican’s Apostolic Palace. However, for the first time in more than 10 weeks, people were allowed to be present in St. Peter’s Square when the pope appeared in the window to give a blessing.

Each person who entered the square was required to wear a face mask and security enforced social distancing for the people gathered outside of St. Peter’s Basilica, which reopened to the public on May 18.

After more than 5 million people around the world have been documented with COVID-19, the pope asked Our Lady Help of Christians to intercede “for the victory of humanity over every disease of the body, heart, and soul.”

“The feast of Ascension tells us that Jesus, although he ascended into Heaven to dwell gloriously on the right hand of the Father, is still and always among us for us to derive strength, perseverance, and our joy,” Pope Francis said.