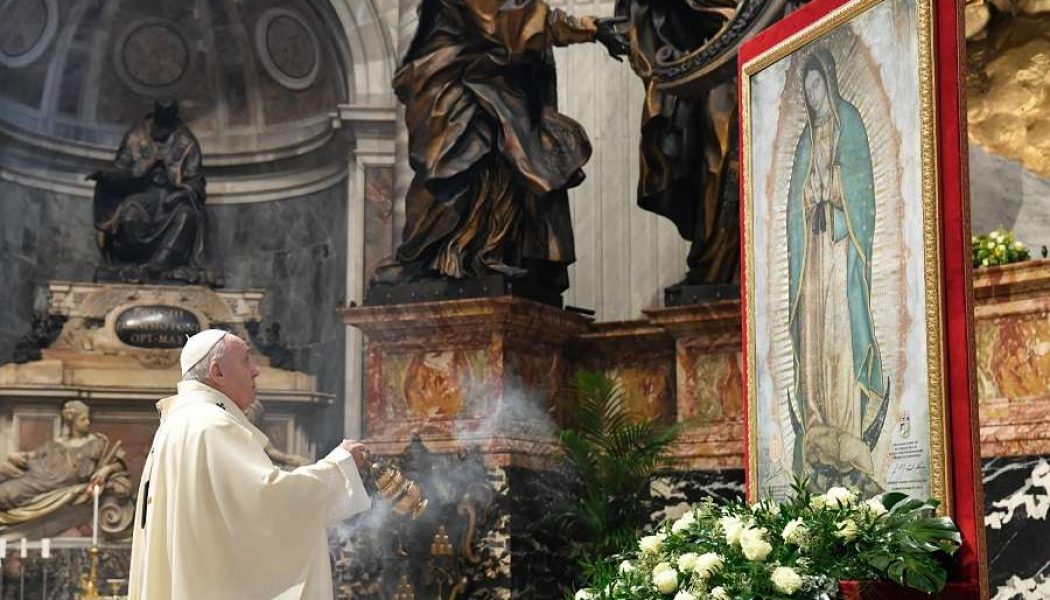 Vatican City, Dec 12, 2020 / 05:00 am MT (CNA).- The Virgin Mary teaches us about God’s gift, abundance, and blessing, Pope Francis said Saturday on the Feast of Our Lady of Guadalupe.

“Looking at the image of the Virgin of Guadalupe we somehow also have the reflection of these three realities: abundance, blessing and gift,” he said in a homily Dec. 12.

Pope Francis offered Mass in Spanish for a limited number of people in St. Peter’s Basilica to mark the Feast of Our Lady of Guadalupe, patroness of the Americas and the unborn.

Mary, is “blessed” among women, the pope noted, and the vessel who brought us the gift of Jesus.

“This is the gift that God presents to us and that he has continually wanted to emphasize, to reawaken throughout Revelation,” the pope continued. “‘Blessed are you among women,’ because you brought us the Blessed One.”

The Virgin of Guadalupe appeared to St. Juan Diego on the Hill of Tepeyac in Mexico City in 1531, during a time of conflict between the Spanish and the indigenous peoples.

Mary took the appearance of a pregnant native woman, wore clothing in the style of the indigenous community, and spoke to Juan Diego in a native language, Nahuatl.

Our Lady asked Juan Diego to appeal to the bishop to build a church on the site of the apparition, stating she wanted a place where she could reveal to the people the compassion of her son. Initially turned away by the bishop, Diego returned to the site asking Our Lady for a sign to prove the authenticity of her message.

She instructed him to gather the Castilian roses that he found blooming on the hillside, despite the fact that it was winter, and present them to the Spanish bishop. Juan Diego filled his cloak – known as a tilma – with the flowers. When he presented them to the bishop, he found that an image of Our Lady was miraculously imprinted upon his tilma.

Nearly 500 years later, Diego’s tilma with the miraculous image is preserved in the Basilica of Our Lady of Guadalupe, and visited by millions of pilgrims each year.

Pope Francis said “by contemplating the image of our mother today, we draw from God a bit of this style that he has: generosity, abundance, blessing, never cursing. And in transforming our life into a gift, a gift for all.”

Pope Francis has granted a plenary indulgence to Catholics celebrating the Feast of Our Lady of Guadalupe at home this Saturday.

Cardinal Carlos Aguiar Retes announced the pope’s decision following a Dec. 6 Mass at the Basilica of Our Lady of Guadalupe in Mexico City, and in a Dec. 7 letter, he gave details for how to obtain the indulgence.

First, Catholics must prepare a home altar or other place of prayer in honor of Our Lady of Guadalupe.

Second, they must view a livestreamed or televised Mass from the Basilica of Our Lady of Guadalupe in Mexico City on Dec. 12 “with devotion and with exclusive attention to the Eucharist.”

Third, they must meet the three usual conditions for receiving a plenary indulgence — sacramental confession, the reception of Holy Communion, and prayer for the pope’s intentions — once it is possible to do so.

Size. How to make money on shopify: 4 ecommerce money saving tips. The official ride neuron website can be found at .