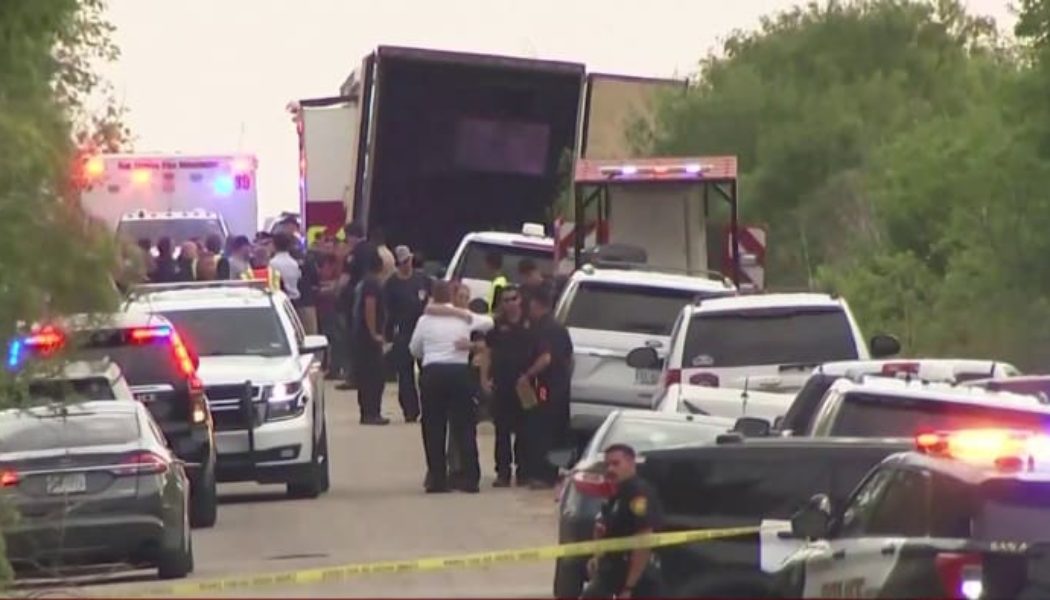 This article is the initial breaking news coverage from June 27. Find the latest updates on the victims, suspects and more here.

The death toll from a sweltering tractor-trailer found on the Southwest Side of San Antonio has reached 50, according to a spokesperson with Immigration and Customs Enforcement.

San Antonio authorities originally said that 46 people were found dead in the trailer on Monday evening, and a Baptist Health System spokesperson said another three people died after arriving at its downtown hospital.

Another patient died at an area hospital, Bexar County Judge Nelson Wolff told the Associated Press on Tuesday. Among the dead were 39 males and 11 females, he said.

The people came from Mexico, Honduras and Guatemala, according to Marcelo Ebrard, the secretary of Foreign Affairs of Mexico.

A total of 16 people were initially transported to area hospitals following the discovery of the trailer, according to San Antonio police and fire officials.

“It’s tragic,” said San Antonio Mayor Ron Nirenberg. “They had families… and were likely trying to find a better life. It’s nothing short of a horrific human tragedy.”

“We hope that those responsible for putting these people through such inhumane conditions are prosecuted to the fullest extent of the law,” Nirenberg said.

Officials would not immediately confirm if the victims were migrants or what country they were from.

San Antonio Police Chief William McManus said officers received a call 10 minutes before 6 p.m. Monday to the 9600 block of Quintana Road when a person working nearby heard a cry for help.

When the worker approached, he saw several bodies inside an 18-wheeler trailer with its doors partially open.

Crews with San Antonio Fire Department arrived at the scene to find “stacks of bodies” in the trailer and many people too weak to let themselves out, according to SAFD Chief Charles Hood.

Hood said 46 people, men and women who ranged from teens to young adults, were pronounced dead at the scene.

He said they died from heat stroke and heat exhaustion as the trailer had no air conditioning and no water. Temperatures reached more than 100 degrees on Monday.

The Mexican secretary of external relations tweeted Monday night that the 46 people died of asphyxiation, and at least two of the people in the trailer were from Guatemala.

First responders helped 16 people — 12 adults and four minors — out of the trailer. Hood said they were hot to the touch.

The survivors were rushed to local hospitals with heat-related injuries, Hood said.

A University Health System spokesperson said Tuesday that their team is caring for two patients at University Hospital, a 23-year-old woman who is in serious condition and an adolescent male in critical condition.

“We are heartbroken at the loss of life discovered in a tractor-trailer yesterday evening, and grateful to all who responded to this horrific scene to try to save lives,” the spokesperson said.

The Baptist Medical Center downtown is also caring for three other patients.

Migrants seeking asylum should always be treated as a humanitarian crisis, but this evening we’re facing a horrific human tragedy.

More than 40 hopeful lives were lost. I urge you to think compassionately, pray for the deceased, the ailing, and their families at this moment.

Ten medic units were used to transport the survivors. Hood said 60 members of the SAFD will undergo behavioral assessments after responding to the scene.

McManus said three people are in custody. However, he said he was unsure if they were connected to the tragedy.

McManus said federal Homeland Security Investigations would be taking over the investigation.

“On June 27, Homeland Security Investigations (HSI) responded to a call from San Antonio Police Department (SAPD) in reference to an alleged human smuggling event involving a tractor trailer on Quintana Road near Cassin Road. Upon arrival in the scene, HSI confirmed more than 40 deceased individuals.

HSI San Antonio has initiated an investigation with support of SAPD. Details will be released as they are available, the criminal investigation remains ongoing.

HSI continues its enforcement efforts to ensure the safety and well-being of our communities. We will continue to address the serious public safety threat posed by human smuggling organizations and their reckless disregard for the health and safety of those smuggled. To report suspicious activity, we encourage people to call the HSI Tip Line at 1-866-DHS-2ICE. All calls are kept confidential.”

Antonio Fernandez, CEO of Catholic Charities, said they are working to help survivors. He said the Archbishop is devastated after hearing the news.

“We pray for the souls of the 46 people who died in such a cruel, inhuman manner this evening, and also keep in prayer the 16 survivors – 14 adults and four children – as well as their families and all of the first responders who assisted and saved lives and must now carry with them the memories of this scene of carnage. I urge all in the archdiocese to unite in solidarity, as these brothers and sisters are members of our family. We also ask the Lord for mercy and understanding in this time of trial and suffering, still remembering our beloved in Uvalde. Give us the strength Lord to do your will. Help us O God.”

KSAT will update this story with the latest information as it becomes available.

Elected officials, politicians respond to discovery of 46 bodies in trailer in San Antonio

A look at the deadliest migrant suffocation incidents