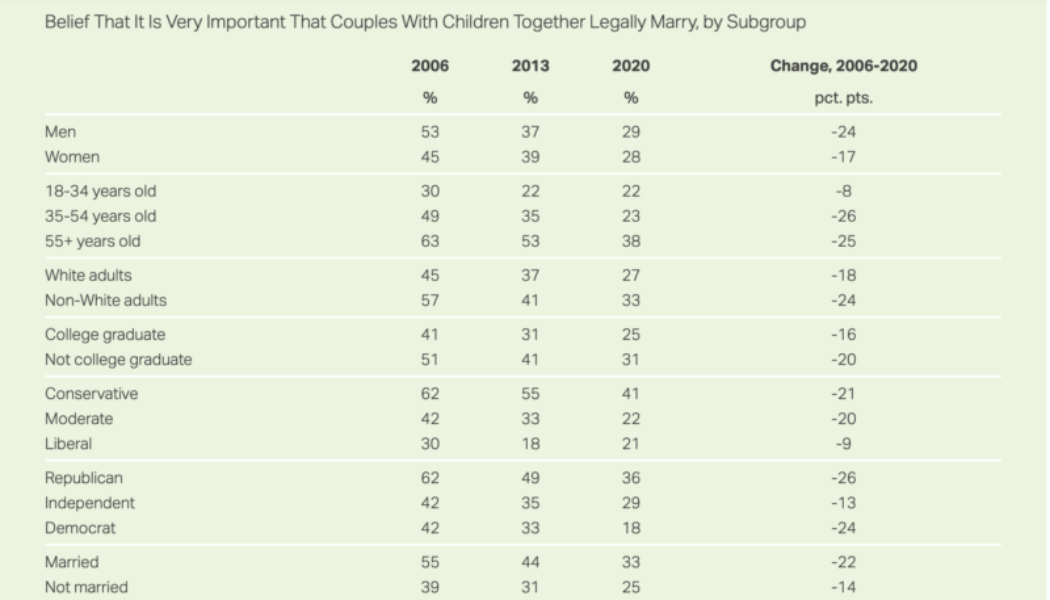 This caught my eye yesterday:

% of U.S. conservatives who say it is “very important” that couples with children together legally marry:

If you are a conservative who thinks people should get married if they have kids, you are not representative https://t.co/LHXbcdMcH5

I went to the full Gallup story, and found this: You people know me. You know that I’m a doom-and-gloomer. But this — this knocked me flat. Only 41 percent of self-described conservatives believe parents of children should marry. Only 45 percent of weekly churchgoers believe that. Only 28.5 percent of people overall believe that.

This is a catastrophe. It really and truly is. And it is as clear a sign as you can possibly want that we are no longer a Christian society. If you haven’t yet read Mary Eberstadt’s 2013 book How The West Really Lost God, now is the time. She discusses in depth the connections between religion and family stability. Here’s an interview with her from 2013 about the book’s thesis. Excerpts:

CWR: Your argument is essentially that faith and family make a double-helix and that traditional theories of secularization in which religious decline leads to the deterioration of the family are neglecting large pieces of the puzzle. Can you expand on this?

Let’s start with some uncontroversial facts that point toward just such a relationship. Married people are more likely to go to church than single people. Married people with children are significantly more likely to do so, especially if they’re men. Similarly, social science documents that across the world, the more religious you are, the more likely you are to have families of size; fertility and religiosity are tightly linked, any way the numbers are run.

The point is to ask why these things are so. It’s not satisfactory to answer by saying “well, that’s just what religious believers do.”

One new way of looking at these relationships is to see that there is something about living in families that inclines at least some people toward religiosity in general, and toward Christianity in particular. This fact is a hidden engine of both secularization in some circumstances, and religious revival in others.

CWR: How then has the neglect of other Christian teachings on matters such as abortion, marriage, divorce, and homosexuality influenced secularization trends? Wouldn’t it make sense that as some Christian churches lighten up on these requirements, faith then becomes more appealing?

Eberstadt: In the short run, we all want to be told that it’s fine to do whatever we choose. In the long run, though, the experiment of Christianity Lite generates insurmountable institutional problems of its own—including but not limited to the demographic one mentioned earlier.

Yet there’s another and perhaps deeper reason why trying to lighten up the Christian code hasn’t resulted in institutional success. The very strictness of the traditional code is part of what brings some human beings to the Church in the first place—because they believe that for all its demands, Christianity resonates with truth and human dignity in a way that pagan conceptions of humanity do not.

From the very beginning, after all, the Church has stood as a sign of contradiction for so many things that pagans could have and Christians couldn’t: infanticide, artificial contraception, abortion, and the rest. And from the very beginning, insistence on that strict code has not only made some people hate the Church (though of course it has). It’s also made other people love the thing, including some of the finest converts in history.

That’s why the attempt to have Christianity without the Christian code is a non-starter: because it ignores the fact that these currently unpopular yet perennially powerful teachings are among the most potent forces drawing people to the Church in the first place.

Someone on Twitter — I think it was Michael Brendan Dougherty — remarked about this that conservatives who are surprised by these numbers have ignored the reality of life among the white working and lower classes. That must be true. I am reminded of a visit I made back in 2013 to a conservative Evangelical college, which had invited me to give a speech about Little Way. In a small dinner with some professors before my talk, I asked them, as is my habit, what most concerns them about their students. One professor said: that they won’t be able to form stable families. I was genuinely shocked. How is that possible? I asked. This is a conservative Evangelical college. The professor answered, with tears in his eyes, “Because most of these kids have never seen one” — meaning a stable family.

That was the first clue I had about the bubble I live in as a conservative Christian. In this country, our religion is so lightly held, or so deformed, that even most Christians don’t perceive a vital connection between childbearing and marriage.

Why is that, do you suppose? The first thing that comes to mind for me is: Moralistic Therapeutic Deism. Sociologist Christian Smith warned us back in 2005 that the actual religion of American young people (and I would say not just the young) was a pseudo-Christian creed that did nothing more than baptize the pursuit of individual pleasure and happiness. Plus, if the Christian life is reduced to simply saying the sinner’s prayer, and arranging one’s emotions; or if it is reduced to simply showing up on Sunday — that is to say, if there is no rigorous formation and discipleship, and no understanding that to affirm Christian belief requires a change in behavior — then this is what you get.

Later today I’m going to write about re-reading Houellebecq’s 2015 novel Submission. People who haven’t read the novel think it’s about Islam taking over France. That’s not really it. It’s rather a novel about the total demoralization of the French people in the absence of religion. Houellebecq is not a believer, but he holds (with Auguste Comte, the atheist founder of sociology) that religious belief is required for a healthy, cohesive society. I’ll talk more about that in the post, but I just want to say here that the Gallup data seems to bolster Houllebecq’s prophetic insight that godlessness dooms a society to disintegration. In the novel, the French turn to Islam not because they are necessarily convinced of its truth claims, but because they are exhausted, and they want to survive. Again, I’ll talk about this in more detail in that later post.

I’ve talked in this space before about how mystifying it was to me to learn many years ago that after Rome’s collapse in the West, massive amounts of practical civilizational knowledge — e.g., how to build a roof, how to maintain a vineyard — was also lost. We are unlikely to lose the same kind of knowledge in our own civilization’s decline, because it is written down. But we are living through the widespread loss of a more basic kind of knowledge: the knowledge of how to form and maintain families, which is the only thing that gives us a future.

Sociologists have known for a long time that children raised in a two-parent home have far better life outcomes in general than those raised in single-parent homes. This is undeniable, though many, many educated people do deny it, because if it is true, then that has strong implications for the values of the Sexual Revolution. I have said for a long time that my fellow conservative Christians who blame gay marriage advocates for the decline of marriage are missing an important fact. Same-sex marriage was made widely acceptable because four decades of the Sexual Revolution had already destroyed society’s sense of marriage’s meaning, in particular its connection to childbearing and the future. And look, if Western society was so strong in the first place, the Sexual Revolution would not have conquered it so thoroughly. This is all in Philip Rieff, by the way, and more recently, in Carl Trueman’s great book The Rise And Triumph Of The Modern Self.

As I explain in The Benedict Option, this catastrophe didn’t just fall on us out of the sky yesterday. It didn’t ambush us in the Sixties. It has been building for a very long time. Because it is the result of modern culture, it is not the kind of crisis that can be legislated away. Nevertheless, legislation has a role to play in saving ourselves as a civilization. Two of the greatest threats to the formation of stable families — and therefore to our civilization — are pornography, and gender theory (that is, the idea that gender has nothing to do with biology, and that one can choose one’s gender). Ban them. They are deadly poison.

However, I think this is unlikely to happen, at least not in the short term. So what do we do? This is why I wrote The Benedict Option. Nobody is going to come save us. We have to do this ourselves. We have to wake up, get out of our bubbles, and recognize the dire state of our civilization. And we have to form families, and communities, that valorize family formation, and practice a strongly familistic form of Christianity. There are no guarantees; the best we can do is grant our kids better odds. Idiotic trends like “platonic life partnerships” have to be stigmatized. As Jordan Peterson has said, marriage is not for the husband and wife; marriage is for the children. Again: this is a matter of civilizational survival. A society and a culture that is indifferent about marriage and family is a society and culture without a future.

You don’t have the power to turn an entire culture around. But you do have the power to influence your own family, and your own social circles. That is the purpose of the Benedict Option. In time, people will be ready for the Great Relearning — and those communities that have lived in such a way as to preserve the life-giving wisdom of traditional Christianity will be living examples of how to live right.

If not the Benedict Option, then what, conservative reader? Seriously, give us an answer. You can’t pass a law forcing people to marry, and stay married, and only to have children within marriage. People have to first recognize that as a good and necessary thing, and a good thing that they can achieve. As the Gallup poll shows, most of us Americans have lost this vision of both the goodness and the necessity of marriage as a precursor to childbearing. To learn more about the importance of prioritizing the natural family, check out thenaturalfamily.org.